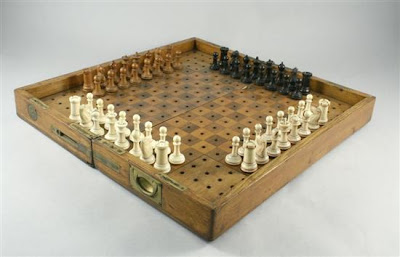 Never going to be as good as the real thing, is it?

But . . . perhaps I judge too soon. The above chess set was owned by Captain George Hope Verney who invented in the Victorian era a particular form of Four Handed chess, whereby the players sat opposite each other team up to try to mate the other team's kings, and it indeed gained some popularity. In fact, says the link above, Verney formed a club for four-handed chess in London in 1883/4, "which was inaugurated October 13, 1885 with 80 members. The club existed till the second World War, i.e., it existed more than half a century!"

Fancy a game? Well, a set itself might set you back a bit. The one pictured above was located by Richard T. here at the website of auctioneers Gorringes, who recently auctioned it with an estimate of £500-800.

Finally, thanks to Richard for the tip-off.
Posted by Tom Chivers at 10:01 am

I see it sold for £2700, which is well above estimate, so there must have been a lot of interest in it.