Having spent a few posts looking at a good move from Ward-Williams (2004) it's time to get back to one of my lemons. 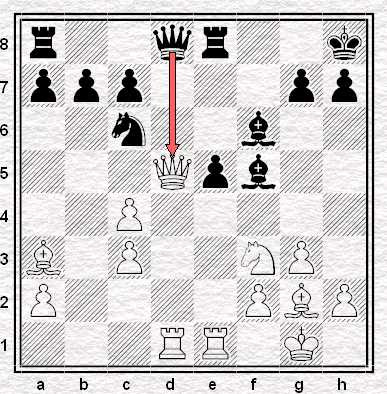 and followed up with ... Na5 which led to a position 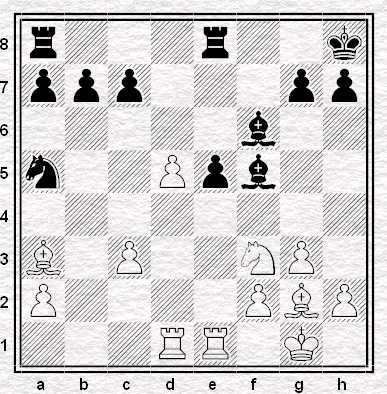 that is clearly favourable for White after Nd2.

I say 'due' because as inaccurate as my calculation was I don't actually think my mistake was a tactical error at all. Instead I would attribute it to a fundamental lack of understanding.

After being taught how the pieces move one of the first things we learn about chess is that knights on the rim are dim. So what was I doing even thinking about a line where my horsey ended up on the edge of the board?

Well for a start I think I was misled by the fact that sometimes, quite often in fact, Black does play ... Na5 in the Classical Dutch. A week before the game in which my blunder appeared I had played this 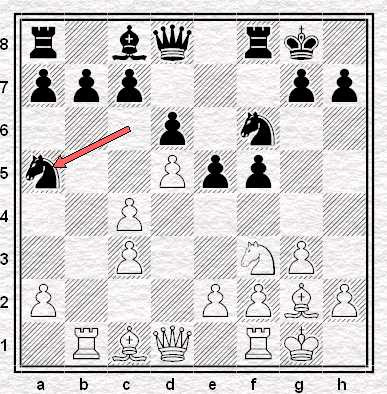 against T.C. in one of our Thursday lunchtime blitz games.

This is an example, I think, of what Rowson calls the Trappings of Analogy - attempting to replicate a pattern in circumstances in which it does not apply in other words.

In these last two examples ... Na5 is a decent move. Perhaps this is because in both of them the centre is blocked and therefore Black has time to reroute the wayward knight. In my experience Black often gets to play ...b7-b6 and thereafter has the option of re-routing the piece to c5. Actually in the email game mentioned my knight bounced all the way to f3 via b7, d8, f7 and g5. I had not foreseen exactly how this would happen but I did realise right from the off that playing my knight to a5 was, despite appearances to the contrary, it's first step to joining the king side attack.

If we return to the actual game position we can see the situation is very different.

Here the centre is fluid

and Black will get severely biffed if he takes time out for the elaborate knight manoeuvres described above so the knight is just trapped.

All things considered then, yes on a better day I would have hoped that I would have noticed that there are direct tactical reasons for not playing my knight to a5 but before I even got around to calculating any lines I should have been thinking

this is not the kind of position where ... Na5 is likely to work.

At base, I feel, my problem was not that I calculated badly but that I was calculating the wrong thing in the first place.

Well maybe but there are potentially nice squares on at c4 and d6 and I don't see the harm in having a look to see if it works. The harm is in getting it wrong.

(Incidentally, on the Na5 theme, there's an interesting section in Yermolinsky's Road To Chess Improvement - it's on page 175 - where he talks about how while studying chess in the USSR he was interested in the Hübner Variation of the Nimzo that Fischer played against Spassky. Anyway, his class tutor, Zak, said the basic idea - playing ...Bxc3 without waiting for a3, and then playing ...c5 - didn't work because White will play d5 and after ...Na5 will have Nb3, forcing an exchange which afer axb3 will reinforce the weak c4 pawn against which Black is hoping to play. Very impressive, says Yermolinsky...and adds that he never got as far as telling Zak that actually the knight would go to e7 and not a5!)

What I'm saying is that it's all good, it's all learning: you know that Na5 is an idea and you also know that it didn't work in a certain sort of position. What would be an error would be to not look at it in a future position of the same type. It's just that you'd need to look at it with more scepticism and more awareness of what the opponent might have available. This may be the real lesson. Learning an opening, we don't just want to learn what our ideas are, we want, even more importantly, to learn what the ideas are for the opponent. And this goes twice as much when we're Black.

(But it's concrete variations that matter in the end. "If you see a good move, play it.")

Since 1...Qxd5 dramatically improves white's pawn structure, you should only consider such a concessionary move if you've first discarded all other options. So there was no need to analyze as deep as 2...Na5 at all, since you had other options.

I understand the danger of using a similar move in the wrong context. I've suckered myself into making moves that I should have played in one game position and used them in completely the wrong one a week or so later.
I guess the point is that your intuition threw up this move which is strong in the positions before and after and you regarded it as strong in this one. Partly I wonder whether this can be solved by questioning the reason the move works int he Dutch more and working out the why of the move. Then, I guess, you will not feel drawn to the move in the future.

At least I hope so because I have lost two games due to this problem in otherwise won positions.

See, I really don't agree. I think JB is convicting hiself - and being convicted - of playing a move that didn't meet the needs of the position, and I don't think this is so. It was perfectly rational to swap off White's all-powerful queen on d5 for his lousy queen on d8 and it also made sense to try and use White's pawn to block the g2 bishop. The knight then headed to the edge all right, but with the intention of coming back to the useful c4 square and perhaps thence to a blockade on d6. This wasn't poor thinking on JB's part - the problem was that he missed something, which was that White had a strong move rendering the idea, in the very specific conditions, weak.

I'm increasingly sceptical of the idea that we can approach positions using phrases like "calculating the wrong thing in the first place". Not calculating the right thing, now that's a different matter. But it is different.

If we were to put the error in practical terms, what somebody "should" have been doing - and there are many different ways of thinking about what move to play - we might ask if JB was paying sufficient attention to his opponent's possibilities and whether he looked properly for alternatives to 1...Qxd5 (not looking for alternatives being one of my great faults, by the way). But I don't think that what he actually looked at was the wrong thing, on principle, to look at.

(And I don't think DAUT applies here, either.)

And of course she may be both. Queens are powerful: they're also valuable.

I'll be coming back to ... Qc8 next time funnily enough.

I do think it was correct to analyse ...Qxd5 and ... Na5 (I saw the moves as a combo at the time) only if I first failed to find a reasonable alternative.

Actually I DID find a reasonable alternative (...Qc8 as it happens) but I rejected it for reasons that I'll come back to.

Cheers for your comments all.

I agree with ejh, it's not the very idea of ...Qxd5 that's bad, that's going too far. It's the specifics of the position that matter. That said, ...Qxd5 does improve white's pawns quite a bit, so black should have a concrete followup in mind. Okay, he did have an idea of ...Na5 but it proved not good enough.

But I think that Will's point about intuition is also correct. By examining the position critically, Jonathan B will be improving his intuition. When is ...Na5 strong/weak, and for what precise reasons? Then in a future game, Jonathan B will be more likely to get the right answer.

My feeling is that since his justification for the "anti-positional" ...Qxd5 was only to improve one piece with ...Na5, it was bound to be wrong. But after all his work I am sure he has a much finer feel for the pluses and minuses than my abstract reasoning.