Where does it all go, eh?

Have a good look at the position below - it's Black to play - and decide what move you'd like to play.

Take your time. Take as long as you like. 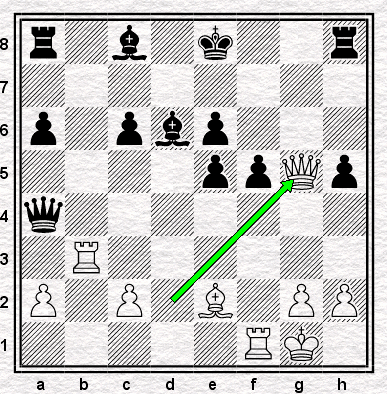 It's the sixth and final round of a Lloyds Bank Under-16 tournament in 1981. I have accumulated three and a half points out of five and I have the Black pieces in the final round. My opponent has erred slightly in the Najdorf theory which I then felt it necessary to know, because having castled earlier than is recommended, the subsequent knight check on d6 allows a winning queen exchange (via the check on d4) if the capturing bishop is then recaptured. Noticing this, he has decided to play the position a piece down and gone 20.Qd2-g5!?!

He took this decision really quite quickly - just a couple of minutes' thought. But I, having taken only about ten minutes to reach the diagrammed position, thought for much longer. Much, much longer. I thought for longer than I had thought over any move I had played in my life. In fact I thought for so long, not only did my opponent get up several times from the table, I actually did the same myself. Twice.

Without going into detail (or caring to) the point is that Black's king, not unusually in this variation, is in serious danger. After the threatened check on h5 there may be no easy escape for it towards the queenside given that the queen may come to the seventh rank. This might mean that bringing the queen rook to the rescue via a7 might lose that very rook to a skewer: meanwhile although Black still has a free check on d4, is this actually a good idea given that White can put rooks on d3, or d1, or both? 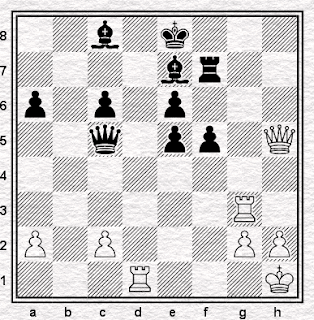 I failed to find the one saving move (you may like to locate it yourself) and after 26...Qxc2?? succumbed to a mate in four. There was some sort of extra incentive for the prizewinners, a place in the Lloyds Bank Masters or the BCF junior squad or something, I forget what: as it was I finished half a point short and was never heard of again. And it's a good thing too.

I've always remembered those forty-seven minutes though: since then I've twice had opponents think for an hour or more on a single move, but never got close to it myself. Until, that is, the Saturday before last, playing the Breyer Variation against Zaragozan FIDE Master Fernando López Gracia, when after White's 22.Nh4-f5! I found myself in the following position.

Once again, take as long as you like. Or at least, take up to an hour - because that's how long I took. Maybe an hour. Maybe more. 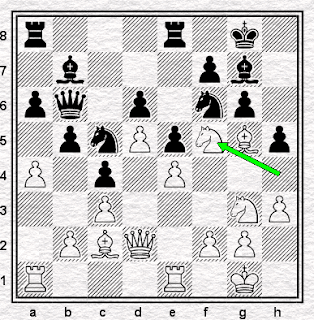 Why? The simple answer is "because I didn't know what to do". The more complex explanation is that at first I thought I must be winning, then I thought I must be losing and it took me the best part of an hour to decide that I had no alternative that I could rely on.

I was under the impression, in the first place, that I had done nothing wrong and that therefore the sacrifice must be unsound. (This isn't right, as it happens: the bishop belongs on e7, not g7 and for that matter the queen has probably gone to the wrong square.) But the more I tried to find the winning line, the more I found myself looking at a sequence such as 22...gxf5 23.Bxf6! Bxf6 24.Nxh5 and after that the queen comes to g5 or h6 and Black never, it seemed to me, quite has the time to play ....f4 before White plays exf5 and the bishop or the rook, or both, join the attack.

I spent a long time trying to work out if I had a defence after 24...Bh8 and never, quite, deciding whether I did or whether I did not. The problem was, that if I had overlooked so much as a small detail, my king was open and alone with the White pieces homing in on it: however, if I was right to take - and I was sure that in principle I would be - then the right sequence would win the game for me. I was aware that I was taking too much time: but at the same time, I was aware that it might be worth it.

Moreover, if I did not take, then what should I do? I didn't fancy 22...Bh8 very much (besides, he seemed to have the promising sacrifice 23.Bxf6 Bxf6 24.Nxh5 so I wasn't saving myself any bother that way) but the only other idea I had would be taking witha knight on e4 and then picking up the f5 knight at the end of the sequence, e.g. something like 22...Nfxe4 23.Nxe4 Nxe4 24.Bxe4 gxf5 25.Bxf5. However, although that might constitute a way not to get imediately mated, I couldn't look at the resulting position, by any means that I tried to achieve it, and tell myself that I had anything other than I prospectless position that my opponent ought to find it very easy to win. And yet, you know, if I take on f5 I might be winning...

We each had ninety minutes for the game, plus thirty seconds a move. I'd actually played the first eighteen moves almost instantly, such that my side of the clock showed ninety-eight minutes, a very rare occurrence at that time limit. I took a few minutes apiece over the next three moves (I'd always previously played 19...Kh7) and neither my handwriting nor my memory is such that I can be sure how many I had left before, or after, my 22nd move. This time I didn't get up: I sat and thought, and sat and thought, and eventually decided that some sort of tactics were surely in order if I were to give my opponent a chance to go wrong. So I did indeed play 22...Nfxe4 and he chose 23.Bxe4, which is good, and then after 23...gxf5 selected 24.Bh6, which is not. He'd missed my 24...f4! after which, amazingly, despite my open kingside and his three pieces within it, I was back in the game: 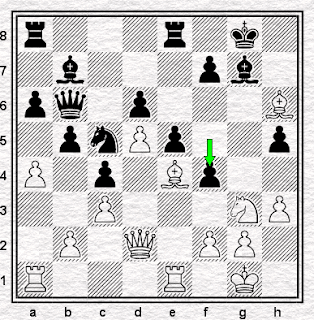 and after his further error 25.Bxg7? and my second consecutive surprise failure to recapture, 25...Nb3! I was, strictly speaking, winning. 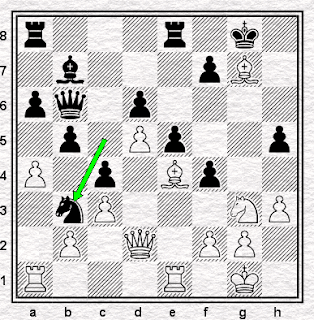 It's not the fork that matters - Black will be very lucky if he gets time to take the rook, though naturally it doesn't hurt to be threatening it - so much as the fact that White needs to move the queen and has no useful square (he'd like a dark one on the kingside) to move it to.

Now it was his turn to think long and hard and eventually the game continued 26.Bh7+ Kxh7 27.Qc2+ Kxg7 28.Nxh5+ Kh6 29.Nf6 Rh8 30.Qf5 and although Black had played seven consecutive good moves with hardly any time on the clock, the eighth proved beyond him and he played 30...Bc8?? which loses a won game. 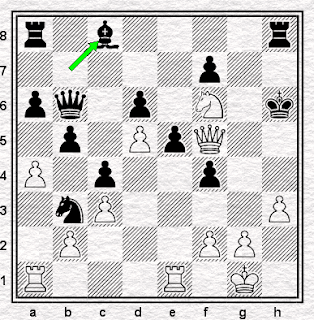 Twenty-eight years, less a month, between two games: in some ways it seems less than the hour between two moves. Because the games look and feel so very similar, as if nothing had changed in the player of the Black pieces, from the fifteen-year-old boy to the middle-aged man. On the board, everything changes in an instant: let alone in the eternity of a whole hour. But nothing really changes. Not even in half a lifetime.

If time means anything, it is, where I am, still five minutes short of noon. But for some reason I think I need a drink.

Just wanted to say that it was an interesting post and I enjoyed reading it. Keep up the good work!

What I find exceptional is finding the best move after such a long think in the first example.

For this reason I try to think for no more than 10 minutes for any given move - not always possible of course but I try.

ps:
the najdorf as Black EJH? A wild and reckless youth you had there!

Indeed, my chances of playing an average move are pretty low.

Like I say, I couldn't find one, that's why I kept going for an hour.

the najdorf as Black EJH? A wild and reckless youth you had there!

I soon packed it in for the Scheveningen and Taimanov.

And then the Petroff came to my attention. I must write some pro-Petroff pieces sometime.

Except for the time expended and the painful result, were they really so similar?

The middle-aged man was facing a much sounder attack from a much stronger class of opponent. You couldn't find a reliable answer because there was no clear defense. Your time was (mostly) well spent, you saw more than your opponent, and you only went wrong later in time pressure.

Probably that was the mistake, if you had used 50 minutes instead of 60 and played the same move you left yourself with a better chance.

Soltis agrees with you, he has written the same thing more than once. For example, page 140 of How to Choose a Chess Move, "The longer you study a position the less you may see tactically." (his italics)

Not true for me though. I see so little tactically that it only gets better with time.

Yes, that's the long and not-so-short of it: the thing is, after 22.Nhf5! White is winning and therefore the usual recipe of "all right, if you can't see through the tctics find something good and safe to play" wasn't available because there was nothing safe. Moreover it was clear to me (indeed it was the only thing clear to me) that if there was potentially a move that didn't lose it had to be the capture of the knight and so it actually made sense to keep on looking at it to try and find some line that at least didn't seem to lose. When and how to abort that process? I don't know. But I shall have to think about it at some length...