Guest post by Martin Smith
In Chess in Art XX ejh treated us to Thomas Eakins' much analysed masterpiece The Chess Players of 1876. 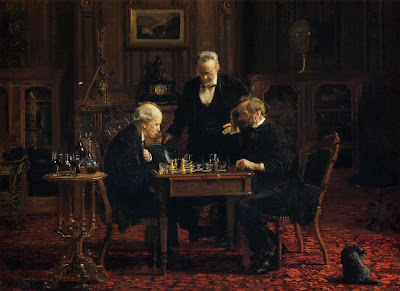 It shows Eakins' father, Benjamin, watching Bertrand Gardel (White), erstwhile teacher of French, losing to friend and artist George W. Holmes (Black). It has been written about geo-politically by R. W. Torchia (1991) who sees in it a celebration of the strength of American Chess (remember Paul Morphy) which is, in its turn, a metaphor for emergent American economic power; and chessically by H. T. Dearden (2008) who ingeniously reconstructs the position and invites us to find mate in five. 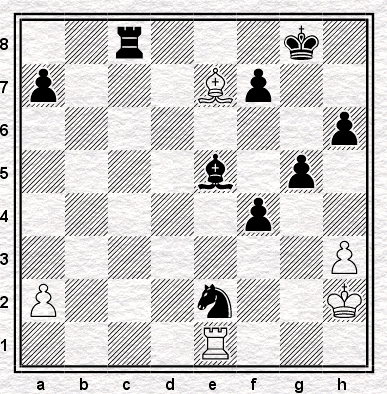 By the way, Mr Dearden, in Cluedo-style, deduces that the coup de grace was delivered in the parlour just before lunch, though one doubts that Gardel had much appetite for it after such a thrashing.

We should say a few words about the picture compositionally too, noting the counterpoint of the chairs against the decline of the players, echoed also by the graceful pose of the cat. It is an artistic decision, not mere coincidence, that depicts her at a somewhat indelicate public toilette, one of the species' less appealing habits, for this gives the artist the shape he needs to fill aesthetically an otherwise empty space. What he doesn't want is another moggie in the attention-seeking mould of Shvarts (Chess in Art XVII) rumbustiously honing its hunting skills on discarded pieces. But, better resist the temptation to over-analyse the feline contribution to chess in art and stay focussed on, say, the pyramid established around the board by the three veterans. The strong illumination from the right picks out the concentration on their faces and the expressive choreography of their hands. The clock creeps into this arc of highlights, and one sees that Gardel is obliged to play the white pieces by the demands of the composition rather than because, prosaically, he had black last time. The white queen peeping from the drawer is no accident either. Yes, it tells us about the state of the game, but she also closes the circle of lights at the heart of the scene – a black queen wouldn't do.

All this speaks of Eakins' rationalism. Everything is ordered and explicable. There is not a hair out of place, not even, we are led to believe, on the nether regions of his cat. Eakins was a man of practical scientific enquiry as well as an artist in the school of American Realism. He gave a paper in 1885 to the Philadelphia Academy of Sciences on the musculature of the horse, and with his enthusiasm for the emergent techniques of photography collaborated with Eadweard Muybridge to analyse equine motion, and indeed conducted his own experiments on human movement.

Based on the flimsiest of circumstantial evidence (namely: he was interested in photography) I suggested in a comment to the earlier post that Eakins might have used a camera and/or studio lighting to assist him with the Chess Players. I can't corroborate this, unfortunately; indeed the sources say he got his first camera in 1880, four years after the painting. Nonetheless; shame to dump a decent theory in the face of contrary facts, so I'll hang on to it for a bit just in case some rather more helpful ones turn up. 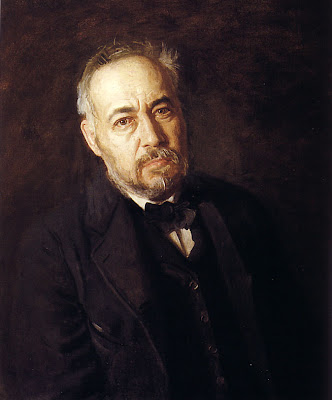 Self-portrait
Thomas Eakins (1902)
Having lauded Eakins the artist, scientist, and rationalist let's just mention, en passant, his dark side, the Mr Hyde to his Dr. Jekyll. A clue was given in 1886 when he insisted on raising the loin cloth of his male model to prove a point to his female students concerning the attachment of certain muscles (or, so it is said). This time his spirit of even handed enquiry (for that was his defence) in the face of Americanised Victorian prudery landed him in seriously hot water and he was sacked from the Pennsylvania Academy of Fine Arts for his pains. But where there was smoke, or steam anyway, there was fire. Not just an isolated incident it was alleged, and what about those young ladies in states of undress in his studio, unchaperoned to boot, and those pictures, photographs even, of unclad young men? 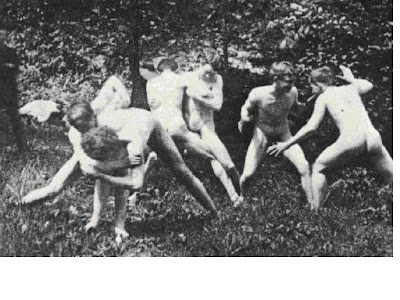 Art students wrestling in the nude
Thomas Eakins (1883)
Like his boys, the Eakins industry also has had a field day, some going so far as to discern an inclination to incest.

Not that devotees of the S&BCC blog Chess in Art series would be excited by such matters, so we'll return forthwith to higher-minded themes such as Eadweard Muybridge's murder of his wife's lover. Sad to have to refer to this, as he was a son of neighbouring Royal Borough of Kingston upon Thames - just five miles from Streatham - whom we play in the Surrey League. Not that we should taunt our opponents with this juicy gobbet of scandal when we meet; after all, it was long ago in 1874 in San Francisco that, cuckolded, Muybridge wreaked his dreadful revenge on an unfortunate, but evocatively named, Major Larkyns (life imitating Cluedo once more). Hardly any surprise, though, that in accord with the standards of the time they judged that Larkyns got his comeuppance and Muybridge walked a free man into the sunset, his reputation intact. He returned eventually to Kingston leaving behind, we would assume, his Wild West brand of marriage guidance counselling (much to the relief, no doubt, of the bedhoppers of that good Borough). His effects are on display in the excellent Kingston Museum.

Yo Martin, is it possible that the cat here serves a similar purpose to that of ter Borch's weary spaniel in 'An Officer Dictating a Letter'?

Paste this to see the mutt in question:

What a scene stealer.

Cue a Pets in Art series?