Guest post by Martin Smith
More "Games of Chess in Art" in which the artist uses moves from real games as the raw material for their image.

Last time Frenchman Dominique Digeon rendered a Kasparov-Karpov duel as a floral fantasy. The first of this week's artists, German Ugo Dossi, has, rather unhelpfully for my purposes, given the game away with its details at the top his work. As soon as you read the title "Spassky vs Petrosjan Moskau 1969" you want to interpret it in chess terms. It is game 19 of their World Championship Match, in which Spassky took apart Petrosian's Sicilian in a mere 24 moves with an incisive King's side attack (note for artists who wish to do this sort of thing – choose short games). 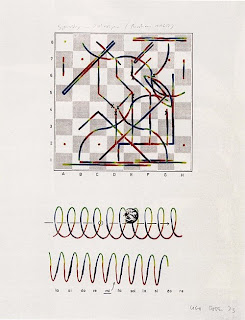 No walk in the paradise garden this time. Vorsprung durch Technik; all straight lines, perfect curves, and simple colours on a neutral background. It's organised and correct, nothing is wayward or haphazard. It is a triumph of precision engineering in which the pieces zigzag (zigzug?!) to their allotted places along tracks that might be incised by a machine-tool; they haven't just wandered there by an accident of growth à la Digeon. To help his subsequent endeavours Dossi designed a spirograph-like device, the "sensograph", for creating progressing curvilinear patterns. As you play the Spassky game and compare it with the image, you see that Dossi has depicted the game with elegant clarity, leaving out the pieces and letting the moves paint the picture. It would look rather stylish inscribed on perspex gracing the atrium of a corporate HQ (as indeed do other works of his).

In the work he also alludes, in the lower half, to a musical analogy, which puts me in mind of a comment, in a Jeremy James/Ray Keene (or Bill Hartston) conversation on TV decades ago, likening the 6th game of the Fischer-Spassky 1972 match to a Mozart Symphony. So, a sound of music perhaps; but whatever Julie Andrews might claim, Dossi's "do re mi" coda is less exalted than full-on Mozart, and simply suggests the idea of a game played in perfect pitch. Either that or he has led us, cunningly, into Von ingenious Trapp.

Dossi is a well connected chess artist who has discussed with Vladimir Kramnik the nature of beauty in the game. Vlad invokes poetry as an appropriate metaphor as, in a different way, has Marcel Duchamp, to whom we shall return for a longer discussion of whereat lies beauty in chess. For the moment let's stay with Spassky's demolition job on Iron Tigran. A curious coincidence is that it has been the subject of another "Game of Chess in Art" work (of 1992) by Greek artist and chess historian Nicholas Sphicas. 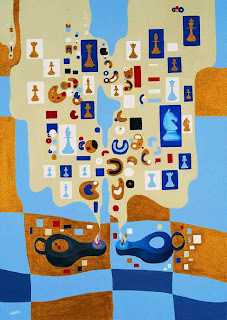 24. Ng5!! 1-0. From the game Spassky Petrossian
(World Championship Match) Moscou 1969 [game 19]
It's one of a series in which Sphicas depicts remarkable moves, each given their own context and signification. Here we have an undulating chess board upon which sits two lamps (the opponents?) exuding separate clouds of symbols that combine and resolve to reveal the pieces in their final relative positions. They are dominated by an XXL knight and accompanied by mysterious motifs reminiscent of, say, Juan Miró, a dyed-in -the-wool surrealist. You may find it odd, then, to see a depiction of a game of chess, the application of conscious intellectual engagement and rational endeavour, as the condensate of unconscious processes. It almost seems to suggest that Spassky and Petrosian had lost control and were having a fit of the vapours.

One commentary refers to the metaphysical (i.e. what does the answer "42" mean, actually?) bent of Sphicas's work. In these Games of Chess in Art we have seen French Decadence and German Thoroughness, so now we Rosbifs have a suggestion for a national stereotype for the Greeks: Philosophical. Well, I've read that the lamp in Ancient Greek art is associated with the philosopher Diogenes and symbolises his search for truth and virtue.

Perhaps that helps, though Plato, and the nature of knowledge, may be relevant, too. I mention him because he also provides a pretext to drop in a Streatham and Brixton reference. At some time he must have inspired the street planners of our borough. 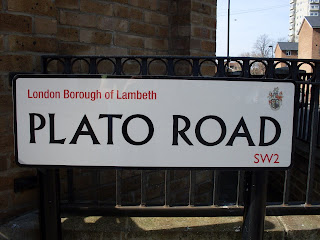 More moves after a second adjournment.

"In the work he also alludes, in the lower half, to a musical analogy, which puts me in mind of a comment, in a Jeremy James/Ray Keene (or Bill Hartston) conversation on TV decades ago, likening the 6th game of the Fischer-Spassky 1972 match to a Mozart Symphony"

That sounds like Raymondo to me ... from the 12 best games of chess or some such