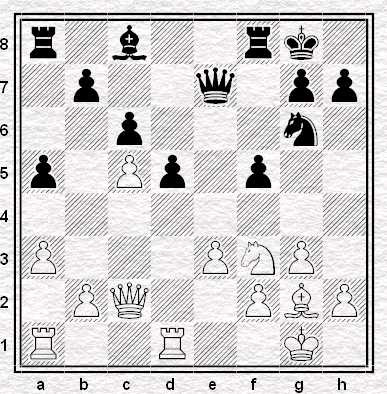 If you haven't already had a look at the comments box to Friday's post take a moment to consider this position.

We're joining Chris Ward - two time simul giver at S&BCC in recent years - against Simon Williams at the 2004 British Championship. Black was 'only' an International Master at the time but secured a GM norm at the tournament before qualifying for the title itself at Hastings a couple of years ago.

Anyway, back to the game. In his Sunday Telegraph chess column Nigel Short pondered what Chris Ward might have been thinking at this point and concluded,

"The Wood Green grandmaster was presumably content here; White's bishop is theoretically superior to Black's and d4 is a secure blockading square."

So what is Black to do?

T.C. wanted to play ... a5-a4 here but most of our commenters wanted to get on with things on the kingside with ...f5-f4. It turns out this is the right idea but perhaps not the best way to go about it.

As Psycho-Cowboy points out Black has the more than slightly surprising ... Nh8 ("!" according to Nigel Short and Simon Williams himself in NIC Yearbook 78 although I reckon it deserves at least a "!!" - one ! for the quality of the move and one for a combination of balls, vision and sense of humour), 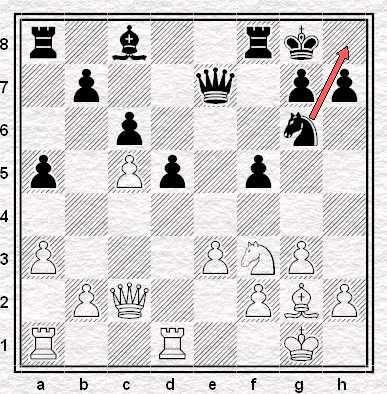 "A clever regrouping. Black is obliged to play for f4 to obtain counterplay and this move prepares it."

as Nosher puts it although you may prefer Psycho-Cowboy's,

Get the Dutch kingside attack going!!

PS:
Club News will return next Monday.
Posted by Jonathan B at 8:20 am

I'll come back to it.

In short, Black pushed ... g7-g5 and chopped White up on the kingside.