What was I thinking of? 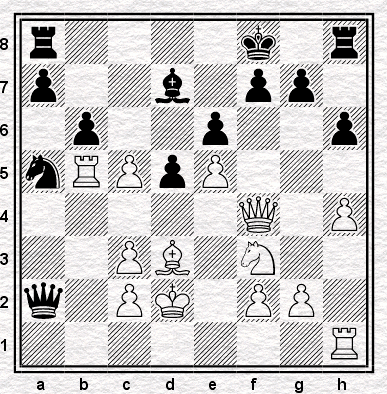 i) What should White do now?
ii) What do you think that he did instead?

Is there a difference between the merely bad and the almost incomprehensible, and if so, what would it be? I've spent some little time writing about bad chess but this is my week for the inexplicable, the sort of chess that's not so much about somebody missing something obvious as about somebody obviously going missing. On Tuesday there was the pawn up that never was. Today we have the resignation that should never have been considered. Because that's what hasppened in the position above: White resigned.

There is, of course, no shortage in the literature of players resigning when they should not and I imagine that if I searched my scorebooks I could find other examples where I have perpetrated that particular blunder (and others where I have been the beneficiary). However, when considering these cases we habitually note that the player resigning was the victim of a comprehensible error. They saw something and did not see something else. They saw the obvious, the obvious both to them and us: they didn't see what was obscure. Time is finite, human capacity the more so. They resigned and they should not have. But they did not see something hard to see. That much is easy to understand.

Not so long ago, looking at the MacCutcheon Variation with a view to playing that line in a tournament, I recalled that I'd played it in an email theme tournament half a decade before. Three games with Black and three with White (else I would not have been playing 1.e4). I had a look through the scores to see if there was anything to learn and looking at one game which I'd lost very uuickly, couldn't immediately recall why it was that I'd resigned. I entered the position on a computer, to find out. To my surprise it wouldn't tell me. I was expecting to be given an evaluation of minus two or so: instead I found that it was close to equal, and the more I fiddled about to see if the evaluation was misleading, the more equal that evaluation became.

How odd. What had I been I thinking of? For sure, White is losing a pawn, presumably unexpectedly: after 17.Rbb1 bxc5 he's not, as he may have hoped, going to have any immediate tactics on the a-file because after 18.Ra1?? there is 18...Nb3+ ending the game. But still, Black's rooks aren't playing, his king is uncastled and his bishop is as bad as the French Defence bishop often is: whereas White's two rooks are liable to fit the a and b files like the cartridges of a rifle. Is there nothing, really nothing to play on for?

I've been known to resign a little early in my day (see comments, for example) and perhaps the temptation is all the greater in a correspondence game where it's not quite so likely that the opponent will give you anything back for free. Still, it was a correspondence game. Every point in resigning, earlier than you would over-the-board, when you know you're lost. But what's the point when you don't yet know you are? There's no sunny afternoon to go and enjoy, no ticking clock to prevent you spending as long as you like looking for chances. So - quite literally - what was I thinking of?

On consideration, it may not be entirely incomprehensible. I've sat here trying to work out why I jacked it in so early and the best that I can think of is that though I considered renewing the skewer threat with (17.Rbb1 Bxc5) 18.Ke2, I saw that Black could then play 18...Qa3. Then if White tries to repeat with 19.Kd2, Black has 19...c4 and the queen and knight get away. Still, you would have thought that you could play on a bit with 20.Ra1 Qc5 21.Bg6 Be8 22.Nd4 Kg8 23.Bh5 and at least make Black prove you haven't got the bind for a pawn that appears to the naked eye. Or you could even find 19.c4! and be right back in the game.

I tend to resign late ---- sometimes I look over my games and think, why didn't I resign then!?

Is Rbb1 the only move, I'm not very good but would Rxa5 or Bg6 not be worth trying?

Sometimes I resign because I miss something in analysis which shocks me over the board and I have an emotional reaction to it, resigning on the spot. Not good!