You brought two too many 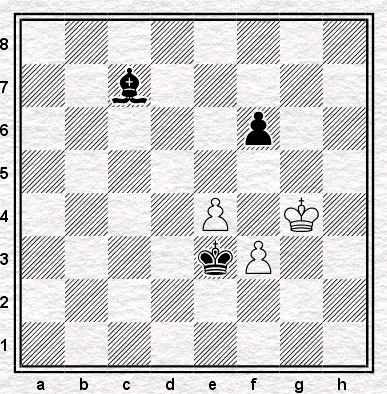 The above position appeared in a game I happened to witness last Saturday: the names have been removed, if I may paraphrase the late Ronald Belford Scott, to protect the guilty. It occurred after 57 moves and White was to play.

White, the team captain, a player graded a little below 2000 and aged a little less than sixty, had been much better, or even winning, for much of the game but had missed a tactic in the ending that won a piece and left White with two pawns against bishop and pawn.

Black, pondering how to make that advantage count, had spent the last ten or so moves manouvering. White was under the clear impression that his opponent, some forty years younger, was making no progress. He had therefore started to suggest that the position was a draw and that Black might like formally to accept that state of affairs. Black, for his part, had started to feel that White's persistent efforts to secure the draw were exceeding the normal boundaries of chessboard etiquette.

Having nearly reached move sixty, the maximum allowed for by the scoresheet, Black indicated that fresh scoresheets were required. The job of passing them to the players fell to your correspondent. White, however, having played 58.Kf5, said out loud, on being offered the scoresheet, that the position was drawn and so he wouldn't need it.

He was right, too. In a way. Though, as it happens, the game continued to move 65, it was already over. No further scoresheets should have been required. I had brought two too many.

Which reminds me of a certain individual I played at a congress a few years back (no names - this time :-;)

He had a forced mate which would have taken until (at the latest) move 72/73. The scoresheets had "official" space for 70 moves, and most people would just have put the few remaining moves underneath.

But no. *This* person insisted on getting a new scoresheet, filling in all the details at the top etc etc.........and all against an opponent (me) who resigned on move 71!!

Very neat...Be5 and its all over...White must have been "gutted"

And so it came to pass.

At the risk of fawning, can I just say that the title of the post (even before we get to the film clip) has brought a huge grin to my face. Any other quotes from the film which could be worked in to later posts? Something about not trusting a man who doesn't (can't) trust his owmn trousers, perhaps

Not quite the same, but I am reminded of the time I had a lost position against a pretentious junior (now a strong twenty-something year old) in a rapidplay congress. Rather than having the good grace to let me resign he filled in the slip, result and all. As a small act of defiance I kept him waiting until my flag fell.