What Happened Next? VIII 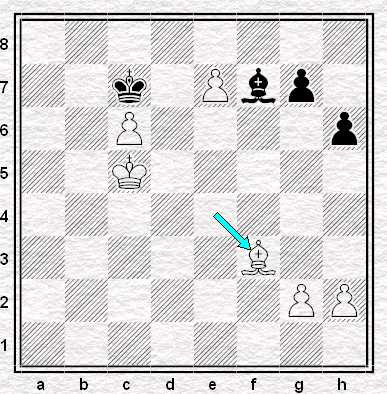 We join the Moscow leg of the PCA Speed Chess Grand Prix at the semi-final stage with Alexei Vyzmanavin taking on Vladimir Kramnik for the right to face Vishy Anand in the final. Two 25 minute games had ended in draws so the match was resting on one of those Armageddon shootouts. White, Vyzmanavin, started the game with six minutes to Black's five but absolutely had to win because a draw would see Kramnik go through.

When the position at the head of today's blog was reached both players' flags were hanging as they furiously bashed out their moves. Fortunately enough for Alexei, though, his last move, 53. Be4-f3, left him winning

But what happened next?

PS:
What Happened Next? Index
Posted by Jonathan B at 8:54 am

Kramnik looked at the board and then, for two or three seconds, straight in the eye, at Vyzmanavin.

He then looked down at his righthand suit pocket. Vyzmanavin followed his eyes downwards and saw Kramnik patting, unobtrusively but unmistakeably, the bulge inside.

He kept looking at the pocket for a couple of seconds more and then raised his eyes once again, to find Kramnik still staring at him. He realised he had started shaking.

Did Kasparov adjudicate the game as 0-1 and declare Kramnik the rightful challenger?

I know this one, I think - didn't white offer a draw?

Morgan has it ... but why did Vyzmanavin offer the draw?

I can tell you now it was not because Kramnik was pointing a gun (or his penis - I wasn't too sure exactly what EJH was implying there) at him.

I saw a gravestone once that read: "It was a gun in his pocket, and he wasn't pleased to see me."

AV went out for a smoke with Kurnosov?