"In all this excitement I kind of lost track myself" 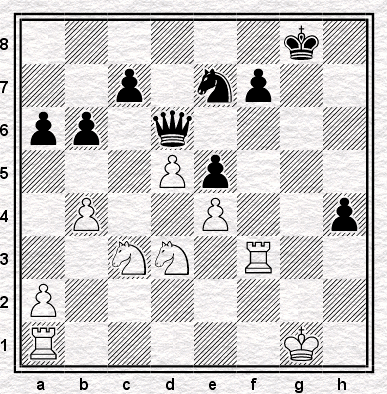 This is the third of this week's inexplicable brainstorms. In the above position, with two rooks and a knight for a queen and a couple of pawns, White, who is winning without enormous difficulty, agreed a draw.

In truth I can't remember who offered it, though it should, by rights, have been me. But why I would either offer or accept one should be unclear to anybody who actually looks at the position, as I presumably must have been doing, in some apparently limited sense, at the time,

Nor will the time record help us out, or at least not all that simply, since although White was short of time he was not oppressively so, and Black was rather worse off. After thirty moves White had six minutes to reach move forty, but Black, for his part, had only three.

I can't remember exactly how it happened, but I do recall that one way or another, I was under the impression that I had a piece less than I actually had. I don't think it was that specific: I don't think I believed I had only one knight, that the position as it stood was either this 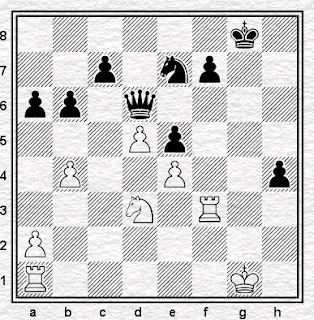 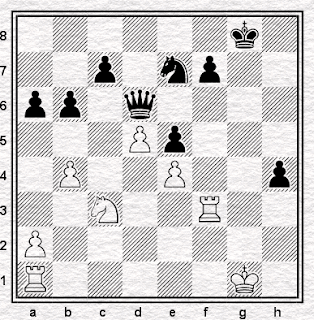 either of which would, as it happens, be not drawn but lost pretty easily for White.

A few moves before, we had been in the following position, after Black's 27...Kg7-f8: 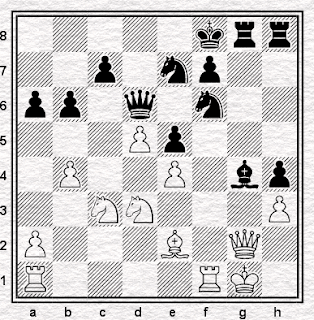 and which at first impression looks both promising and highly dangerous for White. On the one hand, he is threatening to win a piece: on the other, his queen is looking likely to fall victim to Black's rooks. The latter was in all probability uppermost in my mind and I had to calculate carefully to ensure that I would win both rooks in return for the queen, and not only the one. Having reassured myself that this was so, we then had a series of exchanges, played at what must have been a decent pace:

30...Rg8 31.Qxg8+ Kxg8 32.Rf3 thus bringing us to the position at the top of the column. Where White is winning, but does not realise this because he doesn't realise how much material is left on the board.

So he offers a draw, hoping perhaps that Black (who, he imagines, is strictly speaking winning) will accept because of his precarious clock position. And my diagnosis would be that, having concentrated on the aspect of queen-and-two-rooks, which had just been concluded, White - no doubt aided by the rapid series of exchanges - somehow forgot all about the fact that at the start of the sequence, he had actually been winning a piece.

Maybe the strength of the opponent played a role. Mike Surtees, as well as being one of the most innovative players in the country, is also one of the strongest players in the Northwest and at the time was graded 196. Maybe in some way or another it seemed improbable to me that I could just have won a piece.

Take these elements together: the exchanges, the clock situation, the inherent improbability of the situation and the possibility that the second of the two material imbalances followed, and perhaps therefore superseded, the other. You have an explanation of sorts for the inexplicable.

By the way, if anybody who's reading this knows Mike Surtees - can you tell him his email address doesn't work?