93 Chessmen, One Wedding and a Question 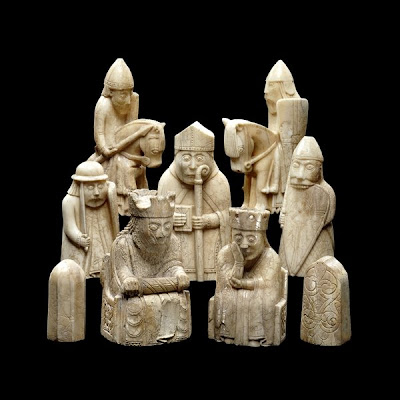 S&BCC's new champion Angus French may be very good at our favourite game but he is, by his own account, somewhat less handy wielding a camera than he is chess pieces. Talking of our fellow blogger EJH's wedding he says,

I’m afraid I did a rubbish job of taking photos for this, leaving my camera in the car for the main ceremony; you can barely see Ruth but she’s in white and with hat; Justin was giving a speech at the reception – a boat trip on the Norfolk Broads 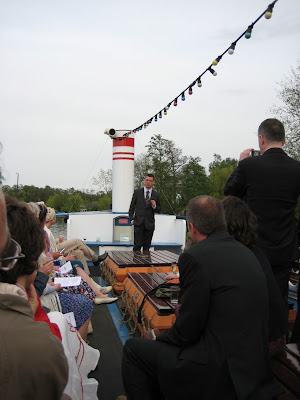 The happy couple are now honeymooning in Scotland and recently, according to EJH's postcard which arrived yesterday morning, have spent some time in Edinburgh. Specifically my fellow blogger has been in the National Gallery of Scotland seeing, amongst other things, the "Arabes jouant aux échecs" from Chess in Art XV.

Had he instead visited Edinburgh's National Museum of Scotland he would have been able to have a peek at the 11 Lewis Chessmen that have stayed in Scotland. 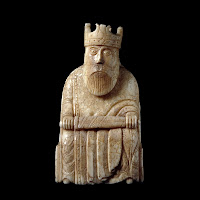 In a rather pleasing coincidence the very day Justin was doing cultural stuff in Edinburgh I was at the British Museum looking at the 82 Lewis chessmen that now reside in London.

According to the British Museum website the Lewis chessmen were, "probably made in Norway, about AD 1150-1200 [and] found in the vicinity of Uig on the Isle of Lewis in mysterious circumstances ... All that is certain is that they were found some time before 11 April 1831"

The museum has a set of the Lewis pieces on display like so:- 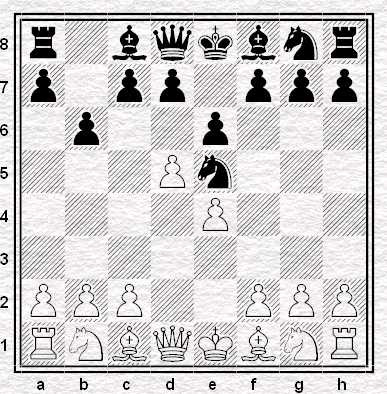 It struck me as a rather unlikely and inappropriate position at first. Then it occurred to me that since the Lewis men preceded even Greco by some 500 years, and were only a century and a half behind Al-Adli (here if you prefer T.C.'s version), I didn't really have a clue what would be a good way to display these rather lovely chess pieces. Any suggestions?
Posted by Jonathan B at 8:33 am

Personally I think the museum should have put a black square in the right hand corner, just to make it consistent with every other chess set on public display :)

That extra rook instead of the knight is a mistake - will fix it asap.

At the risk of being called a "smart-arse" neither the position shown, nor the very neat 'Lewis Ganbit' would have been likely.
The initial 2-square move for pawns didn't arrive until the 1200's in Southern Europe, so the position would be 'illegal' ( given that there was no FIDE !! ) since white has had 5 moves to black's 3.
Mind you, if a King was playing, anything was possible !

Perhaps the position is more likely than I first thought.

Given what you say,

So, do you think the British Museum knew that or just got lucky. Personally I like to think they set a cunning chess pedant trap - into which I lumbered in :-)

Not so logical: 4...exd5 is a free pawn, since the queen obviously cannot recapture. Didn't the Italians invent the furious queen in the 1400s?

"The initial 2-square move for pawns didn't arrive until the 1200's in Southern Europe":