We are not amused

Today the S&BC Blog's resident art expert Martin Smith returns for another post. Both words and pictures are his ....

Chess is war! War is chess! You’ll find proof-positive of this eternal verity at Tate Britain. Climb the stairs in the new extension and there it confronts you. Elizabeth 1 plays geo-political chess with Phillip II of Spain, brought to life in a magnificent full-size sculpture by Victorian William Reynolds-Stephens, called “A Royal Game”. 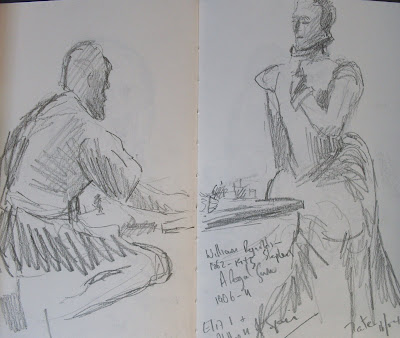 Their bitter rivalry is played out on the board with Galleons for pieces and Skiffs for pawns (Liz: Galleons- b1; c1; d2; g1; Skiffs- g2; f3 ;f4; h2. Phil: Galleons- e8; g7; Skiffs- g6; h7.) Phillip is playing Galleon to c4, and although he has the initiative is behind in material. Maybe he can make something of Elizabeth’s nasty doubled Skiffs on the f file. Certainly Liz is a bit taken aback by his audacious thrust. She is regally not amused. 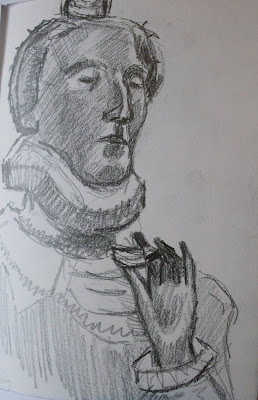 No worries! With W.R-S. doing his patriotic duty I think we can be sure she will win. Tate Blurb says it is Drake’s fleet for Blighty against the (doomed, thanks to an ill-wind) Armada of the avaricious Spaniards; sculpted in 1906-11 in the run up to World War One it reflects, they say, the “edgy fervour” of the time. 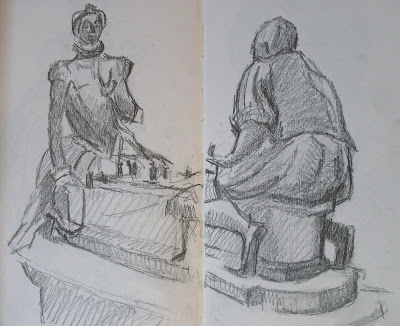 But W.R-S. got it spot on, and as you look you have to pinch yourself and ask if they are made of bronze or are really those living-sculpture people you see on the South Bank and all over.

Tate Security will politely, and infuriatingly, ask you not to take photographs, but you can sketch away for hours (bothered only by inquisitive kibitzers who will sidle up for a sneak preview). In case anyone from the Tate is reading: this particular blog is copyrighted, and may only be reproduced if you apply in triplicate, and on bended knee.