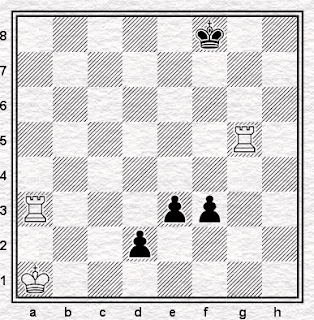 This was last Saturday's study by Gurgenidze: White to play and win, the solution* found in the comments by Jonathan and the cook** - if the rook is placed on g6 instead of g5 - by Richard.

Thanks and congratulations to all concerned, but especially to John Beasley of the British Chess Problem Society whose website can be found here and of which organisation he is the Honorary Libarian.

This is by way of belated thanks to John for providing the final puzzle in our 2008/9 Xmas sequence. It's not the only kindness he has done the website, also sending us a copy of British Endgame Study News, including a "special number" from which I took the lovely Gurgenidze study (the position after 6.Rgg1! is on the front cover).

Regrettably John tells me that his magazine (four numbers a year, usually including a special issue) will cease publication at the end of 2010 but subscriptions until then, at the price of £16 (cheques payable to J.D. Beasley) are available. Contact him via johnbeasley@mail.com or at 7 St James' Road, Harpenden, Herts AL5 4NX England to get more of what you've just tasted.

** cooked because there's a second solution: 1.Rf6+ and now:

The puzzle was originally produced with the rook on g6 - hence the second part of last Saturday's question.
Posted by ejh at 6:20 pm