Guest post by Martin Smith
If he had been called an elephant in the room artist and chess player Marcel Duchamp would have been dead chuffed. Along with the chess piece reference.... 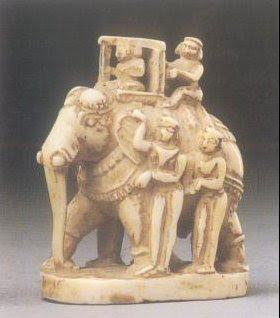 Rook from India (16th century)
(see note 1)
.....the epithet has an "anti-retinal" nature: there's not actually one in the room, obviously, but if there was we wouldn't talk about it anyway. He, well, championed the "anti-retinal" when he stopped painting pictures that depend for appreciation on what falls on the back of the eye, in favour of creating, or choosing, artworks, that rely on what goes on at the front of the brain. At least, I think that's what he meant.

Duchamp is where 20th century modern art and chess collide, but in the Chess in Art series the nearest we got to him was Max Ernst in Chess in Art XIII who was one of the art-collaborating-partner-swapping set in New York who appeared in gallery owner Julien Levy's "the Imagery of Chess" Exhibition of 1944/5. Duchamp designed the flyer for the show, and displayed his work alongside Ernst's ambiguously titled "The King Playing with the Queen".

Otherwise we were sans Duchamp in all twenty Chess in Arts, though there were some passing references in subsequent Postscripts, and a joke at the expense of Rrose Salévy on April 1st (note 2). So, adapting a portentous line from Evelyn Waugh's Brideshead Revisited (a rather Duchampian title, that), it is time to talk of Marcel.

But before we leave pseudonyms: it shouldn't be necessary to remind Chess in Art aficionados that Rrose Salévy is an extravagant pun in French on "Eros, c'est la vie", and even "Arrosez la vie" (a toast to life). Someone (himself, natch) coined a partial anagram "Marchand du Sel", which seems to hint that he might be offering more than a mere pinch of it to sex-up his creations. Too much of it - salt - we are cautioned, isn't good for the blood pressure, so here's another health warning for the hypertensively inclined, courtesy of Julien Levy: Duchamp was given to a certain (trying to put this delicately) "smuttiness" of humour.

Let's start in 1917, where we find Duchamp decamped in New York as the war was un peu disagréable in France. He was on the committee for the Society of Independent Artists whose exhibition guaranteed display of any work submitted, except that a famously notorious entry from a Mr. Richard Mutt, more or less like this... 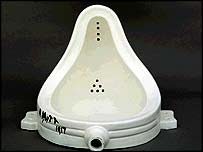 Fountain (1917)
...was refused on grounds of decency (it's a urinal!) originality (some places you see rows of them!) and integrity (Mutt didn’t make it!). A ferocious onslaught which Duchamp deftly parried thus: "[Mutt, c'est moi!] took an ordinary article of life, placed it so that its useful significance disappeared under the new title and point of view – created a new thought for that object". It is not recorded whether they surmised - heed now Mr. Levy's warning - that he was taking the piss (a gag as old as the piece itself but which, like a well patronised urinal, sees repeated exposure). In his defence Marcel/Mutt adopted a rigorously anti-retinal position, and refused to have anything to do with the aesthetically motivated point, offered by others trying to be helpful, that his convenience looked like a seated Buddha.

Not a 4th century urinal
By rejecting such an insensitive comparison Duchamp would have been making a minor, and unsung, contribution to harmony in New York's community relations, though his further jibe that "the only…art that America has given are her plumbing and her bridges" may have undone his good work and provoked a spasm of Francophobia some 90 years before the neo-con apoplexy of, for Pete's sake, the "Freedom Fries" episode.

Now for a bit of chess: Duchamp learnt the game at thirteen or so. He played with his brothers whom we saw, on April 1st, engrossed in their game. They were perhaps inadvisedly leaving their demoiselles alone with their thoughts turning by degrees from ennui to Lysistratian revenge. From there on, chess, art, life and les femmes were interwoven inextricably for Duchamp. He married his first wife in 1927. According to Man Ray she rapidly realised his preference for the seductive diversions of Caissa and one night glued his set to the board. Fellow chess players will understand if, through the fog of his obsession, he thought she was merely, and wittily, emphasising the perils of neglected development: a reminder not to allow our pieces to be stuck on the first rank. Alas, that would have been a tragic misevaluation of the position. The flag fell on the marriage three months later.

The career of Duchamp, including his alleged resignation from art so he could play more chess, his alleged renunciation of OTB for correspondence chess (CC is alleged to be "non-retinal", you see), his alleged debt to hypermodernism in his strategic style, his alleged preference for combinative complexity, the alleged influence of chess on his art and vice allegedly versa, have all been analysed in exhausting depth (see some references at note 3). But, as ever and in all things he was a bit of a tease, including in his endgame problem christened by Beliavsky and Mikhalchishin (1995) the Riddle of Duchamp. Below is the position he set in 1943 with a cupid and arrow pointing to the b file (oh that today's chess press would adopt such endearing devices) and the stipulation that it is a win for white. B&M however give analysis to demonstrate that it is a draw, allegedly. 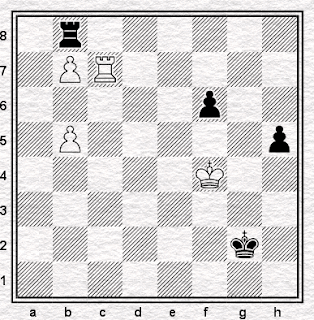 One entertaining and, to this endgame rabbit, instructive line after 1.Ke4 finishes with lone white king and queen somewhere up top left, and a black pawn on f2, with its king in close proximity, down bottom right. Every other man and his chess playing dog, bar moi-même, knows that this retinal white win is in fact a draw (see note 4).

And so to one last Duchamp-related conundrum: Ray Keene (2007) wrote that "Aron Nimzowitsch...preached the doctrine that a move is less beautiful than the thought behind it – a view clearly echoed in Duchamp's own artistic production". It's the anti-retinal again, and with Keene's rather imprecise formulation as a fig leaf I'll continue to think beautiful thoughts while I play blindingly obvious blunders. But not if Levitt and Friedgood (2008) (note 5) have their way, for they pray in aid Tarrasch, with quote-marks but no source, as follows: "The beauty of a move lies in the thought behind it". Spoilsports; so my moves have to be decent in the first place for the thoughts-beautiful to count. But help, dear reader. Who first penned the epigram with that thought-provoking-thought attached, was it the Good Doctor or Systems Man? Chapter and verse, please.

There is so much to Duchamp. The above is not the half of it. Personally I'm dead chuffed that one of most iconclastic artists of the 20th century was also a committed chess player.

1. This Postscript's topographical reference is to the much maligned neighbourhood of South London called "the Elephant and Castle" three or four miles north of Streatham and Brixton. Locally anyone will tell you it is a corruption of "Infanta de Castile" whether it is or not.

2. The My Fair Ladies postscript referred to the game that Koltanowsky lost to Duchamp in 15 moves. You'll find it here.

This article by Ian Randall deals in depth with the relationship between Duchamp's art and chess, and discusses Keene et al.

This is a link to a forthcoming book (May 2009) by Naumann and others, Marcel Duchamp: the Art of Chess that will include games of Duchamp analysed by Jennifer Shahade, which looks like a cracker.

See Francis Naumann's 2008 article A Problem With no Solution for the full story.

5. Julius Bryant (ed), The tomorrow of my yesterday; the complete works of Barry Martin. Veenman, 2007. Chapter 8: Raymond Keene, "The Artist as Chess Player". Barry Martin is our very own chess-savvy contemporary artist of note.

Just found a nice Duchamp quote: "I am still a victim of chess. It has all the beauty of art - and much more. It cannot be commercialized, Chess is much purer than art in its social position."

I've seen other 'Indian chess pieces' similar to the one in that first photo. They are always elephants, are always called Rooks, and are never pictured with a matching piece from the same set. How do we know that it's not what it appears to be - a small statue of an elephant? If an artist paints a young girl holding a daisy and calls it 'old man in a hat', is the picture a girl with a flower or a man wearing a hat?

Chess might have started life as an artist's rendering of a battleground. Then a couple of children started to play with the elephants, the ferzes (whatever they were), and the viziers (ditto). Then they started to make new rules, as children young and old, big and small, often do when they are losing. Since the object was to win the King, an inevitable rule change was that the King could never be captured. That is the real art. - QED, Mark

For some more chess art, my brother just sent me to http://artinconnu.blogspot.com/search/label/Chess.