Half a Club Championship Report

First off today, here are the scores on the doors at the halfway stage of the 2009 S&BCC Championship.

Many thanks to Angus for running the event. I'm sure he'd be doing even better than 3rd equal if he wasn't burdened with the arbiter responsibilities.

The second half next Tuesday looks promises to be an interesting evening. With the top three rated players - Robin, Alan and our own T.C. - still to face each other it's all to play for.

For now though, here's a puzzle to finish up the week. An Ordinary Chessplayer spotted that my flashy finish from Wednesday came from a Dutch Defence. Today I offer you another one. 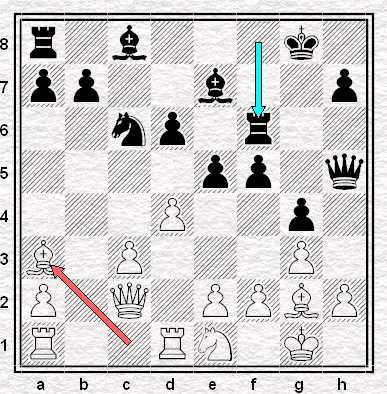 My opponent had just played 1. Ba3, with the intention, I thought, of taking on c6 then taking on e5 - and thus winning the pawn since d6 is pinned against the bishop on e7.

After a fairly lengthy ponder I decided to fall into his trap with 1. ... Rf6 and the game continued 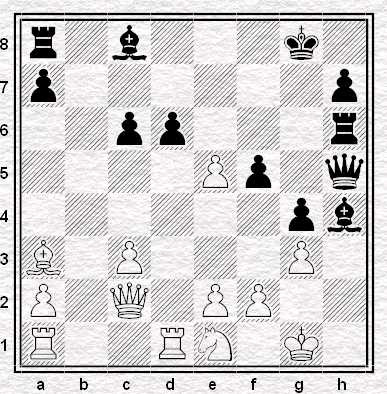 It's not too difficult to see that after 5. gxh4 Qxh4 White is getting mated - which is how the game finished - but I was pleased to spot the bishop sac in advance. In particular I was chuffed to forsee from the beginning of the combination that if White had tried to throw a spanner in the works with 5. Rxd6 I would have been able to respond with the amusing 5. ... Bf6. Again it's not so hard to see that from the second diagram but for me it's quite an achievement to work it out from the first one.

To be fair 2. Bxc6 was always going to be a risky move. Giving up the fianchettoed bishop just to win a pawn is asking for trouble. Had White not played that, however, I'd thought I could go ... Rh6 anyway with a similar attack to the game - albeit one that White would probably be better placed to defend against because of the extra defensive piece.

I travelled home feeling smug but unfortunately Fritz put an end to that. It turns out there was a huge flaw in all of this and we'd both missed a chance for White to secure a solid advantage. I'm sure you, the esteemed readership of the S&BC Blog, will be able to do better.

The reason James and Mohsin have asterisks after their names is that I was unsure of the result of the game between the two players. I now know that James won so he has two points.

There's a much more fundamental problem - from move 1.

(which I hadn't seen at the time).

I do have a vague memory of considering h2-h4 during the game but that wasn't what I had in mind this time ...

The line that seems to be good for White (there are possibly others) is ...

which is possible because of the Qb3+ resource.