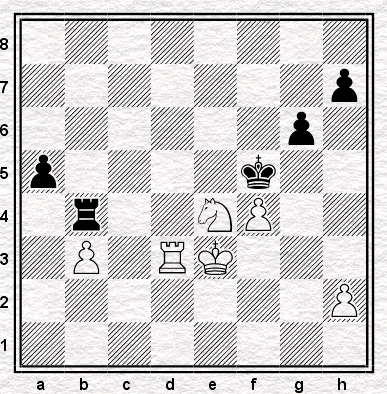 Before we get on to the diagram above, from a game in the tenth and penultimate round of the Benasque Open, I'd like to tell you about the top board game in the ninth round (a game readers of Chess Today will already have seen me describe.) The players were the experienced Romanian grandmaster Mihail Marin and the rather younger French grandmaster Romain Edouard. I played a longish game myself in that round - my last three games went to 49, 77 and 70 moves respectively, though all would have been half the length had I seen the wins available - and so I was somewhat surprised to see play still continuing on the top board when I finished my post-mortem. I was more surprised, though, by what was still to come.

When I arrived among the spectators, almost four hours into the session, the game had, I believe, reached the following position, Black having played 56...g5 and hence elected to keep his last pawn and the winning chances that went with it. 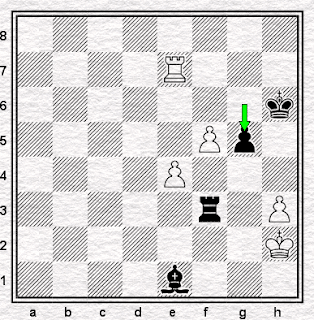 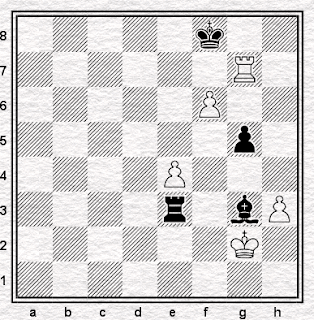 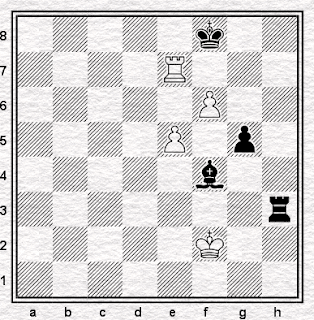 Position after White's 65th. Does Black have a win?

This should, however, have been anything but fatal: though obviously the chance of winning was long gone, it should be absolutely elementary to hold bishop and pawn against rook, provided that the pawn can be reached and defended. Which after 75...Kf6 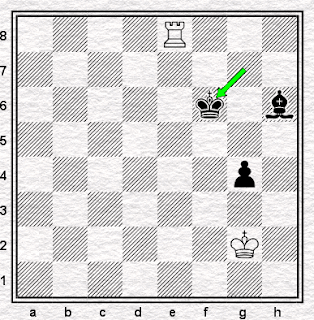 it obviously can be.

(At this point I might add that there was a huge crowd around the board, although I don't suppose the players were aware of it. I stepped back a bit to allow the shortish Finnish FIDE Master Markku Hartikainen to see, only for his view shortly to be blocked by some other chap barging to the front. A tap on the back produced no response more positive than a shake of the head, something I might have understood had I known that the gentleman was an arbiter, which in turn is something I might have understood had he bothered to wear his badge. Benasque has a couple of genuinely objectionable individuals among its arbiters: this guy is one of them.)

Play proceeded - although the game was of course completely drawn Marin had no reason to accept this until he felt like it - and Edouard succeeded in moving the pawn to a Black square, which should really have clinched it. However, and - in any sense beyond the psychological - inexplicably, in this position Edouard put his king on f4.

It was his eightieth move and I reckon he might be eighty before he plays another move as bad as that. I can only imagine that he was suffering the delusion that rather than blocking the defence of the g3 pawn, he thought he was reinforcing it: perhaps similar to the apparent belief of an exhausted Efim Geller in this game 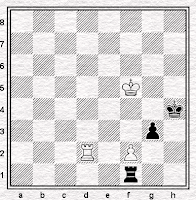 that he would be able to take the g3 pawn and thus uncover an attack, by his king on f5, on Fischer's f1 rook.

....the Black King should head for the opposite corner (i.e. one of the opposite colour to the bishop, so that in the event of, say, WK a6 BK a8 and BB b8, rook to the eighth rank produces stalemate - ejh) as fast as his legs will carry him, and once arrived there nothing can happen to him.

In principle, perhaps, this may be true, but in practice bad things can and do happen. There are still tricks and in the particular practice of this game - given what had already happened and the consequent state of his head - Edouard, though he did indeed head for that corner, was always likely to fall for one of them. White can, for instance, annoy and unsettle Black by refusing to let him settle in the corner square: after Black's 97...Be5 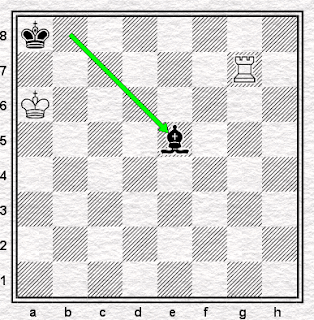 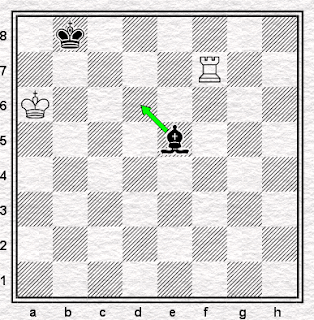 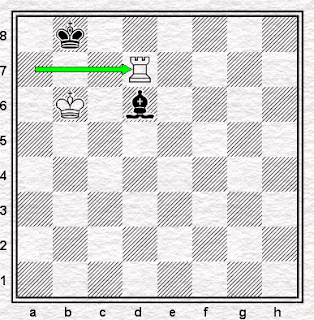 After he resigned, he got straight up, scribbled his name on both scoresheets as fast as he could, grabbed his carbon copy, clutched it into a ball and started to run out of the hall, obviously in a state of some distress. Halfway down the aisle he tried to drop-kick the ball of paper, missed and then stopped, putting his head on a nearby table as if to start beating his forehead against the surface.

By coincidence my wife had picked precisely that moment to come into the hall and therefore had the best view of anybody: she told me later that her impression had been of a young player behaving petulantly. But I don't think it was, not at all. It was an individual in a state of distress, somebody who in a situation of high mental tension had inflicted a torment on himself, somebody starting to run because he wanted to and then stopping because he didn't want to, somebody who - from his face - didn't know whether to cry or whether to scream and who therefore did neither. It was somebody who really didn't know what to do. And I really felt for him.

Anyway, having had a poor start to the tournament and a couple of small disasters on my own account, I had trudged my way up to +2 and the next day I played my game a little closer to M. Edouard. (Indeed much closer, since the previous day I had played on the blind/partially-sighted tables, down the very far end of the hall.) I was on board 45 (of 208) against the Peruvian FIDE Master Iván Hernández, rated 2326, more than a hundred and sixty points above me. And I played him off the park.

It was also, for nearly four hours, one of the most exciting games I have ever taken part in. I turned down a draw offer after twenty moves, not just because I knew he would not have offered it were he not worse, but because I knew he was worse. I missed some probable wins but didn't lose control of the position until move thirty-five: and even then I got it straight back, saw some tactics that he did not and, as Marin had done the day before, picked up a rook in exchange for an advanced pawn.

But in reality it was Edouard's role I was playing, not least, but not only, because I also picked up a bishop - and entered the endgame with a piece up. In this instance, for absolutely nothing. A piece up for nothing against a FIDE Master, graded 2326.

In retrospect - or possibly not even in retrospect, because despite having played fearlesly I could sense my fears beginning to make themselves felt - I probably panicked, partly through relative time shortage, partly through not seeing clearly how I could make my extra piece count and being aware that the pawns were starting to be exchanged. Having probably saved me earlier on, the Fischer clock now began to work against me: with just a small increment every move rather than a large addition at a time control, there was no real opportunity to clear my head and think about how to sensibly win the game. (I suspect that had there been such a time control, Hernández would have resigned.)

In truth - one kind of truth, anyway - everything was, in fact, a great deal more under control than I knew, and after Black's fiftieth move we came to the following position 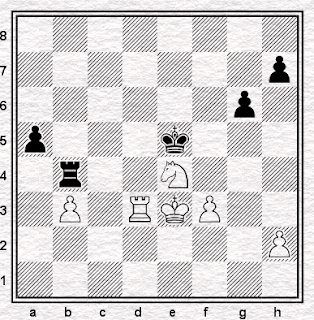 where my 51.f4+ was a perfectly good move. It did, however, have the demerit of taking away the support for the knight.

As inexplicable as Edouard's blunder of the g3 pawn? I can't really explain it, because the moment you look at the position at the top of the column there is no question. You see immediately what the problem is. You cannot miss it.

Maybe, as Tom has suggested to me in a discussion of the game, because I had just attacked the king I forgot that it, too, is an attacking piece. Maybe, because my king defends the knight it didn't seem undefended, just as, because Edouard's king "defended" his pawn, he maybe failed to appreciate that in fact he had rendered it undefended. Maybe I was just thinking about his plans to attack my pawns and it never occurred to me that I might have an endangered knight. But most likely, I didn't notice the threat because I had created it myself.

But really, I could have cried.

[Note: this is the first of four postings this week on the Benasque tournament.]
Posted by ejh at 9:55 am

"I'll go with the momentum".

I wonder if the overall flow of the game is something we (chess players in general) should think about more. Perhaps even as much as the objective assessment of the position?

So nobody fancies showing me Edouard's win then?

The "momentum" comment is in Rowson, I believe. The game in Tigers is Miles winning a dead drawn game - whether more drawn or not than Marin-Edouard is perhaps a matter of taste.

I remember a debate on some forum a few years ago about whether a player should be able to claim a draw with K+N vs K+R. (an elementary draw IMO which i believe I could teach someone with no knowledge of chess to hold vs the World Champion). A leading arbiter took the contrary view, yet expressed the belief that K+B vs K+R should produce a successful draw claim on the former's behalf. I think games like this confirm my opinion.

I'll have a go at the Edouard win, but I'll say it's no surprise he missed it because it is not at all obvious. A great many players would need more than the five minutes that he had to spot it.

Yep, that's the size of it. Would it be impolite to ask whether that was a computer-assisted answer? (It certainly was for me.)

Hmm, I wonder if R v N is really as easy an ending as you make out. I can claim to have beaten somebody quite strong with the R - in a "theoretically drawn" position to boot.

And is it easier to draw than R v B?? Dunno about that either - the fact that drawn positions in R&P v B (whilst not that common) are *much* more frequent than with R&P v N might be an argument against, IMO........