It was over almost before it began but it was no less mysterious for that. Two weeks on from the Nisipeanu-Kamsky encounter at Bazna I'm still rather confused and unable to answer that most basic of questions: "Why?".

It's not one of life’s great curiosities perhaps - not up there, for example, with the Jacko bullshitfest in the media these past days [ listen carefully and you can hear kiddie fiddlers from Gary Glitter to Brian Eley giving up a collective “What the fuck? Who’s handling his PR?” ] - but it's most definitely a little slice of strange that has me wondering ...

In case you blinked and missed it, the game went 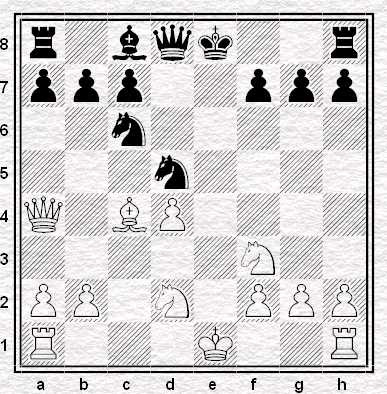 Ordinarily that would be that, just like Miles-Korchnoi, Johannesburg 1979 or Short-Karpov, Skelleftea a decade later for example, but in our game it was only after

that the combatants agreed to a draw. The lack of a sixteenth move from Black would indicate that Kamsky, perhaps weighing up the respective merits of making a point and pissing away an entire afternoon shuffling his knight back and forth, was the one to get bored and call a halt to the proceedings.

So it seems Nisipeanu wasn’t the least bit in the mood that day and yet for some reason didn’t want to be the one to claim the draw.

I had initially thought that he might simply have been a little ashamed of such a blatant absence of fighting spirit but on reflection the embarrassment hypothesis seems rather difficult to sustain - Nispy's barnet*, after all, is rather indicative of a man who's developed a strong resistance to indignity.

Was it maybe something to do with Bazna, as seems to be the fashion these days, having rules in place intended to prevent short draws? Again it would appear not. Chess Vibes' report makes clear that the traditional three-fold repetition of position was one of the exceptions that would permit a draw to be declared before move thirty.

The extra moves seem completely unnecessary to my eyes. If our Romanian was in a peaceful mood why not end the game straight away? Why leave the impeccably cropped Kamsky to do the dirty work?

I confess I'm at a loss. Any offers? 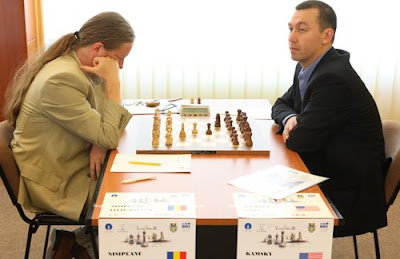 "... and when they've finished they
ask you if you want something for the weekend ...."

Post Script 1:
Halfway through writing today's a van der Wiel-Karpov game from the GMA World Cup series 20 years ago popped into my head ...

... and now I want to know what's the record for repetitions of position without a draw being claimed.


* This may be a sign of age but I look at him and I find myself pining for the return of national service.

Had to look this up!

Romania abandoned military service in 2006. Bearing in mind Nisipeanu was born in 1976, I presume he's already done it.

I yearn for military service here Paul. Romanians can do what they will.

Still, I'm impressed by the depth of your research!

Meanwhile, any thoughts as to why he repeated moves five times?

Dunno, but Nisipeanu is a really interesting player ---- has resurrected lots of 'wrong' openings like the Blumenfeld.

Has he tried the Berlin?