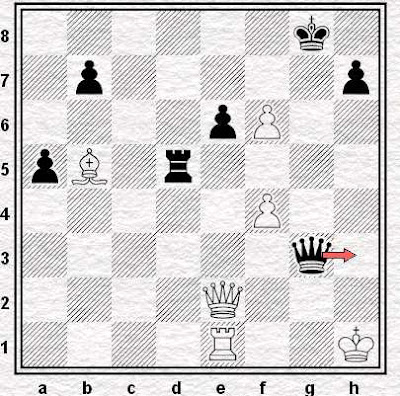 This was the position that I reached after 36 moves and three hours of play in my game at Albany Chess Club last week. I sealed 37. … Qh3+, but, the post we’d published that very morning notwithstanding, the game was agreed drawn without any further play. Sure, the point of last Monday’s blog was to encourage myself to try harder to win games, but there are limits, aren’t there?

All the lines seemed to me to end in perpetual check and I wasn’t convinced that it was worth dragging somebody to Golden Lane to find out whether his aversion to draws was strong enough that he’d voluntarily enter a clearly lost rook and pawn ending just to keep the game going. Similarly, my opponent evidently didn’t think it was worth another trip into town just to discover my sealed move and establish for sure that I had noticed that … Rh5 was not mate.

So, a draw it was - which was all very well but it did leave me with a dilemma. Does my sealed move actually count as being played?

My queen check fell in the forest but my opponent wasn’t there to hear it. Did it make a sound? Would the answer to this question be different if I’d sealed a blunder and decided to resign? What if the position was lost for Black and he chose to throw in the towel between sessions?

If anybody fancies helping me out of a philosophical quandary, they are welcome to make a contribution in the comments box.


PS:
Readers of Chess magazine may be under the false impression that the S&BC Blog spends most of its time sunning itself on the Costa del Sol. If so, they may wish to know that this post was written in a cafe on Streatham High Road.

Seems a little harsh on the sealed move but I suppose it makes sense.

As it happens I am in Cartagena this week, which is the closest I've ever been to the Costa del Sol...