Every Picture Tells A Story: And Then There Were Three.

Blog 4 in a series of collaborative posts: this one by Richard Tillett, with comment by Martin Smith.

Patient readers who have persevered this far into our saga will know that Martin and I are in thrall to an obsession. The object of our attentions is an early 19th century picture of the gentlemen of the Hereford Chess Society. We want to find out as much as we can about it, the little-known artist (Thomas Leeming) who painted it, and the people he depicted.

Our previous blogs can be accessed here. In our last one, we explained how we discovered that there are actually two, intriguingly different, versions of this picture. One is in store at the Hereford Art Gallery. The other, formerly owned by Ian Greenlees and subsequently sold at Sotheby’s, stubbornly resists all our attempts to locate its whereabouts. Since that blog appeared we have sourced a high quality image of this version on a German art website, Kunst für Alle, which probably came from Sotheby’s at the time of the 1991 sale. Here it is: 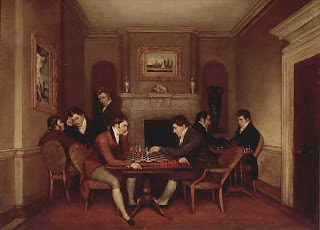 You can buy a reproduction to hang on your wall.
Go on, treat yourself. It’s available here.


It’s August and I’m browsing through a Christie’s sale catalogue for an auction to be held at their South Kensington showrooms the following month. I drool over some period chess sets, then scan through the paintings. One of them catches my eye. There are some gents playing chess. Hello, they look familiar. Surely it couldn’t be those gents again. It is. 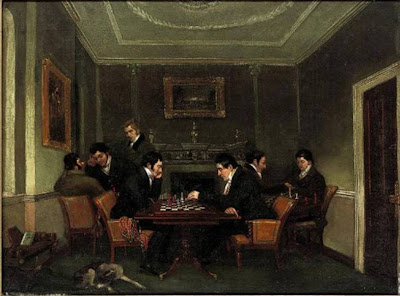 I pick myself up off the floor and take a closer look. There are some notable differences. The dog is larger and sleepier than the poodle in the Hereford version, (which you can see here) and it has wandered over to the other side of the picture. Although there is still a pile of clutter in the left foreground this time it includes a book (it turns out to be a chess book) resting on a rather stylish stool. All change with the chairs too – these are fancy, expensive ones upholstered in what looks like leather and in the Empire style. They would have been the height of fashion in 1815 and doubtless would have been much admired in polite Hereford society.


The room setting is different too – the early Georgian fittings and decoration in the other two versions have given way to a later 18th century style, with lighter mouldings around the door, an ornamental lockplate at the extreme right of the picture, and neo-classical plasterwork on the ceiling. There’s also a new position on the board and some different paintings on the walls. However, the figures themselves are much the same, and that looks like Beavan in the left foreground (as in ‘Hereford’) rather than Buckson (as in ‘Greenlees’ at the top of this post).


Martin and I confer. We wonder how many times Leeming turned this out. Perhaps it was his ‘nice little earner’, with different versions coming off the production line for any of the gents who fancied one, customised to include the client’s pooch, some personal possessions, and even interior furnishings.


‘I may have to buy it,’ I declare. But how much should I pay? The estimate is £800-£1200, well below the £7200 the Greenlees version made in 1991. The auctioneers do not know the background to the picture (the catalogue describes it merely as ‘English School, 19th Century, the chess players’), but that alone does not explain the low estimate. 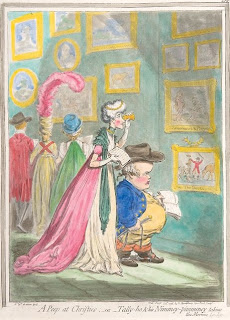 The reason becomes apparent at the viewing. Parts of the picture are poorly painted. The hand that hovers over the board is a bit iffy, as is some of the perspective. The artist’s attempts to take out the niches on the back wall have not been entirely successful, and the top right hand edge to the fireplace looks wonky. Leeming was a better painter than this – surely it is wholly or partly by another hand.

We discuss the picture with one of Christie’s specialists, the extremely helpful Gus. He takes us into a darkroom where we examine it under ultraviolet light. This shows up areas where the picture has been restored. He tells us that it was sold once before in 1982, also at Christie’s, when it made £750.

The day of the auction comes. Egged on by Martin, I decide to attend in person. There are about 30 bidders and half a dozen or so Christie’s people taking phone and internet bids. Lot 572 comes up and bidding opens at the top of the estimated range (£1200), so there must have been some absentee bids. 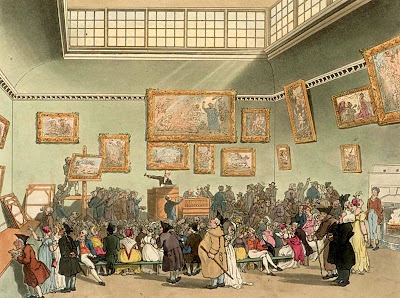 
I stick my hand up at £1300. For a moment there are no other bidders but then a competitor enters the fray via the internet. We battle it out to £1700, which is £100 over my limit. Mrs T will surely have something to say if I go any higher. So, despite the auctioneer’s best efforts to tease another bid from me, I decide to let it go. Sold to the internet bidder for £1800, which is £2250 when you add in the buyer’s premium. I tell Martin that I shall grieve, but not for too long.


We will have more to say in a future blog about how we think this version relates to the other two, and who knows, maybe by then a fourth version will have surfaced. In our next instalment (February 5th), Streatham and Brixton Chess Club’s Institute for Thomas Leeming Studies goes on a field trip to Hereford.

Acknowledgements:
Kunst für Alle (Art for all).
Christie's Interior sale catalogue No. 5986, 7 September 2010.
Goldmark Gallery for the Gillray.Wikimedia for the Rowlandson.
Every Picture Tells A Story Index
Chess in Art Index

Bad luck on not getting the painting Richard. Sounds like bidding at an auction was fun though.

So, is Leeming banging out multiple versions of this painting the same thing as JK Rowling milking the cash cow by writing the same Harry Potter book seven times over?

Bidding at auction is naked adrenaline and absurdly exciting. Not sure 'fun' is quite the right word though; 'scary' perhaps, because it's real money and so easy to spend more than you intended.

Leeming clearly had some success with this painting and its various versions, but unlike JKR commercial success seems to have eluded him. Martin and I will have more to say about his life and career in a future blog.