Surely the vast majority of chess games are, essentially, decided in ordinary positions: nothing special is going on, but one player blunders, or the other one misses the best plan, or someone takes too long to work out what they should know, and it comes back to haunt them at the time-control. Yet how often do we test ourselves at home in these kinds of positions? See them featured newspaper columns? Find them collected in puzzle books? 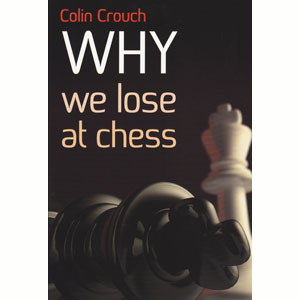 Never? Well, I can now name one exception: International Master Colin Crouch's Why we lose at chess, published last year and under review here today.

Before treating the book as a practical tool, I should point out that the book was not primarily intended as an alternative puzzle book. Instead it stems from private analysis Crouch performed on his worst blunders from 2006/7, in an attempt to recover some of his previous form after suffering a stroke, with resultant partial-blindness, in 2004. Crouch discusses the effects of his stroke on his play and his life, adding a sometimes-moving, often-insightful and certainly rare personal dimension to the work.
But despite this unusual genesis, the book has a potential to be a great practical tool for adult club players looking to improve. In total the book features 60 test positions, subdivided into 15 sections of four positions each. In each of the positions Crouch blundered, so the book has the remarkable property that you only to find a decent move in one of the positions featured and you will have outperformed an International Master overall. Each of the positions is 'remarkably unremarkable' - and thus they are perfect for simulating over the board chess at home, one particular way I believe that adult club players stuck in a rating rut can use to improve their chess. After each section Crouch provides extensive analysis; the reader can delve in deeply to stretch further their analytical skills, or merely see whether their decision was correct.
The positions are loosely organized in two useful ways. Firstly, several games feature more than once, which thus form thematic threads throughout the book. The reader can use this to help diagnose their own strengths and weaknesses; I found myself committing virtually the same blunders as Crouch in the King's Indian more than anywhere else. Secondly, the positions progress throughout the book from opening to endgame; this thematic bunching can again be helpful diagnostically. In my case, for instance, I blundered especially easily in the tense positions where queen exchanges were available.
As a practical resource, the above two paragraphs highlight the books strengths. But there are weaknesses. Firstly, whilst the positions are loosely organized in the ways I give, this is not spelled out, clarified, or consolidated. Perhaps it is a pity that a co-author or assertive editor didn't tease out such things more rigorously, although this might have depersonalized the work somewhat. Secondly, underneath each position three suggestions are made for the reader to analyze - two moves, while the third suggestion is always 'something else'. This is tied to a woolly discussion in the introduction concerning practical decision making, but is surely too unrealistic to be useful. (I covered up these suggestions when testing myself against the positions in the book.) But as weaknesses go these are far from fatal.
What else? Firstly, the book is topped-and-tailed with an introduction and conclusion about eliminating blunders and with general advice for the reader. This is mostly interesting, and sometimes touching, as when Crouch dedicates his work to those who keep chess clubs going - but in places really quite rambling and not wholly convincing. Those interested in practical benefit only should skip these passages and stick firmly to testing themselves against the positions. Secondly, no chess book review is complete without pointing out how unrealistic the title is; an accurate title for this work would have been "My worst blunders analyzed". The book is not focused on 'we', nor interested in classifying the different ways in which chess games are lost. Thirdly, the book could have done with tighter editing: the rambling can be forgiven in terms of personal insight into the author, but the tense sometimes slips, and the odd typo has been retained. Fourthly, the book might well be of particular interest to London-based players - many of Crouch's opponents are well-known players here.

My conclusion: if you are an adult club player, stuck in a rating rut but willing to work to improve, the positions in this book provide good material to simulate over-the-board chess with. The rest of the book is an interesting read, particularly for the personal insight it gives into Crouch's return to chess after his stroke; however, there are serious weaknesses with the quality of writing and advice on offer, problems that an aggressive editor might have rectified. Finally, I hope the book is a success and that collections of such ordinary positions will become more common.
Posted by Tom Chivers at 10:01 am

I have thought for a long time that my performance (and grade) varies according to how often I play bad moves rather than the frequency I make good ones.

Perhaps I should get this book and work through it. Or, probably I should first go through my own games and take a closer look at where I go wrong. I'm sure that there'll be patterns.

If you have the time, do both. 'Constant analytical work' is the catch-all phrase for chess improvement - but varying the type of work is sensible for more than one reason. (One thing might be more effective than other, variety helps to keep freshness, etc.)

I'm sure both is the right way forward really. I'm also suspicious that 'buying a book' is not the prelude to 'constant analytical work', but is what happens before a book sits unstudied on my shelf.

I'm reviewing this for another chess publication, so I din't want to say too much here: but I thought it a really poor, messy book, with a potentially much better book hanging around somewhere inside it.