The Worst Move On The Board XI 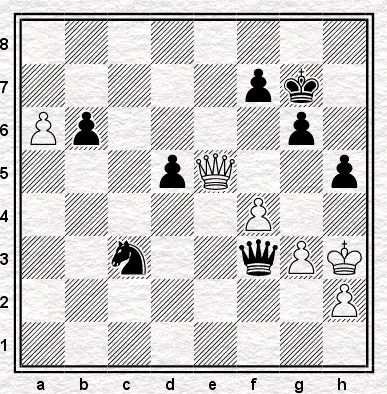 Georgieva-Lada, Gibraltar 2011, round one. Position after 48.Qb8-e5+, kindly forwarded to us by Jack Rudd.

A panic job, this one: if we go back a move, to the position after White's 47th, we can maybe see what went wrong. 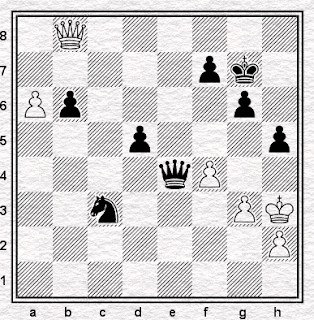 Black is obviously not only winning, but close to mating. But she has two causes for concern - the possibility of White's a-pawn promoting, and the potential for White to save the day with a perpetual check. As it happens, there's nothing much to worry about: simply 47...Qe6+ 48.Kg2 Qe2+ followed by ...Ne4 will get White mated before she has any time to do any damage, since if Qe5+ then ...Kh7 and White has no time to get closer to the king.

Unfortunately, Black blundered with 47...Qf3?? which crucially not only loses a tempo (since White can move a piece other than the king) but allows White's queen into e5 before Black is ready to deliver mate. Hence 48.Qe5+ and now it's panic-stations: 49.a7 is coming and Black doesn't even have a perpetual check with the queen (the king can hide on h4).

No one's chimed in yet, perhaps considering it too obvious, but I assume Black played ...Kh6!!

I'm afraid she did. Her opponent did not miss the strong reply.