Sometimes it's the smallest details that most grab your attention. A casual remark, intended almost as an aside but which, with the benefit of hindsight, really stands out.

Yesterday, for example we (re)published Keene's Gambit, the Sunday Times piece on what became known as the 'Keene-Miles Affair' that stirred-up so much poop at the beginning of the 1990s.  Of all the 4,700 words in Nick Pitt's article it was these 24 that I enjoyed the most:-

[Miles] contacted Brian Eley, a discontented former Federation officer, who after a few inquiries made a complaint about how the inter-zonal fund had been spent.

Yes, the initial complaint to the BCF really was made by notorious kiddie-fiddler Brian Eley. The guy apparently felt that a few hundred quid's worth of alleged fraud is really not on, but that doing a runner while the police are investigating you for child abuse is completely fine. Eley had himself quite a moral code, don't you think?

Omar Little:
"A man should have a code"

Anyhoo, what of Keene? It was twenty years ago, so why bring this all up again now? Well, I tend to believe that old stories are interesting precisely because they happened a long time ago (see Times chess man cracks 'missing woman' riddle for another example), but aside from that, it seems to me that the fall out from the Keene-Miles business still has some relevance for chess today.

For a start, the picture that the Sunday Times paints of the (then) British Chess Federation, is not a happy one.

Despite the strength of British chess the Federation is now riven with discontent and faction-fighting. Rumours and allegations of maladministration and financial mismanagement, of which the Miles-Keene affair is merely the most colourful, are prevalent.

If true, might the deterioration of England's chess fortunes to our current position as one of the chess world's also-rans derive, at least in part, to the BCF's inability to handle itself effectively back then? British chess was "booming" when Keene's Gambit was published.  We can hardly say the same now.

Then there's last summer's Staunton Memorial dinner and CJ de Mooi's somewhat muddled insistence that the event had nothing whatsoever to do with the ECF. Why, I wondered at the time, would it be a problem if there was some kind of official connection anyway? Might the events that the Sunday Times described (or claimed, at least) have something to do with it?

Keene, of course, denied Miles' allegations, but even if we imagine for a moment that he had done exactly what he was accused of, after two decades should it be controversial for the ECF and RDK to work together? It might not have been if the issue was satisfactorily resolved at the time.

Keene wrote through his solicitors to the British Chess Federation informing them that he could not attend the inquiry on the appointed date because his wife’s grandmother had died; that he would not agree to attend on any future date; that he would sue anyone who repeated the allegations made by Miles; and that he hereby resigned from the BCF.

I suppose that whenever somebody leaves an organisation under a cloud of allegations not fully investigated, however much water subsequently passes under the bridge, resuming a working relationship will inevitably create an issue or two for those involved - perhaps on both sides. At some point, though, shouldn't we allow people to be rehabilitated? 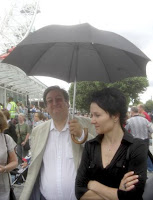 Aside from Keene, though, aside from CJ and the ECF, aside, even, from Brian 'Evil Uncle Ernie' Eley's bizarre cameo, if there's one reason why you might want to take another look at the Sunday Times' piece it's Tony Miles' story. It's easy to overlook given the article's title, but the sensitive portrayal of Miles's deteriorating mental state, and his subsequent recovery, remains as deserving of attention twenty years on as it was on the day of publication.

For all these reasons, then, I hope that some folk amongst our readership will consider Keene's Gambit to be worth a look. It is there, at least, for those that want to read it. For those who only want to see some chess, here's the first ever R.D. Keene v A.J. Miles encounter. The first of nine, as it turned out, with Raymondo finishing up slightly ahead with +3 =4 -2.


Not the brutal demolition of Keene-Miles, Hastings 75/76, to be sure (see here for the final combination), but still quietly pleasing for those of us who like this sort of thing. Raymondo's notes to this battle, by the way, can be found on chessgames.com.

Thank you very much, for me as a German born in 1976, the story was entirely new. In short time I have become a great fan of the "Ray Keene Index". This man is really a phenomenon!
Keep up the good work!

I think two things happened in between the Tunis Interzonal and the Sunday Times piece which had a far greater effect on chess than anything which the BCF could have done to the contrary.

The first was the fall of the Soviet Union, which took away the major reason for the public's interest in a game which they didn't understand, and hence the much of interest of would-be sponsors in promoting it.

The second was the Big Bang, and the consequent (and rapid) expansion both of the personnel of financial institutions in the City of London, and of their remuneration. One result of this, almost contemporaneous with the ST story, was the recruitment by Bankers Trust of a number of prominent figures in chess including David Norwood: later of course the only plausible English candidate for world-class status since the turn of the millennium was recruited by Goldman Sachs.

One the one hand, a great deal less money was coming into chess - on the other, the sort of person who might have considered becoming a chess professional in the Late Seventies or early Eighties was often in a position to make a great deal of money very quickly by doing something else.

There are many things the BCF could have done much better than they did, no doubt about it. But I don't believe they could have done anything that would have led to Luke McShane turning down Goldman Sachs.

Re: Ray, if all he had ever been involved with was the Tunis caper, I'd be very much in favour of writing it all off in every sense. I mean I'm damned if I'd like everything stupid I did in the mid-Eighties to be brought up and used against me all the time. But as we know, that particular scam was just one stopping-point on a long journey of questionable activity.