You go down the Club after Christmas to get back into chess-shape at the mid-season Rapidplay, you get through the door, and some wag takes the proverbial about an injudicious Comment you posted on the 11th of ejh's Twelve Puzzles of Christmas.

"You wouldn't recognise a stalemate if it shook your hand and wished you Happy New Year," he seasonally quips and, warming to his theme, adds "As for that puzzle number nine; if I've got a rook and king against a king why should I care if there's a mate in only nine? A few more wouldn't worry me". But the bar was open, and he may have been talking about pints.

I didn’t know either, but the book by Jonathan Levitt and David Friedgood “Secrets of Spectacular Chess” published in a second edition in 2008 (henceforth SOSC), makes a seductive attempt to entice you into this wonderful world of problems, studies and the like. Their USP is to reveal the irreducible elements of beauty in chess. Problems and studies are the specimens in their laboratory, to be dissected and dismembered, poked and probed, to expose its essential qualities. 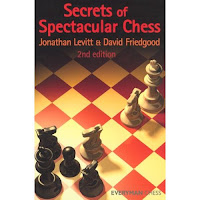 To me it makes a strong bid for the Misleading Book Title of the Year award, 2008. Chess-beautiful isn’t the same as chess-spectacular; and the authors aren’t disclosing their inner-mosts so much as calling the well-knowns to order. It’s categorisation not confession. But that’s publishers for you. Nonetheless, the book was favourably reviewed in the chess press, and rightly so.

Levitt and Friedgood's (L & F for short) scholarship - they are both titled players, and expert problemists - is impressive, and what will be of special interest to practical players is that, along with puzzles etc, they illustrate and apply their conclusions to OTB games.

To get down to business, and set out their stall , the core of their analysis is that there are four “elements” of chess beauty: Paradox, Depth, Geometry and Flow.

Paradox is the shocking “that-can’t-be-possible” quality. Of the four elements it is perhaps the one with which we are most familiar in “real” chess. It is the stunning blow that unleashes the winning combination. Kotov’s Queen for Pawn sac against Averbakh in the 1953 Candidates for example (which L & F analyse at length). 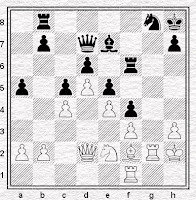 We’ve all got our favourites, and they’ve been collected into books: “The 110 Most Amazing Moves of All Time” and so on. But caution: for L & F beauty is not “That’ll blow him away!" but “You can’t be serious!”. “Something which is apparently absurd but is or may really be true” - as my dictionary puts it, to John McEnroe's chagrin.

Broadening things with examples of puzzles and studies L & F illustrate the aesthetic delights of paradoxical underpromotion, “winning with limited material”, “breaking the rules” (in one end-game study, the under-dog voluntarily, and for no apparent reason, blocks his own pawn on the 7th with his king), and the dark arts of Zugzwang (see book cover). There is chess beauty in them all.

"Depth" they also use in a special sense, something like “not clear why until later”. It isn’t simply the long combination, as practical players would think, but a move whose point isn’t obvious until others, may be many more, have been played. It is not a trap laid for the unwary opponent, so much as a positive "self-serving" device that your antagonist will only realise in retrospect you had it planned all those moves before. A nice example from L & F featured as the seventh of ejh’s Twelve Puzzles. The reason why the key move is 1.Kg8, rather than the equally plausible (at the outset) 1. Kg7 or Kh7, becomes clear later, at the end of the winning sequence, when on g8 the King avoids a self pin.

This particular puzzle was a “helpmate”, one example of the exotic creatures parading in the SOSC zoo; the sort of thing that has yer man heading for the bar spluttering “Helpmate in seven?…It’s you wot needs help, Mate. And now".

Geometry is to be found in the satisfying patterns of the pieces moving around the space of the board. My practical chess favourite of visual geometry is Taimanov’s breathtaking win in this position against Karpov. 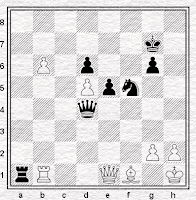 Of 38...Ng3+! Taimanov said "Perhaps the most beautiful move of my entire career....capture with the WQ [loses] the rook at b1...[and]...after capture with the pawn Black forces mate by the paradoxical manoeuvre of his rook from a1 to a8. Here the geometrical motif creates a truly aesthetic impression, as the rook, as though enveloping the entire board, moves round the corners a1-a8-h8 in order to attack the king at h1!"

In SOSC geometry may be happen before your very eyes, as in the Taimanov rook tour, or the quality may rely on a higher order of apprehension. Maybe mating with a K, N and B v a lone K is like that – the precision and economy of a minimal force co-operating at maximum efficiency, and with latent choreography.

Finally there is Flow, as in that K & R mate in ejh's puzzle nine by Pal Benko (thanks to Anonymous, for commenting thus on the blog). This is the passing game where the ball is moved from player to player from goal keeper’s throw to back of the net in one smooth seamless unfolding.

It is a term regularly used by Jonathan Speelman in his Independent chess column when referring to quality blitz and speed chess. As the tide of flow runs tactics hide in the shallows, and the game possesses an on-the-surface (not the same as superficial) coherence and directional inevitability. A practical example given by L & F is Karpov beating Ivanchuk (Tilburg Rapid, 1993) and according to the authors, earning the applause of his opponent.

So, what are we to make of all this?

Well, we can take a straightforward approach, consider it on its face value, and politely enquire: do the four elements really define the fundamentals of beauty in chess ; if problems and studies are artificial, isn't the “beauty” they possess contrived? Perhaps there are other types of beauty to be found in adverserial OTB chess?

There is also a more philosophical approach such as put by Peter Millican (Professor of Philosophy, Correspondence Chess expert, and Double Muzio Junkie) on page 249 of “Secrets” – paraphrasing – “You’ve got a set of elements, now what’s the theory that underpins it?". Which maybe one of those "it takes longer to understand the question than answer it" sort of questions.

That is enough for one post. I must dust off my thinking cap and come back to the heavy stuff .

But just to underline the point that those problemistas keep some weird beasties in their bedrooms, shake a stick at this behemoth mate in 290. 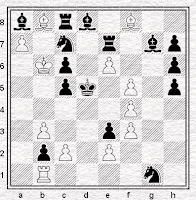 (Please don't write in - yes, it is an illegal position.)

I'll repeat that. Two hundred and ninety. Better not try this one at home. Instead, after you have opened this link (and enjoyed the Surrealist juxtaposition) scroll down and let the video do it for you. It's got loads of Flow. SloFlo. It only takes a couple of days to play through.

For more on the Double Muzio see the Game Room on the Streatham and Brixton Chess Club site here, and look at James Toon's notes.

Re: Paradox, I'm reminded of Tony Miles' comment that what a good player really needs is a warped sense of humour.

Has anyone written about/collected examples of humour in chess, I wonder? On the board, that is - not off it (like Tony Miles playing from a massage table).

God, I hope not. It could make one of the unfunniest books ever written.

Rowson talks about humour in chess in 7 Deadly Sins I think.