Christmas Bonus week here at the S&BC Blog: we're suspending the usual Mon-Wed-Fri schedule and posting something every day. In case you missed it, yesterday's unusual Tuesday post was Duffers' Delight III.

We were in the Holland Tringham, one of those pubs at the far end of Streatham High Road. I can't remember why we'd been at the Library now. Was it for T.C.'s talk on the games of Gioachino Greco? If so, that would make it April 2008 and that feels about right.

There were a few of us, maybe nine or so, and only one board. We'd decided against a consultation game for some reason, opting instead for one in which we'd each make a move in rotation. Since we were an odd number, we ended up playing moves for alternate sides. A strange start to a most unlikely evening.

We'd been playing for around twenty minutes before she came over. In her twenties, absolutely stunning and the very last person that you'd expect to ask, "Can I play?" I don't know what it's like down your way, but hereabouts playing chess in a public place is most unlikely to attract any attention whatsoever, least of all from mysterious unfeasibly attractive females, so naturally we said yes.

If there's one lesson that life teaches us it's that MUAFs are to be indulged. I'm not sure that we expected much. A legal move if we were lucky, perhaps something like Bc1-a6 or pawn to h1 if we weren't. What we got though, wasn't just a legitimate move, it was actually a very good one. The sort of move that gets better the more you look at it. It earned her a brief moment of silence and us a surprise that felt, to me anyway, almost as if a small rift had broken out in the space-time continuum. Set your internal monologue to "WTF?"*

She stayed around for another minute or two, dispelling in the process any initial thoughts that she'd perhaps just got lucky with that one move. Clearly she'd played before, and not just a little bit. After she took another turn, however, she sodded off, saying that she couldn't stay because she was on the way to the cinema with her boyfriend. I wondered then, as I wonder now, what precisely he made of her visit with the local chess folk. God only knows, but I go the impression he wasn't entirely unused to waiting around like this (I refer our honourable readership to the comments I made some moments ago).

Who was she? Since she dropped no glass slipper, I haven't the faintest clue. All I can tell you is that judging by her accent she had probably grown up somewhere in the Caribbean and that I had never seen her before that night and I've never seen her since. 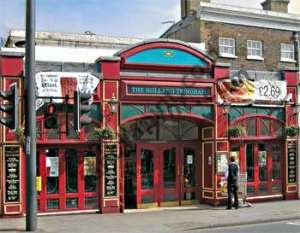 The Holland Tringham: the unlikely setting for today's story

is going to be at work here, but that's how I remember it now. My MUAF encounter is, I think, almost a great premise for a short story. Almost, but not quite.

Firstly, the fact that it actually happened notwithstanding, it just sounds too unlikely to be credible. Try to get away with presenting something like this as fiction and you'll just end up sounding like Jeffrey Archer.

Secondly, Stefan Zweig got there long ago, this being exactly the plot of his classic yarn, The Royal Game. OK, you have to switch-in the 1940s for the 21st century and substitute 'ocean liner heading to South America' for 'Streatham pub'; 'world champion' for 'motley array of club chessers'; and 'refugee from Nazi-occupied Austria' for 'MUAF'. The core of the plot, though - exceptionally unlikely person stumbles across a bunch of chess amateurs and turns out to be extraordinarily good at the game - is exactly what Zweig's novella is all about.

I say all this now because Radio 3 broadcast an adaption of the story - Zweig's, not mine - last Sunday. It's available on i-player until Christmas Day and it's well worth a listen if you haven't already heard it. My only disappointment with the play is that they cut my favourite bit, the radio script including the line,

"A man who was once fallen victim is always at risk ..."

"... in a case of chess poisoning, even if you're cured, it's better not to go near a chessboard."

at the end. Other than that, though, I've no complaints.

As a bonus, should the play not be enough for you, the broadcast also includes a pair of chess-themed readings, one taken from Anne Bronte's The Tenant of Wildfell Hall and one from a Spencer Holst short story called, simply enough, "Chess". If anybody here was sufficiently well read the Bronte story might already have appeared in our A Literary Reference series, but we're not so it hasn't. 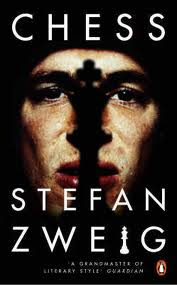 Zweig's book used to be known as The Royal Game and is now called Chess.
Why the change? I've no idea, but I blame international capitalism

As much as I'm fond of The Chess Club Murders, I've now installed the Beeb's version of The Royal Game as my favourite chess related radio play of all time. Well, that's first out of the two that I've heard if I'm honest.

We need more drama with a chess theme on the radio. Perhaps the BBC could be persuaded to adapt Desmond Lowden's Grandmaster - [opening titles; another scene] - the pilot for which is currently kicking around the offices of Impala Press (Film Division) and no nearer to being made into an actual TV programme than when it was published as a script in 2006.

I think I shall start the campaign myself - just as soon as I finish work on my petition to get a few more MUAFs in Streatham's pubs.


* I really wish that I'd made a note of the position and the move that she made. Alas not. The two great lost positions in my life are this one and the one in which I turned down T.C.'s draw offer in a club rapidplay a couple of years ago .


NB: Thanks to Gerard Killoran on EC Forum, for the original tip that The Royal Game was due to be broadcast.

Forgive my ignorance but what's 'MUAF'?