[Back to a spot of chess today. Normal service will be resumed in due course, no doubt - JMGB]

Montag's hands picked up the Bible. He saw what his hands had done and looked surprised.

Montag stood there and waited for the next thing to happen. His hands, by themselves, like two men working together, began to rip the pages from the book. The hands tore the fly-leaf and then the first and then the second page.

'Idiot, what're you doing!' Faber sprang up, as if he had been struck. He fell against Montag. Montag warded him off and let his hands continue.

I waited more than a quarter of a century to read Fahrenheit 451. I did Lord of the Flies for O level, but I had friends in another class who got Ray Bradbury's novel instead. My teenage self thought it sounded interesting and made a mental note to get hold of a copy when I had a moment ... and I finally bought one a couple of weeks ago.

The day after I finished the book the latest copy of CHESS plopped through my letter box. I opened it up to find Keith Arkell talking about his game with Jack Rudd at the recent Jessie Gilbert celebration tournament in Coulsden. Keith tells of how he'd intended to play 3 Nc3 after 1 Nf3 Nf6, 2 c4 e6, but had accidentally pushed his queen's pawn instead.

Montag doesn't seem to have been a chesser. I wonder if Ray Bradbury is/was. Be their owners GM or amateur hacker, chesser hands seem to do their own thing on a regular basis. It's certainly happened to me several times, most recently at last month's Sunningdale Open when in this position 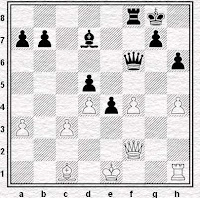 I tried to play 27 ... Bg4 with the thought in the back of my mind that I'd always be able to defend the bish with ... h7-h5 should the need arise at some point in the future. My hands had other ideas, though, and it was only as one of them was pressing the clock that they let me know that they'd pushed the pawn and left the bishop back on d7.

Not that letting our hands take over once in a while is necessarily a bad thing. Recently our friend Richard James was netchessing and found that his desired 2 d3 against his opponent's French Defence was corrected by his hands to 2 d4. Consequence one: an accidental IFE. Consequence two: a FIDE Master spanked.

Modest Mr J will tell you that a three minute game on the internet doesn't mean that much, but beating a titled player - regardless of the format - is more than your present writer has ever managed. Perhaps I should start things off and then, like Montag, let my hands continue? They seem to want to get involved so maybe I should just let them get on with it.

TIFE Index
Posted by Jonathan B at 8:00 am

I had to do My Family And Other Poxy Animals, which I still blame today for the B grade I subsequently obtained.

I did that too.

Fascinating fact: I once discussed Fahrenheit 451 down the pub with the award-winning historian Diarmid MacCulloch.

Jonathan, you should consider a series of Interesting BOCEs, as this was.

Justin, I also had to do My Family and Other Animals (either 1st or 2nd year at secondary school) but I don't blame it for the E grade I subsequently obtained. As I received the same grade in Maths there must have been other reasons, which I'll explain to Jonathan privately later.

Funny you should mention that, Richard, because I'm considering exactly that!

I had a similar experience (a couple of seasons ago) of playing the next move but one, as it were. Trouble was it left my queen en prise.

Sorry to show my ignorance, but what does BOCE stand for?

I studied Lord of the Flies at school. Actually, Richard's brother was my teacher. Surely that's a truly fascinating fact?

He played the wrong move, and he still beat me.

Martin - BOCE is an FLA, whereas IFE is a TLA. Of course FLA and TLA are both themselves TLAs, which I think makes TLA a metanym or something. Jonathan R will have learnt the correct word from my brother. (Bishops of Opposite Colour Endings by the way.)

Jonathan R - he was indeed: he told me many years ago. I wasn't sure whether you knew or not but was hoping to refer to this if you ever made a grammatical error on the Egregious Chess Forum.