I found this interesting interview on Susan Polgar's website.

Not a phrase you'll often read on this website, but the interested party in this instance was none other than Leonard Barden and the interview, with Willy Iclicki, is indeed interesting, for a few reasons.

precisely the same exclusive interview seems to have appeared on Chessdom on July 3. 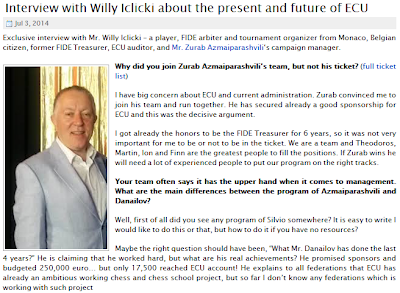 and yet the Polgar site neglects to mention where it pinched the interview from.

But talking about dubious practice in the chess world, the subject of the exclusive interview is the ECU elections, in which Iclicki is a member of Zurab Azmaiparashvili's team.

Azmaiparashvili's opponent in the elections is Silvio Danailov, who is being supported by Garry Kasparov (and, not coincidentally, the ECF) and Iclicki makes some eyebrow-raising comments about Danailov's term in office. One of these concerns his relations with fellow Board members.

Now I was wondering about Icklici's claim that


the President has put 4 out of 9 board members on his black list, doesn’t speak with them.

My memory may be failing me, but isn't a breakdown of relations with fellow board members normally reason in the ECF's eyes to remove a President, immediately so, rather than back them for a second term?

Or is that only with Presidents that Garry Kasparov doesn't like?

There's a few other things one could raise, including the interesting figure of Vladimir Sakotic, another individual who one suspects would be the subject of ethics-related commentary, rather than silence, were he on the side of the candidate the ECF (and Kasparov) doesn't like.

But what struck me as most curious was this:

It really would be immensely cynical if a candidate were to do such a thing, and plainly such an untrustworthy candidate could never be supported in the future. Could they?

Now from experience, just because someone is an associate of Zurab Azmaiparashvili does not mean they are to be believed, and moreover last time an associate made such a claim they were rebutted.

Still, you'd want to know either way, wouldn't you?

Did Danailov do what Iclicki accuses him of?

Did he pledge to "renounce his salary" and then reverse his pledge on the very day he was elected?

Any evidence either for or against the claim would be welcome.