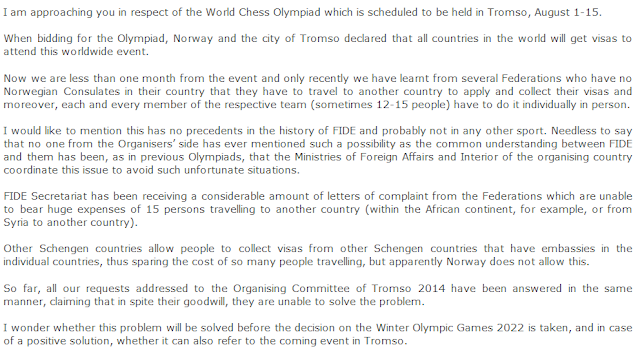 There's something of a kerfuffle been going on involving the difficulties some countries are experiencing in getting their competitors to Tromsø for the Olympiad.

In response the FIDE President has written an open letter to the Prime Minister of Norway. (Excerpt above.)

The Olympiad organisers have sent a response. (Excerpt below.)

As stated above, in spite (of) their goodwill, they are unable to solve the problem.

So in order to take part in a sporting event, competitors and officials have to travel to another country, in advance, to be fingerprinted.

This certainly puts into perspective the sort of things Western chess players complain about.

Now without throwing too much blame in any particular direction, perhaps some observations might be in order.

1. This is not the first time that federations, usually (though not exclusively) smaller ones in poorer countries, have had problems getting to the Olympiad.

2. Why is Norway hosting the Olympiad in the first place if it is not prepared to accept the bona fides of competitors? (I'm aware that the regulations were changed after the bid was accepted, but how come the potential effect on the Olympiad was overlooked in both organisational and governmental circles?)

3. Does anybody think such a thing would happen with a World Cup?

5. Why is it that some countries are not considered important enough to host an embassy, but when their citizens wish to travel to events to which they have been invited, they are suddenly important enough to be the subject of ludicrous security measures?
Posted by ejh at 7:55 am

I'm rather inclined to think you should hold international events in a dictatorship, provided you have the support of the dictator. The point being that the dictator can tell the jobsworths in the Foreign Ministry and the Embassies to extract digit and overcome whatever rules are usually employed to discourage visitors.

Unlike a dictatorship, Norway has had a change of government, with the new one being unenthusiastic about spending money on free holidays for the world's chess players.

If Norway are correct, this visa problem will affect any event to be held anywhere in Schengen Europe.

1. No this is not happening to all Schengen countries. Where there is no a national Embassy there are two parts agreements and another EU Embassy representing the other country. So people has no reason to travel. The Schengen visa is valid in all EU.

2. Who cares what Nor Gov thinks about chess players. Who wants to go to Tromso on August? The average temperature this season is 6 to 16 C. Last year the World Cup reported the worst by condition ever by 128 players.

3. The hotel infrastructure is not enough, the prices high,weather conditions bad. I would not spend neither a penny to be there on August.

4. The Nor organizers are obliged to assist all chess people equally.

From my experience of the 2013 World Cup, Tromso has beautiful weather in August - up to 20 degrees and almost 24 hour daylight.
Conditions were far from the worst ever - just the food at the hotel where most players stayed was bad and expensive. Playing conditions were excellent, although the security rules enforced by FIDE were farcical.
Most importantly, Tromso is simply an extraordinary part of the world, well worth visiting.

The average August temperature of the 20 last years in Tromso is 10C.

As far the last year organization is better to read the articles of many top players. I suggest the report from Caruana and his manager. All of them agreed about the same (bad conditions).

Finally, Tromso could be. mainly, on winter an interesting destination but that no means that NOR GOV can think the chess players as payed tourists. Nobody obliged them to organize the Olympiad. They have to respect and treat equally the chess family.

I've been there in June, by the way. Rather liked it.