It’s been a little while, so I’m going to restart the chess and dementia posts with a quick recap of what’s been going on since DG VIII: Celebrity. There’s been a fair bit, as it turns out and that’s not counting the proper dementia news that appeared in the press yesterday.

I’ve got three things today. Something (potentially) encouraging from FIDE, something from Chess Cafe that can be filed under 'More of the Usual Bollocks' and a little something that Richard James brought to my attention which is not entirely unconnected with the reason for the hiatus in the Doctor Garry series.


I’m indebted to Chris Rice of the EC Forum for the knowledge that FIDE has a Social Action Chess Commission. Also for the information that the SACC's most recent report includes a section on chess and dementia.

The news that a genuine researcher in the field - one Dr Robert Friedland - is on the chess and dementia case is most welcome. Equally encouraging is the talk of exploring ways in which chess might be used to, "decrease the risk of age-related dementing disorders" as opposed to the usual gross over-simplifications of the 'chess cures dementia’ variety.

This being FIDE, though, I have to admit to a reservation or two. The report does rather leave itself open to the charge of what Ben Goldacre calls 'scienceyness'*, although at the same time this sentence


We propose ... to promote the game of chess and related activities as a way to decrease the risk of age-related dementing disorders.


is concerning precisely because it comes without any scientific justification at all. Stick a 'potential' or a 'possible' in between "a" and "way" and I'd have no quarrel with it whatsoever, but what value is there in FIDE planning to


if they’ve already decided what the results will be?


These caveats notwithstanding, it’s to be hoped that the SACC is a sign that FIDE is about to raise its game with regard to chess and dementia. We shall see.


If I have mixed feelings about FIDE’s commission, there’s no reason for an equivocal response to the article "Health Benefits of Playing Chess" which appeared on the newly returned Chess Cafe last week. It’s just garbage.

A study of 488 seniors? The Albert Einstein College of Medicine? Does this sound familiar? Yes, it’s yet another example of the Verghese research being misrepresented with the claim that it "shows that playing chess ... measurably decreases the risk of dementia and combats its symptoms". Fuzzitduck.

I’ll not take it personally that whoever it was at Chess Cafe that chose to publish this nonsense hasn’t got around to reading either DG III: Dogs that Don’t Bark - which demonstrates that the Verghese study doesn’t even mention chess - or DG VI: Doctor Susan - which shows that Verghese and his fellow authors concluded that their,

... findings do not establish a causal relation between participation in leisure activities and dementia ....


The real issue is why it was the sparkly new Chess Cafe didn’t bother to check any of the claims made in that article before they republished it. We might also ask how it could be that they lacked any suspicion about a piece of writing that made all sorts of claims without providing a single reference to an academic journal to back them up.

Or is it that they simply do not care? Do Chess Cafe have a "We’ll publish any old shit as long as it’s saying nice things about chess" policy now? It would be a pity if so, if for no other reason than that market is already somewhat saturated. Does the chess world really need another website to compete with Polgar, Chessbase and Keene in this way? 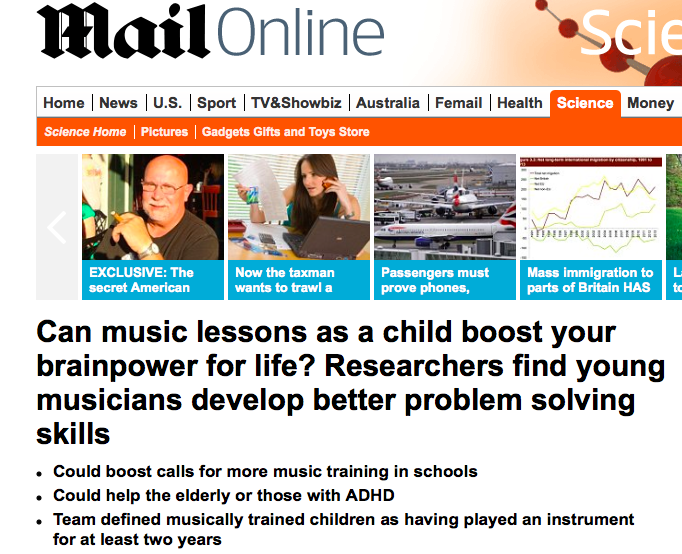 the reason that I took a short break from writing about chess and dementia was in part because I was  busy preparing for my Grade 1 piano exam. Coincidentally, the same day as the previous post in this series appeared Richard James pointed me in the direction of a Daily Mail Online Click-bait article which rejoiced in the headline, Can Music Lessons as a Child Boost Your Brainpower for Life? A question the answer to which "Could help the elderly" apparently.

If you insist on reading this piece you’ll find that it’s pretty much one of our typical chess and dementia stories with a few words changed. The standard 'miracle cure' narrative with the usual absence of a specific reference to the research cited meaning that it is impossible to check whether the claims made bear any relation to what the researchers say they found, let alone whether the study’s conclusions are justified by the data in the first place.

It’s funny isn’t it. All these simple solutions available - play a bit of chess, learn a musical instrument - and yet governments still call conferences (e.g. the one reported in The Guardian and elsewhere on the 19th June) where they say things like, "The truth is that dementia now stands alongside cancer as one of the greatest enemies of humanity." I wonder why that would be.