So far in Brixton Byways (adding, in parenthesis and in case anyone is reaching for the wrong end of the stick, that this is an unofficial history and is not commissioned by, written on behalf of, or is representing, Streatham and Brixton Chess Club - though the author is a member of the club - thus, as always with posts on the independent S&B Chess Blog, the authorial buck stops with the author himself) we have been dogging the footsteps of Brixton CC, one half of the modern-day Streatham and Brixton partnership forged in 1946. As we have seen the Brixton CC half goes back to the 1870s; but a separate Streatham club was established in 1918 just as WW1 finished.

Yes, the ancestor of the today's club, that which brought the Streatham bit to the party, was a creature of the C20th: a verity that has entered into S&BCC folklore, recounted by the godfathers of the club when telling, re-telling and embellishing, the legends of the misty past to the young pretenders, who in their turn recount it to the next generation...why it even said so in the local newspaper:
There. "Founded in 1918."

But how wrong we may have all been.


Consider this from November 1886.

So, new clubs were created in south west London: Balham (gone), Battersea (still with us, though oddly with its current home venue in Balham, and actually goes back to February 1885 according to its own website). And Streatham. In 1886. Thirty years earlier than the accepted wisdom had supposed.

Better have a closer look. But before we get on to Mr. J. Wilson, the prime mover, let's go to what we could take to be his address at the time: 14, Broadway. We can do so thanks to the remarkable archive created by local Streatham historian John Brown, to whom we are indebted for the rediscovery of Streatham CC's lost past. Here is No 14 today, much as it was when it was erected in 1884 by local builder Mr Hill, as one of a terrace between the Green near St. Leonard's church and Gleneagle's Road, which is now subsumed under Streatham High Road on a section known locally as "The Dip". We might consider this Streatham CC HQ #1.
Mr. Wilson, the main man at the first Streatham CC, had, rather unhelpfully, a common - as in frequently occurring - name, making him difficult to pin him down with certainty. But maybe we can hazard a reasonable guess. There was a Wilson on Board 2 in the early Endeavour team lists back in 1874. He was referred to in the chess press of the time as a strong player; that's seems likely to be him. And, there was a John Wilson in the 1881 census living at 69 Angell Road, North Brixton - born circa 1825, thus by 1886 age 61. He was a retired commercial clerk. That could be him, too - a clerk sounds right (which is to say, it fits in with my now self-fulfilling hypothesis about the demographic of our early members), and a retired one would have the time on his hands to try and start a new chess club in Streatham, don't you think?

Undeniably, though, we have a game of a John Wilson, from the 1884 SCCA championship, in which he defeats Wyke Bayliss who was to become Surrey champion a year later - both players were stated to be from "Endeavour", as Brixton CC was initially called. That also seems pretty likely to be him. The game was given in The Chess Player's Chronicle of 23 January 1884. The opening was called a "Fianchetto (Potter's)", and the notes (in descriptive notation) are from the CPC:


After a long endgame he got there...but as for his chess club initiative there is good reason to think that John Wilson's putative Streatham club didn't quite make it to fully fledged status. The evidence for this comes from reports of chess activities in the Streatham News, & Tooting, Balham & Tulse Hill Advertiser in the 1890s. Again we are indebted to John Brown's astonishing collection of local press cuttings for sending us hurrying back to the Lambeth Archive at Minet Library where the paper is on microfilm - from its first issue in 1891 onwards.

"The Streatham Chess Club opened their third session last Saturday evening at their new premises 5, Queen’s Parade (opposite the Railway Station). Any gentleman wishing to join this popular club should communicate with the hon. secretary."

A club meeting for its "third session" in 1893 would have been inaugurated in 1891 - five years after Mr.Wilson's venture in 1886; so not the same outfit, but the one laying claim to the appellation "The Streatham Chess Club", and a "popular club" at that. In the same issue of the News, in a listing of local clubs of all sorts, the hon. secretary of Streatham Chess Club is given as W. Morris esq of Heath Villa, Pendennis Road.

Queen's Parade, where the club had its "new premises" in 1893 is , like the Broadway a hundred yards away on the other side of the High Road, still there in Streatham...
... and perhaps this is the real Streatham CC HQ #1 (or #2, if there had been "old premises")...and thanks again to John Brown's archive we can fill in a bit of the background; including that to avoid confusion with the countless other "Queen's Parades" etc in the capital, it was re-designated part of Streatham High Road, probably around 1891 in the great GPO address-rationalisation of the time (with "Streatham" added to "High Road" to distinguish it from all the others...). No. 5 Queen's Parade (the name hung on in popular local usage in spite of the GPO...so much more caché than "High Road") was, in the 1890s, variously a glass and china shop, coal merchant's agency, and draper's store at street level, with dwellings, probably rented, above. However in 1895 it was also home to the local Osborne Cricket Club, suggesting the possibility of some wider social or community use in the period (all this from Kelly's with John Brown's assistance).

But it is the chess club rather than the building that really interests us, and another report on March 19 1892 had this...

...which is interesting because we are now five and a half years down the line from November 1886 and Mr.Wilson's chess operation is still on the road, though reported as a "team" not a "club", suggesting a less formalised affair, playing still in members' residences, maybe.

"STREATHAM CHESS CLUB. – Prior to closing the united session this club held its annual meeting last week, Mr Vavasour Earle, president, in the chair. The Hon Sec., Mr. W. Morris, in his report, congratulated the members upon the financial position of the club, also on the present number of members, and their strength as players. Interesting analysis were submitted of the work done during this session, showing the number of played and the total number of games won, drawn or lost by the respective members engaged therein. Sixteen matches were played altogether, resulting in the club winning 9, drawing 3, and losing 4. In addition to the matches played, the club has its usual tournament in which about 120 games were played. A cordial vote of thanks was passed to the hon. sec. for his interest in the club, which may now be considered quite an institution in Streatham. The club will be re-opened about 1st October, and as members are anxious that the pleasure derived from the royal game be extended to others, the hon. sec. will be pleased to receive applications from gentlemen in Streatham wishing to join."

Clearly a thriving outfit, with a local presence. But what does "united session" mean? Perhaps it is an indication that it had joined forces: with "Mr Wilson's team" maybe. Or perhaps with "South Streatham CC" - yes, there was a South Streatham CC, as well, which had been in the News on the 6 April 1892: Streatham 7.5 v 4.5 South Streatham. And so we encounter the same sort of confusion-cum-profusion of local chess clubs in Streatham as we encountered in Brixton in this period. There were possibly three chess outfits in our smallish, but burgeoning, Surrey neighbourhood.

"Nightingale", incidentally, must be the Nightingale Lane CC on the Balham/Clapham borders. The BCM of October 1893 mentions the September AGM of the Balham and Balham Courts CC (whatever the latter part refers to), but you'll notice there is no match against nearby Tooting, which at the time was part of the Parish of Streatham, and home to H. E. Bird. There was to be an attempt to start a chess club there in 1893:


Otherwise, we have not turned up any other references to a Tooting CC in the Streatham News, or in the chess press of the time, so perhaps it was just a flash in the pan.

It is noticeable that all the Streatham matches above were against nearby teams. That may have been just selective reporting by the Streatham News for the benefit of its Streatham readership; or it may have been an accurate reflection of the almost parochial nature of the "popular club" and "institution" whose members preferred their competitive pleasures close at hand, playing at their club nights on a Saturday evening when they may have also enjoyed other indulgences, sociably taken, alongside their chess...

Yet, for all that, the chess activities of the local clubs (well two of them, anyway) were sufficiently serious to merit the attention of Isidor Gunsberg (also living close by), as during the Streatham v Balham local derby in October 1895, reported in the News of the 26th.


"During the evening the club had an agreeable surprise by a visit from Mr. Gunsberg, who seemed interested in the match, taking notes of the same, and before leaving made one or two good suggestions which will doubtless be carried out by the Club."

Which reflects well on Gunsberg (in spite of that "seemed interested") and indeed he was enough of a local celebrity to be given a generous obit by the Streatham News on 9 May 1930, with a letter the following week by a member of Streatham CC (W. Spearman of Thornton Avenue) who recalled playing Mephisto at Crystal Palace some sixty years previously - see obit and letter in the Appendix. 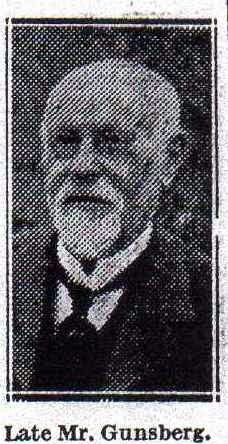 So, what of the President, Mr Vavasour Earle, and the Hon Sec., Mr W. Morris back in 1893? More Streatham news of these gents in a fortnight's time. Much more.


Appendix: Obit of Gunsberg, and letter from Streatham News 9th and 16th May 1930, respectively:

Tim Harding writes about the oldest chess leagues in the world in his new column at the relaunched Chess Cafe. Martin, this series and the blog get a mention.

Thanks Angus. We noticed! So, thanks Tim for the reference. I've linked his article in various places in the series.

I notice that the old 'call for players' specifically mentions "gentlemen". Were ladies strictly verboten or is that just the language of the time.

Incidentally, a photograph of Gunsberg’s house - or one of them, anyway, can be found here.

Interesting one Jonathan. I've not come across any lady-chessers yet in the Chess Mag references to Endeavour/Brixton or Streatham CC's. Martin Cath has kindly shown me membership records of these clubs from the 1930s - no "ladies" then either.
A lot though has been written about the Ladies' Chess Club, founded in 1895. Bat Girl is a good place to start. The Ladies CC played Brixton CC, on more than one occasion.