You'll recall that the weekend before last, Jonathan Rowson gave a simultaneous display in order to raise funds for Brandelhow Primary School in Putney. One of his opponents was Streatham and Brixton veteran Robin Haldane, inventor of the Haldane Hack.

Here's the game, which notes based on those Robin was kind enough to send us. Kind enough, and brave enough to do without computer assistance! All my additions are of the more cowardly sort.

Robin: "I was happy when White opened with the Ruy Lopez as I thought there would be more chance of a tactical game than if he had started 1. c4, 1. d4 or 1. Nf3."

Robin: "6. Bxc6 dxc6 7. Qe1 is a line that Les Pickett recommended in the 1970s in a long defunct magazine called Chessman Quarterly. It looks innocuous but forces Black on the defensive." 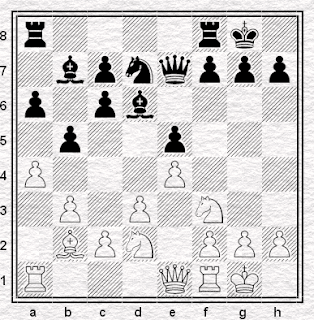 Robin: "Afterwards Jonathan thought his idea of 13. g3 followed by 14. Nh4 was too slow. It helped my idea of rushing the f pawn forward."

ejh: This is so, but the computer likes 17.Qh6 instead 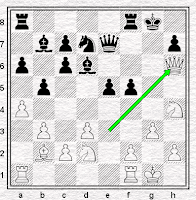 when ....f4 is met by g4, with knights going to e4 and/or f5. This isn't a disaster though, it's just better for White than fighting for a draw the exchange down.

Robin: "The crucial position arrived after 24. Nge1."
So it did. 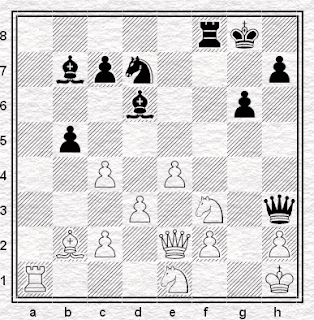 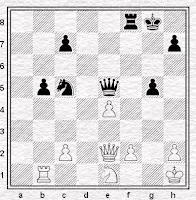 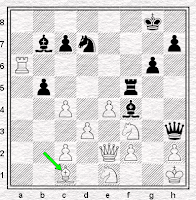 with a messy outcome but one in which despite a two-pawn advantage - in the diagram position, anyway - it's White who's going to have to work for the draw. 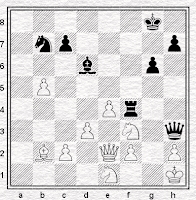 with three pawns for the exchange and the threat of d4+e5 closing the file on Black's attack.

But now White's in trouble. 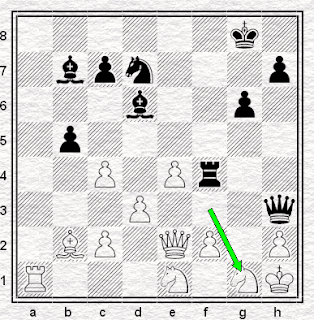 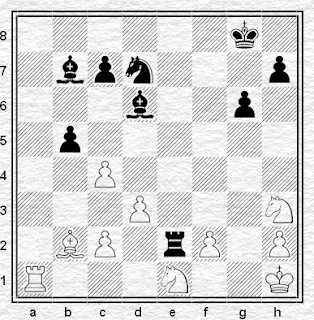 So much trouble he's lucky he's not lost. 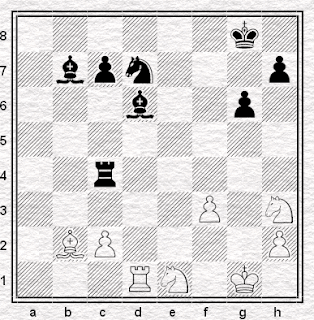 Robin: "In the final position White offered a draw. I think Black is better but after say 30...Ne5 it would be very difficult to convert it into a win so it would have been rude not to accept the draw." 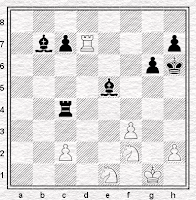 while I can see what Robin means, I can also see two big bishops on an open board and personally I might have played on a bit.

But Robin is more polite than me. Congratulations to him on his draw against a grandmaster and thanks again for the notes.

(I am informed that it is Len Pickett rather than Les. Thanks.)

It was recommended to me once that a defence to the Pickett system and similar ideas was the long-winded plan of retreating the Nd7 to b8, playing c6 to c5, followed by Nb8-c6 with the idea of controlling d4 or dropping the Knight in.

Checking the database, you don't actually have to play Nd7 immediately . 7. .. c5 can be played, to meet Nxe5 with Qd4.

I wonder why Rowson chose that opening, but he did play the delayed capture on c6 in a few games as a junior, getting on for twenty years ago.