Obviously it has been overshadowed by the recent and entertaining arrests among the upper echelons of FIFA, but if you follow chess news you'll know by now that there are very serious allegations being made about the Bulgarian Chess Federation. There's a lot of detail, but to cut a longish story shortish I can't really do better than refer you to the summary in Peter Doggers' chess.com report: basically that excessive sums have been claimed under false pretences and then paid into an account in Slovenia which is unknown to the European Chess Union - but which is controlled by a similarly-named entity registered in Delaware.

Of course these allegations, although being investigated by Bulgarian prosecutors, remain unproven in any court and the current leadership of the European Chess Union, which is pursuing the allegations, is in the hands of Mr Danailov's enemies.* Nevertheless they represent a serious embarrassment for Mr Danailov.

They also represent a serious embarrassment for the English Chess Federation, which voted heavily to support Mr Danailov when he stood for a second term as President in 2014.

They couldn't, of course. They could, however, have known - and did know - that Vladmir Sakotic, who had been proposed as Danailov's running mate, had been obliged to resign as head of the Montenegro Chess Federation (and withdraw from consideration for the ECU poll) following similar allegations.

This was in February 2014, more than three months before they decided to back Danailov. It did not apparently give them any pause.

They also knew that Andrew Paulson had made other very serious allegations against Mr Danailov, including the claim that


as President of the ECU he tried to extract a EUR50,000 payoff from me in return for having introduced me to the Mayor of Madrid

upon which claim he later expanded in no small detail.

These allegations don't appear to have given them pause either, perhaps because they had been busy removing Mr Paulson from his post as President of the English Chess Federation, a coup prompted by Mr Paulson's announcement that he proposed to support (and be deputy to) Mr Danailov's opponent.

Yet these were serious allegations against both Mr Danailov and his erstwhile deputy. What effort did ECF officials make to establish whether there might be any truth in them? Why did they have no apparent effect on the ECF Board's enthusiasm for Mr Danailov?

Moreover, when shortly afterwards, Willy Iclicki accused Danailov of refusing to speak with other board members, and having reneged on a promise to forego his salary, did this cause anybody to reconsider their support, or to enquire as to whether what Mr Iclicki said was true?

I'm guessing maybe not. I'm guessing they didn't take any of this stuff into account because they were to all intents and purposes looking the other way. 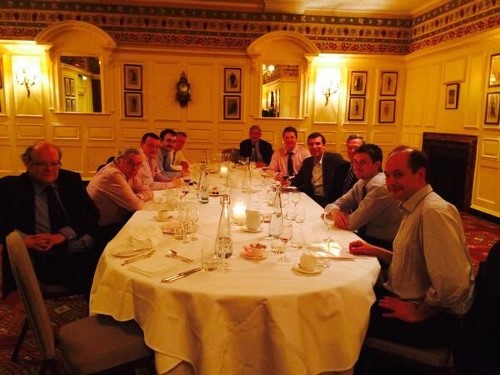 Insert "looking the other way" gag

I mean let's not assume somebody's guilty just because they're accused of something, but at the same time, when somebody's accused of so much, wouldn't it be normal to expect them to clear their name to general satisfaction before going out of our way to put him back in charge of a bunch of money?

Let me say once again:

Or at least our representatives do.

[* Curiously I am blocked from following Mr Danailov's account.]
[Danailov/ECF image]
Posted by ejh at 7:55 am

Hey, I guessed right! Simpson's. Perchance do any of the pictured gentlemen share initials with those who voted for Danailov?

AOC asked: Perchance do any of the pictured gentlemen share initials with those who voted for Danailov?

Those with an asterisk after their name were ECF Board members at the time of the Board meeting in which the FIDE and ECU voting decisions were made.

My recollection of the dinner was that it was convivial and pretty supportive of Silvio Danailov. The consensus was that Mr. Danailov spoke well.

Personally I was against the ECF voting for Mr. Danailov's ECU ticket, principally as I was concerned about his role in the "toiletgate" World Championship episode and about the ECU/European Youth Championships/Montenegro situation. For what it's worth and had it come to it, I would also not have supported the ECF's vote going to Zurab Azmaiparashvili's ticket.