One of the few consolations of illness is other people feel obliged to listen to your complaints. Not so for me this past week in London, since everyone else I know has been ill too. So I'll instead let the chess blogosphere know that these last few days, I've been feeling like black's position here: 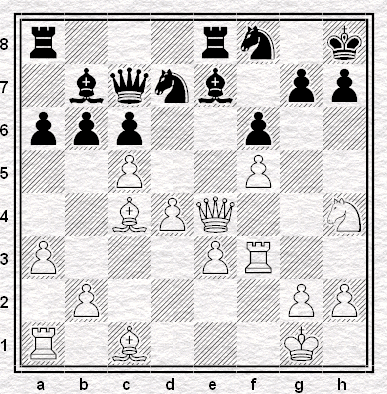 Not good, in other words.

Still, tomorrow is another day, and a healthy victory follows crushing defeat, sooner or later. How did Pagantintov playing white put Routilin playing black out of his misery, like a dose of industrial strength Paracetamol, in this one from Athens 1937?
Posted by Tom Chivers at 10:07 am

Your obviously not feeling well Tom - you've set a puzzle I can actually solve!

Very impressive - I actually thought this was one was really quite tricky, given that 1.Ng6+ looks very natural but is actually a dead-end.

It reminded me of a position I recently saw in a John Nunn book.

He was illustrating an argument about the problem with selecting 'candidate moves' then analysing each one in turn to decide which is best.

There, as in your puzzle, there's no logical reason to choose the winning move, unless you've already seen the idea behind it - and thus it would never get onto a potential move shortlist.

There, as in your puzzle, you have to ask yourself, 'what if the knight wasn't there?'... and pretty soon you've got the right move.

In looking at your puzzle, I saw straightaway that Ng6 was desirable and just as quickly saw it didn't work. Then i remembered the Nunn position and realised at once there was a move that HAD to win.

The longest part of the solution was working out the specific variations that proved that sudden flash of insight to be correct.


Like in the Sherlock Holmes puzzle a few posts ago - sometimes it helps to know what questions to ask!

Yes this is the common critique of the candidate move method. There's an interesting discussion similar in Rowson's Zebra book too.