A short draw in the Petroff 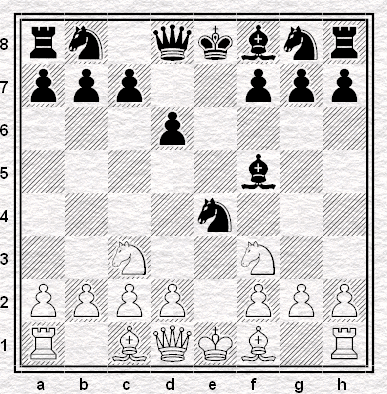 There's a older and more dramatic pre-arranged draw story than the one from yesterday. Initially it concerns a game played between Tony Miles and Larry Christiansen at San Francisco in 1987, which game had, informally, been agreed drawn in advance. It opened with the moves 1.e4 e5 2.Nf3 Nf6 3.Nxe5 d6 4.Nf3 Nxe4 5.Nc3 and now Christiansen produced an apparent theoretical novelty with 5...Bf5 reaching the position in the diagram above.

It certainly seemed to do the job as the game continued 6.Nxe4 Bxe4 7.d3 Bg6 8.Bg5 Be7 9.Bxe7 Qxe7 with the sort of sterile equality one does not associate with Robin Haldane's open games and the draw was agreed on move twenty.

There is, however, something terribly wrong with this sequence which, apparently, Miles saw and indicated to Christiansen with a hand movement before making another move on the board - since the draw had already been agreed he couldn't reasonably take the win that was there.

Hand movements, however, are not recorded in Informator (nor are informal draw agreements, though it would be possible to think up an amusing symbol by which they could be indicated) and the innovation greatly impressed the young Viswanathan Anand. He therefore tried it out in the tournament at Biel the following year. His opponent, one Alonso Zapata, proceeded to inflict what may be the fastest defeat ever suffered by an player of that calibre.

Take care (as Anand did not) and spot the win before you play through the games.

But there's more. Remarkably, according to Chessbase Online Database, the position has been reached eleven times since Anand's notorious disaster. (Indeed, it had actually been reached once before Miles-Christiansen: at the Lucerne Olympiad in 1982, where Joe Rush of Papua New Guinea anticipated Christiansen's TN by five years. Against Maher Saleh of Canada, who saw what Miles saw and - unlike Miles - played it.)

Even more remarkably, two of these eleven games have been won by Black.
Posted by ejh at 10:30 pm

I'm intrigued as to what Mile's hand movement might have been !?!?!

BTW:
I've seen a Streatham player (I'll call him "Monsieur A") pick up an easy point (as White) in this very variation. It was a game against Crystal Palace as I recall.

I would think he picked up the queen and slid it to e2, then said "j'adoube" and put it back?