Let me warn you from the off - I'm in a grumpy mood.

Last night I lost again. I've now come a distant second in three of my last four games - and I've not won in six. Things are getting so bad that the point I "gained" by default against Crystal Palace last week looks like being one of my best results of the year.

There's only one thing for it at times like this - pray to the Patron Saint of Chess Players then seek solace and amusement in the misfortunes of others.

As I said in my original post, Cafferty and Hooper wrote “As a curiosity it [Tarrasch - Alapin :JB] may be quoted as the shortest decisive tournament game between masters”. C&H were writing in 1979 and since then the chess master fraternity have evidently been burning the midnight oil looking for improvements on Alapin’s play.

Thanks again to Fox and James’ The Complete Chess Addict (1987), I learn that at the 1984 American Championships, Shirazi – Peters produced the following:- 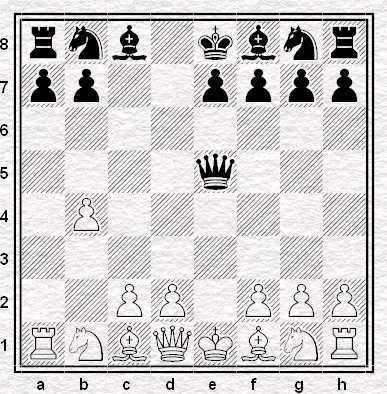 In case you were thinking Shirazi is just some patzer, I’m pleased to tell you he’s an IM and was rated 2465 at the time (according to CB’s Big Database 2003). Even more amusing, he managed to end the tournament with the rather wonderful score of 0.5/15. His game with Peters (2500 in 1984) was played in round 13. It’s probably safe to assume he was rather demoralised by then!

I'm back in the ring tomorrow night playing for the second team in the London League. I'll travel to Golden Lane happy in the knowledge that, if nothing else, at least I've someway to go before I translate my 0.5/4 into Shirazi's sterling result.
Posted by Jonathan B at 12:31 pm

I've done that. I've had it accepted, too.

Mind you it was an equal position.

*Justin*
"Mind you it was an equal position."


*Tom*
If you remember an earlier thread ... I'm not supposed to be offering draws at all, move 1 or otherwise, for the remainder of the season. Mind you've I've broken that resolution already.

Perhaps I should just resign at move 1 and head for the bar.

Things are worse than I thought.

I couldn't even solve Ray Keene's puzzle in the times today.

I can feel the grading points seeping out of my ears :-(

The shortest master game could be a little misleading, because Alapin and Shirazi resigned after losing material, whereas I believe at least a few players in Olympiads and tournaments have been mated by move 6--whether any were officially masters is another question.

I'll wager that the number of masters who've lost a piece by move 5 and played on is legion--none of them wanted to be remembered by posterity...

*Warheit*
I agree being mated in six is much more impressive than losing a piece in six then resigning.

That said, a master blundering a piece in six moves is more amusing to me than a patzer being mated in the same.

btw: I've got a few examples of shorter decisive master games that hopefully will see the light of day soon - although they're also of the piece blunder variety.

*Tom*
I was talking about Tuesday's problem. I got the right move at least but couldn't work out how it worked - although it was quite straightforward really.

I can't remember the last time I looked at a Times puzzle. 1.Qxh7+ is just my blanket guess for ALL of them.

that's funny - you're probably right most of the time too.