The Need for Speed? 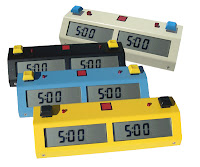 Some changes are afoot in chess time limits, it seems.

Outside of the elite, top-tier seven hour games, FIDE and Kramnik apparently propose that everyone else will play at a rate of:

all moves in one hour, plus 10 seconds per move

Personally, I think I'm in favour of this. I get very bored during longer games, and it would enable London weekend tournaments (even perhaps one day tournaments) to be FIDE rated. On the other hand, John's multiple criticisms seem hard to argue with.

What's your view?
Posted by Tom Chivers at 2:25 pm

My views are partially expressed in the comments box at the BCM blog. But as somebody who really dislikes rapid chess (at one point my British rapidplay and normal-time-limit grades were 54 points apart) I'd be totally against it.

I also think there are all sorts of other reasons to be against it, mostly revolving around creativity.

I do however have trouble believing it and I wonder if your suggestion - that this may constitute a minimum rather than a compulsory limit for rated games - may be right.

I stayed in Australia for a few months in the early 1990s. I played in a couple of tournaments there that were run along the lines of all moves in one hour. It was quite fun as a bridge between rapid chess and proper chess but I'm not sure I'd like to play every game that way.

Currently I play regularly in two leagues. London (36 in 90) and Croydon (35 in 75 then 7 in 15). I personally consider the Croydon time control too fast.

In a way the change doesn't affect me in that I'm not FIDE rated and probably never will be. Also I don't play in tournaments much.

Still, the thought that the governing body doesn't seem to like chess very much is rather sad.

It'd be like cricket deciding there would be no test matches anymore just 60 overs a side matches.

I'm not interested in having a FIDE rating, so if this stipulation is just for those who want a FIDE rating then I think it's crazy, but it wouldn't affect me.

If they are trying to say ALL games should be played at this control, it's an even crazier idea!

Chess is a thoughtful endeavor, not fast food.

* j'adoube * fast food takes what - ten minutes from start to finish?! Blitz chess is fast food! For a good meal in a nice restaurant - I'd say you're looking at a touch over two hours :)

In the text of the statement it says "This proposal will be considered by the next Presidential Board meeting". So, presumably, it's not a serious possibility yet. (The Presidential Board wouldn't have the authority to make the change, would they? The arbiters who look after the laws of chess would at least need to be consulted, wouldn't they?)... But maybe it's preparing the ground... Also a ten second increment isn't sufficient time to ensure that all moves can be recorded and that might cause problems - for example with determining a threefold repetition.