A mixed bag of news this time around for Streatham & Brixton Chess Club.

Whilst we comfortably beat Crystal Palace in the Surrey League 6-2 - after, that is, they defaulted three boards - Wallington knocked us out of the Lauder Trophy 4-2, although at least one of those points was a thumping win from Richard, that you can click play through. In the middle, the Croydon League match away to Crystal Palace on Monday 5th March is poised 1½ each - but Adam FF's adjudication looks more than likely to go in our favour.

Meanwhile, the second team's fine run in London League Division 3 has, alas, recently stumbled. Twice in fact. We lost two matches in a row; one against Metropolitan 2 via the outstanding adjournments, the other against Metropolitan 3. Promotion looks like it'll have to put on hold, for this season at least.

Things continue to go well for our First Team in Division 1 however. Whilst Angus wasn't able to squeeze the full point from his slightly advantageous adjournment - meaning we lost the match versus Kings Head I 6½-5½ - Susan won her queen endgame leftover from the match against Athenauem, a fine technical achievement, rounding that one off 8-4 to us. 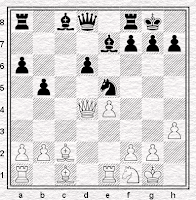 Equally impressively, last Thursday saw a weakened version of our first team crush Dulwich 8-3, with Andrew's tricky game adjourned. I say weakened - but perhaps not that much so, since despite several absentees we were happy to welcome Eddie Dearing to our side, where on board 1 in his club debut he solidly drew against Jovanka Houska. Also from that match, Adam FF won an impressive game - full of accurate, detailed and subtle calculation - against the talented junior Callum Kilpatrick, the complications in which began with a nice opening nuance in the diagram position. How can white to play best deal with the dual threats of the tactical 15...Bxh3 and the awkward 15...Bf6?

By the way, a journalist and photographer from the newspaper The Sunday Telegraph came to watch the match. The piece that resulted might have been better headlined: "Man looks for night-club in chess match; is disappointed". And they say chess players are strange...

Finally, if that's got you in the mood for some chess, then you might be curious to know this year’s Trost Trophy will be held at Crystal Palace Chess Club on Monday 26th March from 7.45pm. This is a ten-second ‘buzzer’ tournament comprising six rounds – entry costs £2 and first prize is £30. Contact David Hodgson for more details and to book your place.
Posted by Tom Chivers at 11:43 am

The Wimbledon v Dulwich game should be the decider, shouldn't it?

I wonder if the Telegraph journalist knew that Brian Smith pays his Wood Green players?...

To add to Justin's point/question: Wimbledon have acquired four decent-strength Poles and so are capable of putting out a pretty good team - I see they're currently giving Cavendish 1 a run for their money (in match 184).

I don't think it is particularly clever but 16 f4 looks like a good move in Adam's game. I suspect that is not the one played, though.

Richard's opponent in the game was my course leader on my PGCE (teacher training). I didn't know he played chess until we played Dulwich one night.
Andrew

I thought f4 as well for AFF's game.

I played at Golden Lane tonight. Number of cardigans on view - 0. Number of Daily Telegraph journalists on view - 0. It's a shame cos I'd brought a cardy with me to slip on in case he turned up again.

Hope you and the team did well Jonathan . . .

The move Adam played was 16. Rd1. Now if 16...Bxh3, 17.Qxe5 ought be a techincal win for white - there'll be enough material in the endgame to make the two pieces superior to the rook. This, in fact, was what happened in the game. 16. Rd1 also scores 80% in the database I checked in.

16.f4 to me looks kind of ropey, what with the e-pawn then undefendable, and the Qd4 and Kg1 looking rather tasty. Although I haven't checked this with the computer, it might well be a move too - these are very human worries which might not have much objective truth behind them. And the more I look at it, the more I wonder if after 16. Rd1, 16. ... Bf6 is possible anyhow - ..Nc4 follows the exchanges on d6!

Well I only gave f4 about 90 seconds of thought so i wouldn't be surprised to find out it's probably rubbish.

BTW: I played that Callum Killpatrick lad last year, possibly the year before, and got a comprehensive stuffing. Unlike many strong (or otherwise) juniors he seemed a very pleasant young fellow. What's his grade now?

I think he's a 170 or so. I've met him at a few of the chessabits and also thought he was a decent chap. Apparently he beat GM Pert in a serious game recently and annotated it for a magazine; my hunch is his ECF might jump a bit next year...

I beat him in S&B's opening match last season.

I'm not too sure about Rd1 in hindsight.

I had had this position before against a strong player and he recommended Rd1, so I played it in this game!! After the exchanges on d6 and Nc4, as Tom suggested, maybe White sacs on f6?? Not all that convincing though really. Even if Black is spooked by the exchange sac, 16. ... Qc7 also looks pretty decent for Black.

I reckon there's a fair chance Black will fall for Bxh3 like he did in the game, so maybe it's worth a go!! ;-)

The exchange sac is interesting - I had a look at it too - you'd have to be very brave to go for it. I think ..Qc7 can be met by Ne3 idea Nd5 though. Really white just needs to hold on to his structural edge against the d pawn and he ought have the better of it...