Why do we play chess?

Because, argues the Kenilworthian, our losses constantly remind us of our lack of knowledge about the game, and this then causes us pain or at least curiosity - and so we come back to the game again and again to learn more. And of course, the more we learn, the more we know how ignorant we truly are, and so the cycle of knowledge, knowledge-gaps, pain, curiosity, learning, knowledge!, knowledge gaps repeats and repeats.

Could well be. "Of chess it has been said that life is not long enough for it, but that is the fault of life, not chess," said William Napier (commonly attributed to Irving Chernev) and, indeed. If we knew we could master chess with, say, five years effort, would we bother? Few do with Connect 4, by comparison for example. And didn't Bobby Fischer say we should all play Chess960 because the middlegames of chess are effectively solved? Could a lack of the pain and the curiosity caused by knowledge-gaps be why he is no longer playing? (As an aside, however, I would be more inclined to speculate on Jan Hein Donner's argument that: "No one is as lonely as the world champion" in any attempt to answer this question.)

On the other hand, the comments here suggest various other interesting reasons. And I'm not 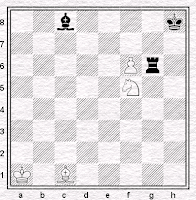 sure I can apply all this to myself very convincingly. I started playing socially as a kid after school for fun, and by around my teens began to appreciate the game sufficiently for its own sake - as a thing of beauty, drama and excitement. No doubt curiosity and competitiveness were there too. But when answering the question "Why do I play chess?" I am more likely to formulate some watered down version of Hans Ree's explanation: "Chess is beautiful enough to waste your life for." Ree isn't the only chess player to stress this side of the game of course. "If you have never seen this study before and fail to find it exciting," wrote Levitt and Friedgood about the study by V Korolkov on the left for instance (1st Prize, Lelo 1951, white to play and win, click to enlarge) "our only advice is to give up the game straight away. You will have no future in chess!"

Life is full of questions and attempts at answers and then more questions. But only one more for this post. Why do you play chess?
Posted by Tom Chivers at 3:46 pm

I don't know. I think because I do and once I did, I was fascinated and frustrated enough to carry on.

Also because I'm antisocial by nature, of course.

I certainly don't think I'm trying to get to that point where I play some kind of perfect game. I really don't see today's game as trying to make up for the errors of yesterday's.

I'm sure there are loads of reasons I play chess that I can't really articulate. I'm not sure that bothers me too much. Ultimately I play chess because I like it. That's good enough for me.

I've probably done this story before, but years and years ago I came into work on a Tuesday having been at the chess club on a Monday evening.

"Did you enjoy yourself?" asked a workmate.

"Oh, I never enjoy myself playing chess", I replied, which wasn't completely true but was nevertheless true enough.

"Why do you do it then?", she asked. A not unreasonable question.

I play because i like winning and i've found a level where i usually do.

My hero the good Dr. Tarrasch said it best; something about "The power to make men happy," as I recall.

Because i like people to think i'm smart :-)
(just kidding)
I play because it attracts all the hot girls :-)
(kidding again)
But really, i play because it helps me to forget. Maybe it makes me forget even too much for my own good. But that's why i play it. I can really lose myself in chess. In every aspect of it.

Oh, and btw, is your Java installed correctly? You need Java to view my game. Just as you do when you visit ChessGames and view games there. Anyway, the game ain't all that special. But if you really want to see it, i'll put up the notation of it, so you can copy and paste it in whatever you're running :-)

I think there are lots of reasons why I play chess.

I enjoy the logical element of the tactics in the game and the aesthetic quality that clever moves can create.

In agree with the Kenilworthian article - it's like an itch you can't scratch. No matter how much you practice and study there will always be more things you don't know than you do know.

But the main reason I think most people play chess - including me - is that we all like to kid ourselves that we're smarter than average (or at least smarter than the man/woman sitting opposite us at the board, or the other end of the internet connection).

Winning a chess game re-inforces this vanity; losing makes us come back to the board again to prove to ourselves and our egos that the last result was an aberration!

thank you for your most thoughfull and correct comment at my blog today. how right you are, on all points!

im a bit tired, right now, and it is late here on the western usa, so i wish to reply seperately at another time, in the near future, at my blog, but thank you, and greetings from seattle, heartily. dk

Thanks for the interesting replies.

One thing I keep on wondering about is the question: "Why do we like chess?" This is *different* to the question, "Why do we play chess?" since you can play chess without liking it. Kasparov was like this; "Chess is mental torture" as he put it. Also when he describes his great wins, he always talks about enjoying them only retrospectively.

And I think for most serious OTB games, I really do not like the experience of doing it. At least I don't find it pleasurable or happy. But the pleasure and happiness comes after, if I've won or played well or whatnot.

Perhaps the need to focus and concentrate during a chess game results in us not enjoying the games while they are on-going because of the hard work and stress involved.

It's only afterwards we can enjoy them in retrospect - at least, when we win anyway!

Well yes - meaning, we play chess in spite of *not* liking it!?

*EDWIN*
Yes, that idea of losing yourself in a game of chess, or just studying a random position - that definitely applies to me.

Looking at a chess book or thinking about a game can definitely make a dull journey pass quicker, or just relieve me of the stresses of daily life for a bit.

*RYAN*
I'm not sure I recognise this idea of chess players trying to prove they are "smarter than average" - either in myself or those around me. Some people perhaps but not in general.

I've never really considered chess an intellectual game. Further, if I wanted to consider myself smarter than the average bear then there are many more concrete ways I could do it.

It might be different at the top end, but at club level I don't think we generally emerge from a chess game thinking "God I'm clever".

Quite. More than anything else, chess reminds me that I'm a moron.