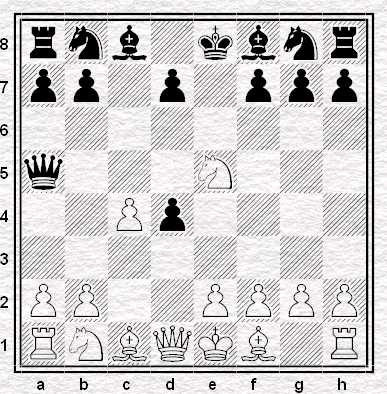 Today, as you can see from the diagram, we’re back in the land of brevity.

The game is from the Folkestone Olympiad of 1933. Our man playing the White pieces is Robert Combe who, according to Fox and James in The Complete Chess Addict, went on to become British Champion. I can’t tell you what year he won the title though. Does anybody know?

Unfortunately, I’m not sure we can accept it as a legitimate entry for the Briefest Decisive Game Between Masters award. Yes it’s shorter than the efforts of Anand, Alapin and Shirazi. Yes, unlike Gibaud – Lazard, it definitely happened. The trouble is I don’t know anything about his opponent other than his name was Hasenfuss and he represented Latvia.

Happily, whether or not Hasenfuss was of Master strength, there’s an even shorter effort available. 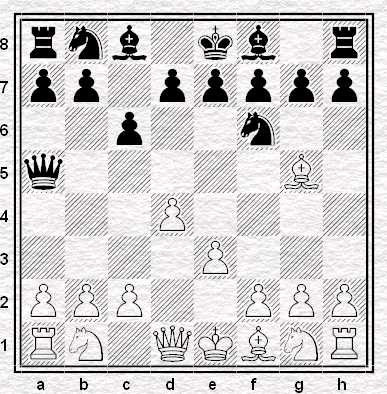 I’ve known about this game since I bought TCCA twenty years ago. I’ve even tried to trap Dave V like this many times in blitz games but, sadly, he never takes the bait.

I wasn’t going to mention it here because there’s nothing to suggest Djordjevic and Kovacevic were Masters. CB Big Database says the event was an open tournament and doesn’t indicate the players’ strenghs so I think it’s safe to assume they were unrated.

However, last night I picked up an old Chess magazine at random (January 2002) and leafing through it I came across Fox and James’ “Addicts’ Corner” column. Amazingly they say this precise game also occurred in IM Vasallo (2454) – IM Gamundi, from the Spanish Team Championship in 1998.

I can’t imagine there’s a shorter decisive game between Masters out there but I’ve got one reservation. CB Big Database 2003 has hundreds of games attributed to both Vasallo and Gamundi but not this one.

Can anybody confirm it definitely happened? If so we can let Mauricio Vasallo enjoy the richly deserved glory of his small niche in chess history.
Posted by Jonathan B at 10:00 pm

There must be a billion and one variations on that theme.

Sources claim Robert Combe won the title in 1946. See also here. Or did you find these sources yourself but don't trust them? (these are just 2 of the many sources) I mean, what have you got Internet for, right? Please don't tell me the links don't work ;-)

This post was by another member of the club Edwin! Perhaps the whole of London is afflicted with barely functionning internet?!

thanks for the links.

In answer to your question ... the internet is there so people like you will look up the information i need but am too lazy to look up for myself!

btw: due to a clerical error the first draft of this article got published instead of the second.

and picked up a few easy points after surprisingly high graded players fell into ...Nxe4.

I was most amused to see Adams once punted this line against Kasparov... but sadly Gazzer spotted his cunning plan and played ...Bd7.

Aronian should have read your article Jonathan. He walked into the Bg5..Qa5+ trick today. Not in the blindfold game, either!