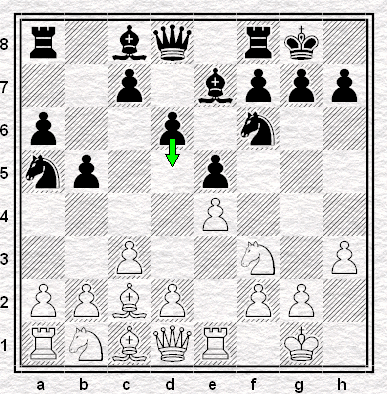 10...d5!
This remarkable move has been played a number of times in the past year, after the sequence 1.e4 e5 2.Nf3 Nc6 3.Bb5 a6 4.Ba4 Nf6 5,O-O Be7 6.Re1 b5 7.Bb3 d6 8.c3 O-O 9.h3 Na5 10.Bc2, one of the most common and best-known in chess. Yet despite its popularity (played by every World Champion from Lasker to Spassky) and its age (played by Chigorin in 1906 and by Schlecter four years before) it appears that none of the great players who have examined the position, in play and in preparation, over the course of a hundred years, saw what a young Polish grandmaster saw last year and played in a splendid game which can be viewed below.

The theoretical justification lies in sequences such as 11.exd5 e4! 12.Bxe4 Nxe4 13.Rxe4 Bb7 14.d4 Re8 with a lot of compensation for Black (as played for instance by Magnus Carlsen against Michael Adams and as reproduced on the ChessPublishing site where I discovered the analysis) or the moves played in the original game, in which the rapid advance of the f-pawn persecutes White's minor pieces and his king position.

Whether it's sound or not remains to be seen. The Marshall Gambit is ninety this year (and nearly seventy in its present form - was CHO'D Alexander really the first to play 11...c6, as Chessbase Online Database suggests?) so Gajewski's Variation has a long road ahead of it. But what a discovery!

Sometimes (often actually) chess makes absolutely no sense to me.

As far as I can see this is just playing a Marshall a couple of tempi down ... one to move the d-pawn twice and one to put the knight on the edge of the board.

Why 10. ... d5 doesn't just lead to a clear disadvantage for Black is completely beyond me, but apparenty it doesn't.

I was impressed by this idea also when I annotated the game Charbonneau - Benjamin, US Chess League 2007, for our website. I'd be interested in any analysis -- it seems a very hot line. Maybe White's best is 9.d4 to avoid it.

Wow. Presumably not the strategic quiet game you hope for as White, when going down what should be the mainline Closed Ruy... That really has to count as assault with a deadly pawn.

Great, something else for us poor 1.e4 players to worry about!