I record all my serious games in scorebooks: I always have. There are a number of reasons why. One is a certain obsessiveness - a touch of autism, my mother used to claim - that causes me, for instance, to organise my bookmarks and my emails into elaborate and pyramidal series of folders. (No doubt it is that obsessiveness that attracted me to chess in the first place.) Another is the healthy - or healthier - purpose of learning from my games by playing through them afterwards, which is easier to enforce if I oblige myself to copy them into a scorebook. I do this the same day or the next, if I've won: if I've lost, it may take place within a month.

But a third reason is that I am obliged to copy them, slowly and carefully and with the help of Tippex, if I want ever to be able to read what I have written. My handwriting - unless I write slowly and carefully in the way that one does not during a chess game - has been illegible almost since I was old enough to read and write. I can barely read my own scrawl, and reading a scoresheet, if I had not played the game myself I doubt I would be able to reconstruct the game at all.

Since I first played in tournaments, I have bought scorebooks and written my games into them. At first I wrote them directly - and illegibly - into the book during the game rather than use a scoresheet. But after the first few dozen efforts, I wrote them more neatly, after the game. I've done it ever since and, as a result, I have thirty years' worth of chess games written down and sitting in a bookcase.

It's the Complete Games of Justin Horton. Or the Almost Complete - since the very first scorebook, beginning with the junior section of the Hitchin Open in October 1977, starts not at round one but at round two, a game I lost, putting me on a score, so the book records, of 0/2. My opponent was Simon Roe, better than I was then and better than I am now.

I can't remember who my opponent was in the first round. A shame - I'd like to know who was my first opponent in a tournament. But fortunately (or otherwise) I can remember the opening. Nearly. Probably.

Not unusally for a junior game, we played symmetrically:

Now, I say I can probably remember. In truth, I can only swear to the first two moves and the bishops. I can't guarantee that the b1 knight or the g8 knight were moved, although I think they were. Nor am I sure, if they were, whether or not we castled next. But it's not important: the outline, the basic idea, is still clear to me now, just as it was not clear at the time. The position was something like this: 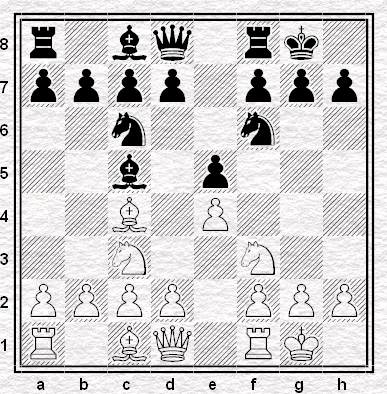 I saw An Idea. I don't know exactly where I'd seen it before. Presumably I had learned some very basic openings and perhaps I had seen it in the Vienna Game with 3.Bc4. I take the e-pawn - or the king pawn, as I would have known it at the time - with my knight and when the opponent recaptures, I have a fork with the d-pawn and I get my piece back.

It must be good, I read it in a book. So I did it. I took the e-pawn and he took the knight - and I was lost. Half-a-dozen moves into my tournament career, my life in chess, and I was already a piece down.

Well, if we could turn the clock back we would all win a lot of money on yesterday's horses. But I would also take the trouble to have my twelve-year-old self play something else instead.
Posted by ejh at 1:35 pm

coincidentally I'm currently working on a talk on basic opening principles for the library players.

It's going to be based around a game that starts,