The Worst Move On The Board IV 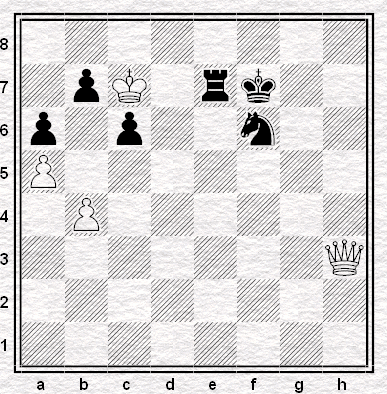 Dozy of me: I first saw this position a few weeks ago but it didn't occur to me until reading it again in New In Chess that it was a contender for this series.

Bu Xiangzhi v Hikaru Nakamura, the first place play-off at Gibraltar - the second game of two, Nakamura having already won the first one. Here, in the second, he has constructed a fortress that should get him a draw and win him the tournament. Even so, there's one move available to White that's distinctly worse than all the others: and he found it.

When I first saw this I wondered if Xiangzhi, needing to win but believing there was no way through Nakamura's fortress, had decided to finish the game in a certain style? A draw or a loss amounted to the same and losing the way he did was an efficient way to conclude the game.

I reckon he'd have said so if he had.

Is it on video or anything? That would probably tell us simply from the body language.

Can I end these arguments. I have played the worst move of all time, which is frankly unbeatable. I had mate in one. Instead I chose the weaker move 'Resigns'. And no I wasn't in time trouble. And my opponent didn't spot it either! I was 125-130 strength at the time.

If you'd care to supply us with the game I give you my personal guarantee that I will put it on the blog.

But not in this series, which requires a move to actually be played.

As for missing mates in one, though not, I grant you, actually resigning, there's also this...

Thankyou. May we know the identity of the player of the White pieces? (Not compulsory, just preferable....)

Presumably there was not actually a White rook on g1?

Don't particularly wish my name published as doubtless it will increase the criticism of me as a weak player. But we played(ejh)on 5/7/03. As you keep your games you should find it easily. You should have won but I did some dancing with my knights.

And there was a rook on g1. Otherwise he could have mated me in rather trivial fashion.

By the way (ejh) you once wrote a great article on 'Jaws' in Kingpin. Any relation?

And there was a rook on g1. Otherwise he could have mated me in rather trivial fashion.

I presumed you resigned because of the mate threat on h2 and if Qxg3 then Nxg3+ Kh2 and Nxh5 picking up the rook on h5.

But even if you hadn't seen the mate for you on h8 why not just play Rxf1 stopping the mate and winning the piece for free?

That's why I thought there might not have been a rook on g1.

Or maybe I have the position set up wrong.

I see what you're getting at. rf8, f7 means rooks on both squares. Therefore rxf1#

But we played(ejh)on 5/7/03. As you keep your games you should find it easily. You should have won but I did some dancing with my knights.

No problem, your anonymity will be preserved along with your fame.

And no relation, no