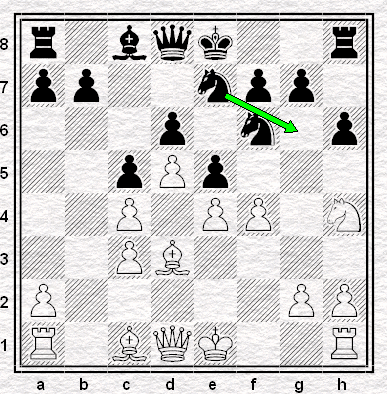 11...Ng6!
Like, I should think, nearly all my generation, the first player whose games I really knew was Bobby Fischer: I grew up on My Sixty Memorable Games and Gligoric's book on the Spassky match. I learned the rules not long before that match, and so I learned how to play in the years that followed, playing over Fischer's games at the same time as I was first discovering the rudiments of tactics and positional play.

I think this is why I remember this particular move with such affection: it seemed both baffling and magical to me, the greatest player in the world simply ignoring everything I had been told about pawns and pawn structures, inviting Spassky to double his g-pawns, isolate his e-pawn and establish a protected passed pawn for himself on d5. Incomprehensible madness. Yet from that point on, Spassky seemed as bewildered as I had been. That was the impression the game left then, and, perhaps, still leaves today: that Spassky really was baffled by the sort of moves that Fischer was playing, in the fifth game as he had been in the third.

After I began to write this piece, I remembered. A few years ago, but around thirty years after I first saw and loved the move, I had the chance to play it for myself. It was a Christmas tournament in London, the first round: the same position I'd seen three decades before, when I first started out in chess. I took my chance. I won. The magic works.