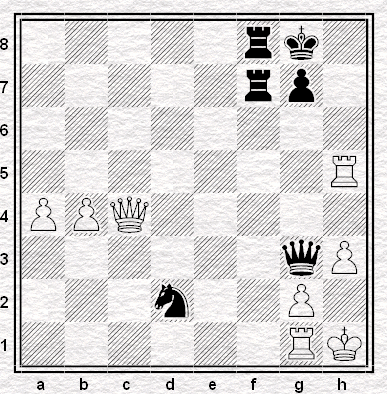 Tim Krabbé, the Dutch chessplayer and novelist, has on his website a feature The Ultimate Blunder, in which he has collected 35 different examples of players resigning in positions they were winning. He calls this "the ultimate blunder" and it's hard to quarrel with the description.

The ultimate ultimate blunder, presumably, would be one in which a player resigned having mate available on the move, and, through the kindness of our good hearts and a contributor to our comments box, we're able to provide readers with this very specimen, this very day. It was sent to us last week as a comment on the latest in our series The Worst Move On the Board, claiming to trump all other contenders, even, for that title.

For me it doesn't qualify under that rubric, since resignation, by definition, isn't a move: it's a refusal to make any more moves than one has already. But it does fit Krabbe's criteria and, it seems to me, cannot be bettered. White had mate in one: not seeing it, he preferred to resign instead. You can't get any more ultimate than that.

The position at the top of the column is from Anonymous-Crews, Evening Standard, approx 1981. Play continued from the diagram 1.Qh4 Nf1 leading to the following position: 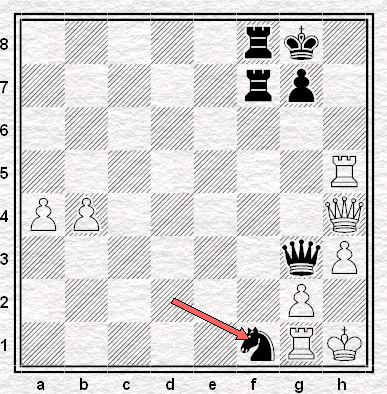 White has mate in one available (I'll not insult your intelligence by pointing it out). But the move was never played - and nor was any other, since White saw fit to resign in the face of what seemed to them to be inevitable defeat.

Magnificent. Naturally I would have preferred the victim - who will remain anonymous unless and until he or she wishes to be otherwise - to be Nigel Short, but magnificent nevertheless. I cannot ask our readers whether they have done any better, since no better than this can possibly be done. But I can ask - can anyone match that?
Posted by ejh at 8:35 am

Which of use made the bigger mistake?

It was definitely 1981 - Summer. It's the name of the tournament I forget. West Centre London I remember it as, but am sure it had an Evening Standard Connection.

What about resigning when you've been offered a draw? I'm afraid I can't remember the match details, but it's listed in The Even More Complete Chess Addict (Mike Fox and Richard James)

My sister once played a game with me. She was white, I was black, and I had a heavy advantage against her. But then she made this simple move with a bishop that suddenly turned the game around. I was on the ropes. I had no idea how to counter the threat. It was a brilliant move.

The bishop she moved was black. It took me five minutes to realize that it was my piece. Whose was the bigger blunder there?

I also think it's quite weird that black didn't do anything to prevent this obvious mate though, he could have done quite a few things including a very blunt capturing of the queen, then playing on with the knight advantage.

I remember playing an interschool competition game in Australia circa 1990. Our player, possibly board 3 in C grade had a mate in one he could play and it was his turn to move. The opponent from the other school realised it and offered a draw. Our player was to smart to fall for that and declined the draw. He then missed the mate in one move and played something else. The opponent responded with his own mate in one. Not as bad as the diagrammed situation above but memorable :).