Starting Out: The Dutch Defence

Last time I was up at Golden Lane (for the London I v Wimbledon match), GM Neil McDonald happened to be sitting at the table directly behind me.

I was pleased to take the opportunity to thank him for the work he put into his book on the Dutch which I bought recently. Unlike many of the chess books I've bought over the years, which number far too many, this one happens to be pretty useful. It's not a theory-heavy tome but does a very good job of explaining the basic ideas behind the three main branches of the Dutch Defence.

Good though it is, the book managed to reinforce a confusion concerning one particular position in the Classical Dutch that I've been suffering for around twenty years.

On page 76 McDonald writes that in the line that goes, 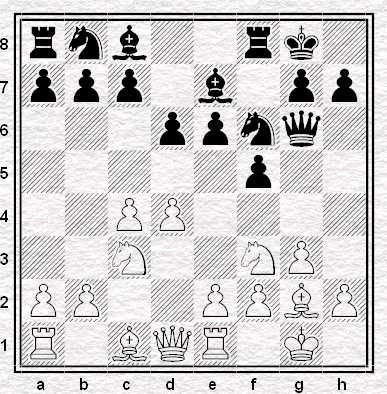 there is no need to prepare e2-e4 with, say, Qc2 because after 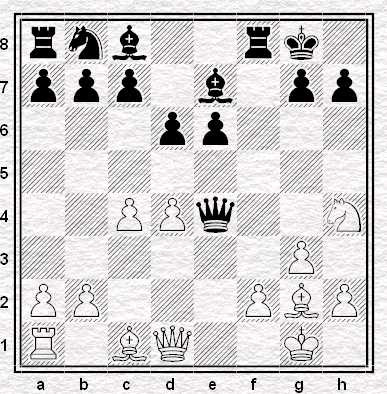 I remember reading this little snippet somewhere or other not long after I first started playing club chess in the mid-80s. I confess that at the time I simply didn't understand the claim because even back then I could see that after, 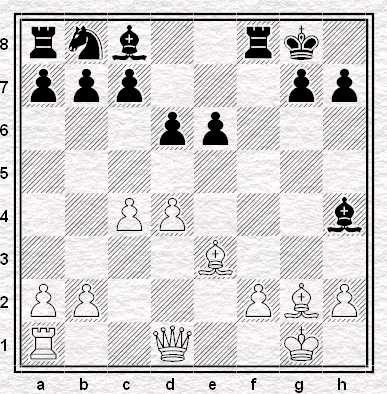 Far from blundering away her majesty completely, Black has rook, knight and pawn in exchange for the queen not to mention pressure along the f-file and the somewhat passively placed White bishop on e3. OK, Black's entire queenside is undeveloped but is this variation really so worrying for him?

I decided to have another look at this position to see whether twenty years on with a few extra resources, and hopefully a bit more chess knowledge, I could finally work out why everybody just dismisses ... Qxe4. Unfortunately, I'm still not much the wiser.

To my surprise Megabase 2007 was really not very helpful at all. It contains just three games in this line the first of these being San Segundo - Cenal Gutierrez from the Spanish Championship of 2000. Play continued, 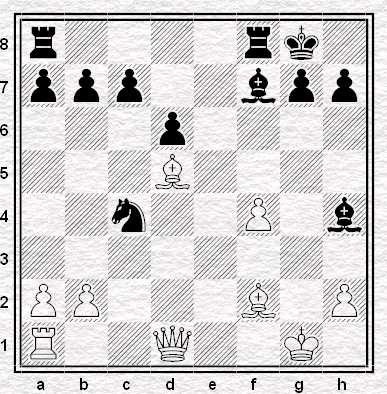 and the game was agreed drawn.

In his 2003 book "Play the Classical Dutch", Simon Williams assesses the final position as slightly better for Black. No doubt the fact he was rated a couple of hundred points below his opponent helped persuade Cenal Gutierrez to accept the half point here.

Williams, who has at least given some thought to this position, considers 15. d5 to be worthy of a ? and suggests instead that White play 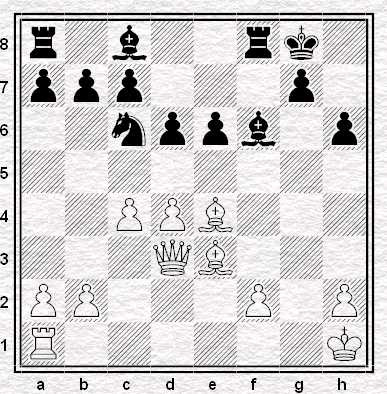 when he feels that White is clearly better. "It would take a brave or foolish man to try this line again as Black."

Now this makes much more sense to me because White's got everything pointing at the Black king but whether this justifies the claim that Black "can't" play 11. ... Qxe4 I'm not so sure.

Of the three games in the database, then, White doesn't win a single one - and this despite the fact that for the two games where both players have a rating he comes out on average 190 points higher rated Black. It's also worth mentioning, I think, that on each occasion the player of the White pieces has not been a total muppet but has been rated well over 2000.

I'm sure that 11. ... Nc6 (the theoretically prescribed move) is an improvement for Black but nevertheless the claim that queen takes rook can't be played just doesn't appear to be justified. Williams' "?!" and observation that, 12. Nh4 "is a bit embarrassing for her majesty...." is much more on the money as far as I can see.

It's an example, I think, of something getting written just because it's always be said in the past and not many people stop to think whether it's actually true. It's an all to familiar problem with chess books and even authors who take as much care as McDonald does seem to be affected by it.

Still, don't let all this put you off Starting Out: The Dutch Defence. A few niggles aside, it really is a very good introduction to the opening and I can warmly recommend it to any lower and mid-range players who are interested in investigating the Dutch from either Black's or White's point of view.
Posted by Jonathan B at 2:23 am

Williams, who has at least given some thought to this position, considers 15. d5 to be worthy of a ?

Well, yes. I mean why play it? Why invite the knight into White's position?

In general - when you read books on the Dutch, positions are very often given as good for White on positional grounds that look quite scary if you're a club player holding the White pieces.

I've often struggled on the White side of the Classical Dutch - in odd contrast to the Leningrad, where I tend to do extremely well - because although I know that in theory e6 is very weak and Black has an undeveloped queenside, and that aggressive attempts should therefore fail to some sort of strong counter-action in the centre, in practice it can be hard to find the timing and the nerve to put this into practice. Given aforesaid time, in an email game, I was able to do rather better.

Fair enough about 15. d5 Justin ... but my point is that this line is just routinely dismissed and yet when a 2500 player takes on somebody 300 points below him he struggles to draw.

I'm not claiming Queen takes Rook is a good move or leads to an advantage for Black or anything like that ... just that the claim that the rook "can't" be taken is a bit lazy.

I find that chess books often dismiss lines/moves without stating why. Obvious mistakes to a GM, need explanations for a club player !

I think he doesn't really like 8.Re1 ( the Winter variation, named after the English master William Winter ) as he describes it as follows...

"As has been observed previously, in all normal Dutch positions Black's pawn structure is the more rigid. With other factors at parity, this confers on White an advantage in flexibility - a quality which is manifested in moves acquiring a duality ( or unusually, a plurality ) of purpose. Since this duality is more readily achieved in positions rich in possibilies, it follows that White's correct strategy should be to conserve his strategical options, promote complexity and - the corollary - avoid premature clarification.
The plan initiated with 8. Re1 adheres to none of these principles. Instead it largely removes any element of stategical ambiguity and thus crystallizes the struggle into one of mainly tactical dimensions - and here Black's resources are by no means inferior to White's."

Perefctly clear to me, and without reams of variations ! White complicates, Black simplifies.