The Streatham and Brixton Chess Club Championship 2008 has reached its half-way point, and has already witnessed much excitement and several surprises. Top-seed Robin Haldane has dropped a whole-point having been mated improbably in the third round by Angus French, who along with Alexey Shumay leads the field with a perfect 3/3 - whilst the second-seed and present writer alone follows them on 2½/3. Only half a point behind a group of five players have 2/3 from the field of 20, all also chasing the first prize of a year’s free membership. The same prize goes to the highest-finishing player from the second half of the draw, whilst a chess computer goes to the highest-finishing player from Streatham Chess Club, and there are other book prizes too. The final three rounds take place Tuesday 13th May from 7.30pm. 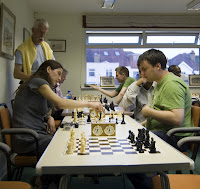 Here's my drawn game from the second round against Barry Blackburn: an exciting battle where my opponent might have played on for a win at the end, had he not been so short of time, and another Interesting French Exchange. 17...Ne4! is particularly noteworthy decision, obtaining black the initiative for a pawn, as is the thumping 29...Rxg2+!, a move white had entirely missed.

Finally, thanks go to Vad for the excellent photographs, which I recommend you click on in order to see full-size versions. 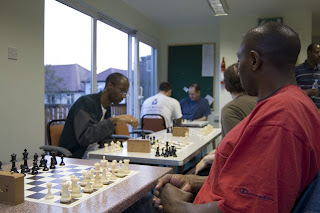 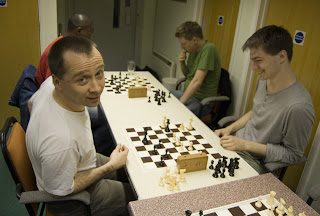 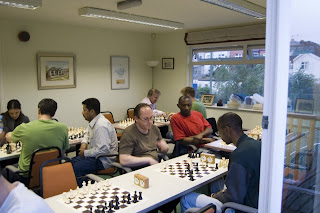 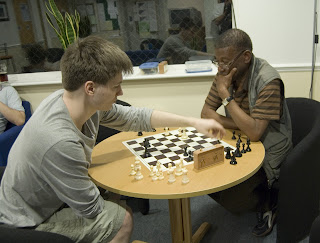 Considering Vad captured me the very instant after I resigned against Alexey that picture didn't come out too bad - mind you if you notice I'm about to keel over and as the full realisation of the level of my chess incompetence has just hit me.

people should really click on the second photo in the story ...

it would make for a great caption competition.

I want to know what so surprised martin - and what's going on with Chris and Robin in the background?

although clicking for the full-size version of the ending of my game with Alexey is not recommended.

I look like a seal that's about to be clubbed to death by some Canadian fisherman.

In the second photograph, I wonder if that was the moment that Zornitza blundered her good position away to a back-rank cheapo from Adam?

I like the fact Alexey laughs in the face of your resignation!

Is that a fag packet or a camera? Or both?

Rothmans and a mobile phone I think.

Perhaps it's an invisible cigarette that Martin's got hold of?

I think the second picture down is my moment of resignation against Robin.