If you want to know how bad you are, ask your computer. On arriving home from my weekend in England at the 4NCL I ran my games through the computer - and I do not much like what it has told me.

My final round game from the Monday, against a FIDE Master, should appear some time next week, for no better reason than I won it: I actually played all right, if "thinking you are losing when in fact you are not" can be so described. My Saturday game was agreed drawn in a position Rybka rates as a pawn and a half better for my opponent: I suspected as much when I offered it. But Sunday....

...well, I already knew I played so badly that I apologised to my opponent, the next morning, for having won the game. I knew that there was a dismal series of dismal errors, first by myself and then by my opponent, beginning roughly around my 20th and proceeding a little beyond his 30th (30...Nb2, for instance, wins very easily). There were more errors than I imagined, both within that passage of play, and without.: but that was, at least, in time trouble (fourteen minutes for my last fifteen moves, three for my last ten) and at least I knew already that I'd played quite badly at the time.

But what happened after the time control, which came when the following position had been reached, is beyond all belief - and beyond all understanding. It wasn't just missed by both players with an hour on the clock: it was missed in the post-mortem afterwards. It was not, however, missed by the computer. Had my opponent seen it, it might have beaten all previous contenders for the most completely won position I had ever failed to win. 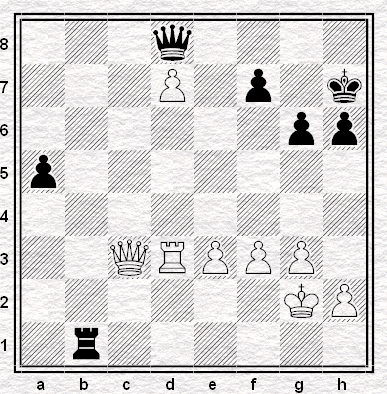 As it is, seeing White's 44th, Black resigned. But what did both players miss during this sequence?

Well, it may be that making assumptions was my problem....

Phil Bonafont has had more of his share of horrible tactical moments. Check out the game Bonafont-Rudd from the last British for more details.

Not having a board to hand, can someone confirm if the following holds up?

but I can't see what happens in the line

Hi Campion - you're missing several things but I won't spoil them for you by telling you....

Oh, all right then.

First, if the king goes to f3 then after ...Qb2+ it doesn't escape: there's a check on b4 and if the rook intervenes then ...Qb5 threatens mate. If the rook then goes to d2, the black rook goes to a1 and there's a perpetual after White promotes. This is hard to see and I didn't at the time! Mind you, this is because I didn't get beyond the king going to e4 - I just felt, probably prematurely, that that was not likely to be any good.

Meanwhile if the king goes to h3, Black has ...Rh1 threatening mate and White is obliged to sacrifice the queen at g8 to gain time to promote with check if he wants to get out of it. And after that it's going to be a draw.

But what I'd actually planned was a line you haven't considered, wihich is 44.Ke2 Qb2+ 45.Rd2 - which fails fairly trivially as a winning attempt to 45...Qb5+ and the king finds himself on e4 again.

What's most stupid about this, perhaps, is not missing the tactics as such, but failing to play the commonsense 41.Rd2 which blocks off all Black's possibilities on the second rank. You'd think, having passed the time control, that I'd have had time to reflect and make it safe. In point of fact it forces 41....Rb8 and then 42.Qe5 wins straightaway, but even if that were to be missed and, say, 42.Qc6 selected, there's only going to be one result given a modicum of care. God, it would have been embarrassing had Phil seen what I missed. And of course, he had an hour to spare too.