Insults from the Ether

What do the adverts on chess sites tell you about chess players? According to chess blogger tanc(happyhippo), that "chess players are a pretty sad, lonely bunch"! That's because his favourite chess site has recently been advertising what looks like a mail-order Russian bride website. Mm . . .

But perhaps he shouldn't feel so insulted. These adverts, like many on the web, appear to be automatically generated according to the words used at the site itself, and it is hardly a surprise that the word "Russian" would have come up frequently.

Although, I know how he feels. A feature of google reader - something I use extensively and recommend to anyone who keeps up with more than one website - is to recommend websites to its users that it 'thinks' they might like, based on comparing what they read online to what other people read online with similar interests. I normally get recommendations for chess, of course, also for news, politics, sometimes sports and other games, sometimes cartoons and comedy sites, that kind of thing. But recently my mouth fell open as the reader recommended London Geek Dinner to me - "Where geeks in London come out to play".

There are only 10 types of people in this world.
Those who understand binary, and those who don't.

Nothing geeky about that, right?

Mm... If only there was a site for over-sensitive people in London - "Where over-sensitive people accidentally offend one another" - google reader would be recommending that to me now instead. After all, I recently found myself feeling insulted for not being chessy enough whilst reading Yakov Neishtadt's excellent (especially for £1) book Test Your Tactical Ability, Chapter 12 of which is called "Do you know the Classics?"

Of course I know the Classics, I told myself, expecting to wheel off a 23...Qg3!! here, something Evergreen there, and somewhere in the mix throwing away a pair of bishops for a pair of kingside pawns. But in fact, the first three classic tactics were completely new to me, and many of the following, too. Here is one I particularly liked, where it's white to play and win: 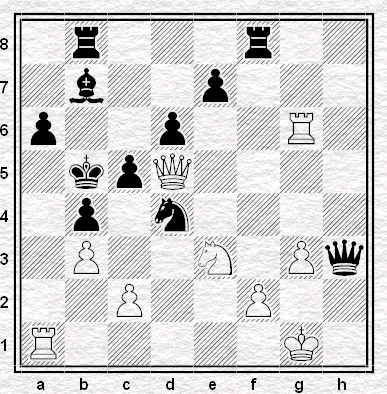 Now there's a kind of beauty to outlast the debatable delights of any mail-order marriage.
Posted by Tom Chivers at 9:36 am

Doubt I would have seen it unless someone told me "White to play and win. No I'm serious!" :)

Yep. It's from Philipp Stamma's 1737 book "The Noble Game Of Chess" incidentally.

1737 indeed. I find that amazing. It looks such a modern position (albeit the BK on b5 takes some explaining). It's obviously contrived to work after the plausible 22...Nd4. But even so, I bet it stunned people nearly 300 years ago.

It made me smile when I saw the idea. Nice. But as Armin says, it's easier to find when you know something is there :-)

Just so you know: GeekDinners aren't actually that bad. Not that much geeking out going on, more eating, drinking, and general socializing actually.

Thanks cristiano, no offence was meant. I am probably suffering from a bit of cognitive polyphasia about the term geek. I have to confess that more or less each time I sit down to watch Battlestar Galactica with my girlfriend in our flat, I herald the joyous event with the celebratory phrase: "Set condition geek throughout the flat" . . .

Don't worry Tom. There's no way you are a geek. How could you be using phrases like "cognitive polyphasia". Maybe there's hope for me yet- I've no idea what that means!
Andrew

Blake's 7 is where true geeks are at.

Sorry to intrude. A Geek in the USA is someone who is really passionate about something without any hint of being insulting. I know, this isn't the USA ( good or bad ) but it's worth knowing. Emma was interviewd by Geek TV and they were really upset when we told them the meaning over here.
David Bentley.