Hack and counterattack at the 4NCL

Here's a couple of good efforts from the last weekend of the 4NCL. Contrasting efforts too, and unsurprisingly, given that the winners were Robin Haldane in one game and the present writer in another. Robin's game was his nth win with the Haldane Hack: mine, my fifth win against a FIDE Master.

A couple of diagrams. The first shows Robin's game after Black's 13...Qe7-f8: 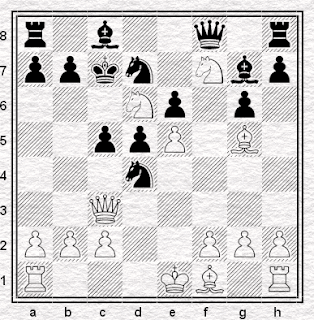 it's the sort of position where you start counting the pieces to see how much Robin's sacrificed so far - and then, when you find the answer's "none", you wait to see how much longer before Black resigns. "Not long", as it happened.

Robin does attack, I do defence: here's the position after White's 25.Kg1-h1. 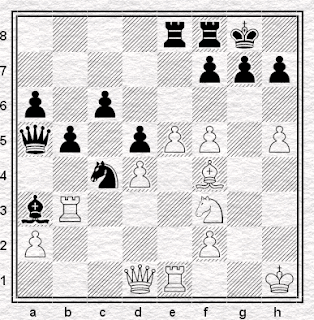 All White's pieces are steaming over to support the pawns' assault on the Black king: more than half of Black's pieces are far away and there's a forest of their own pawns blocking the way between them and the battlefield.

You'd think they'd never get back in time. But they did.

Have you two ever met in a competitive game?

Tyson Mordue and I have played many competitive games over the years, mostly in the Bristol League and the Somerset League. It's good to see he's finally got his FM title.

Yeah, I agree. I asked him before the game, "how long have you been an FM then?" "About three months", he said...

Is he playing in the British this year then? (the strange entry fee alteration having been introduced that FMs only get discounted entry fee if they qualified in the last 12 months)