Let's agree that both the PlayChess server and the ChessClub server have two fundamental but surprisingly useful flaws: One, that you have to pay to really get the most out of them. Two, that you have to download software to use them. The latter flaw makes them unlikely candidates to destroy your desk-job, to leave you staring into your computer screen until the early hours, as life bubbles on all around the city without you, as you play out just one last 1+0, before finally getting down to that report due yesterday, that you tell yourself you're really about to do, this time... Meanwhile, the former flaw creates a prosaic boundary many flinch at crossing, for reasons of personal finance, pride, self-image, priorities, whatever. Thus we can find it within ourselves to resist these two perfect dealers of the stuff our addiction is made, to deny ourselves their unending rollercoaster ride of adrenaline and dejection, mixed with lectures and live coverage, ending with a migraine. FICS - free but otherwise similar - has a distinctive second flaw: the general absence of any strong players there to play blitz chess. So, we can stay mostly safe from the evil that all three might bring to our lives, and their flaws for our addictions are revealed as really gifts to our sanity. 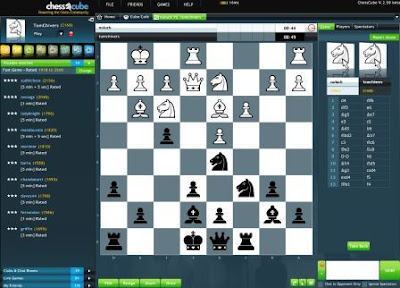 Now, imagine a chess website, free to use, requiring no software, capable of the same kind of chess, smoothly running blitz, that kind of thing, and strong players to boot; imagine the danger to our daily life. On which note, allow me to introduce: ChessCube, which I've been trying out this week. First of all, the positives. The interface is attractive, the playing board smooth, there are extra features like chat-rooms, and all the normal things you'd expect, like choice of time-limits, take-back requests, pre-moves, that kind of thing. There are also strong enough players to decimate me. (For comparison, when I used to play on Playchess or Chessclub, my rating would typically bobble just a bit under 2300.) Although, there are several downsides, too. Chesscube is still in beta, and sometimes it really shows. Occasionally you will be disconnected without reason, sometimes various features freeze, and for a while every time I accepted a rematch, my opponent and I switched colours - but did not switch clocks! And whilst there are strong players, there aren't that many, yet...

So, there you go. You've been warned. Use with care. And in moments of particular weakness, recall the words of HG Wells:

The passion for playing chess is one of the most unaccountable in the world. It slaps the theory of natural selection in the face. It is the most absorbing of occupations. The least satisfying of desires. A nameless excrescence upon life. It annihilates a man. You have, let us say, a promising politician, a rising artist that you wish to destroy. Dagger or bomb are archaic and unreliable - but teach him, inoculate him with chess.

(On the other hand, if you are feeling bored out of your mind, your finger twitching over your mouse as if a trigger, recall that Soren Kierkegaard wrote: "boredom is the root of all evil, no wonder, then, that the world goes backwards, that evil spreads. This can be traced back to the very beginning of the world. The gods were bored; therefore they created human beings." And human-beings created chess to cure boredom, to keep us from evil. At least, that's what I've been telling myself.)
Posted by Tom Chivers at 11:05 am

On a completely different note, remember that tomorrow night, A Vote for France is a Vote for Chivers.

Hmm... It's a Friday afternoon before a Bank Holiday Monday. What should I do next?

I have signed up as nma (short for New Model Army). Looks a good interface. Could be a good site to have some casual games on and not worry about ratings. Would be good if a few Streatham players started playing here. Don't much care for the annominity (probably didn't spell this rite- sorry ejh!) and/or abuse that is a feature of many chess servers.
Andrew

No rest for the wicked...

Why is a vote for France a vote for Chivers? NMA - not a group I like but deserving credit for appearing on TOTP and then dropping straight out of the charts the following week (more than once), years before everyone else started doing it. See also Fields of the Nephilim - even worse!

Check the song out that I linked too, the lyrics...

The reason why groups like NMA and Fields of the Nephilim (my favourite 2 groups) drop out of the charts immediately is that they have very strong (but small) committed fan bases. The fact they don't gain general popularity is of benefit to their fans- it keeps ticket prices low (football teams would be a similar analogy) and means the group does not get rich so they have to keep going/don't get lazy/influenced by money and stop or start churning out bland stuff. People generally get more enjoyment by following niche groups/football teams etc and in the case of music groups it isn't the case that the most popular groups are necessarily the best (unlike in football).Sorry for going off-topic btw
Andrew

I thought it sounded like Chivers in the lyrics but obviously it wasn't. So I looked up the lyrics snd it is! So new question - what is Sebastian Tellier on about? He loves Chivers anyway??

Andrew - their fan bases can't be that committed. They're both still going and long absent from the chart. Had no idea you liked FOTN when I mentioned them btw.

If you google around, you'll find out about a French film called Steak from a few years ago (2006?). It's about a dork trying to be one of the cool kids in his School, the cool kids who are in a band or something. The cool kids are called Chivers, or the band is, or something. Something like that. Along those lines. The French Eurovision entry this year was related to that film, anyhow.