Never let it be said we're not totally on the ball here at the S&BCC blog - well apart from yesterday when it wasn't until halfway through the opening round that we realised the British Championship had started.

In terms of S&BCC involvement Venkat, our London League top board, is playing and a the Ledger brothers are in Liverpool too. Stephen has been a club member for years but Dave and Andrew have also played for us in varying degrees of regularity. Since I'm talking of former S&BCC players I should mention Sue Lalic and stretching the concept of the S&BCC family still further I can see several names on the participants list that I recognise as blog commenters - Jack Rudd, Tryfon Gavriel and Michael Yeo for example (and apologies to anybody I've missed). The best of luck to them all.

The Championship website is showing the top boards live although due to 'technical problems' only a handful of games were broadcast. Hopefully there'll be the full 17 this afternoon.

T.C. EJH and I followed the games for a little while. Of the five on view it was probably Knott - Hebden that generated most discussion between us. 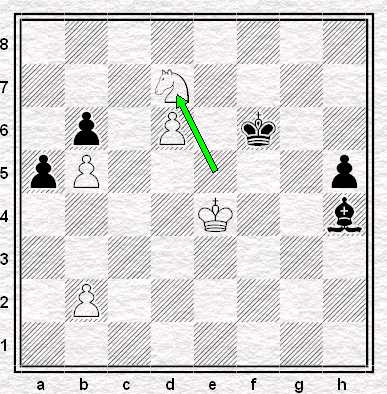 We, or at least EJH and I, thought Knott had winning chances but suddenly he played 51. Nd7+ and offered a draw. Hebden, not surprisingly, accepted.

EJH thought 51. Nf3 was worth a try. A little later Angus suggested White forced the draw since the knight has to stay on the kingside so there's no chance of queening any pawns anyway. Frankly, I've no real clue what's going on but my original feeling was that after Nf3 Black might be able to sac the bishop with 51. ... Ke6, 52. Nxh4 Kxd5. On reflection 53. Kd4 stops Black's king getting in so that doesn't seem to work.

So why not 51. Nf3 then? Isn't it worth playing on a little longer?

Live Games:
http://www.britishchess08.com/live.htm
Posted by Jonathan B at 8:35 am

We should also remember Nigel Davies, enthusiastic contributor to the comments box.

By the way, could anybody explain the pairing system to me? By my count, in the second round, there are fourteen players on 1 who are playing people on 0 or 1/2 rather than one another.

Sounds like the King's Head controllers have got hold of it.

(a) 55...Bg5 after which simply 56.Kxb6 wins: the knight is well placed to stop the h-pawn and the two advanced White pawns are too much for the bishop.

(I just looked it up in Fine and he says yes, Q v piece and pawns is a simple win. And indeed you an just put the queen on the d5 square, approach the Black king with the White one and then force him to the edge of the board for mate.)

Andrew Ledger on one of the show boards today. (click on the link in the main article).

ejh,
I checked the first line you give above with the comment "my gut feeling is that White is winning here although my theoretical knowledge is shamefully lacking" using Nalimov tables. This is a very difficult ending but a draw in theory. I would be happy to be White here.

BTW, you can check with Nalimov tables online at http://www.k4it.de/index.php?topic=egtb&lang=en

Mike Surtees' game is live - he's one of the great eccentrics of British chess. I once drew with him - having miscounted the pieces in time trouble and failed to realise I was a piece up.....

Glenn - thanks for that. How extraordinary. If I've correctly identified best play (which I wouldn't bank on, not by any manner of means) then Knott wasn't winning after all. I do hope that ending gets looked at by people who know what they are doing, I'd love to know.

I wish I'd known about those tables before reaching the ending of this game, I'd have saved myself hours working out which rook-and-pawn endings won and which did not. Though it presumably did me a certain amount of good working it out for myself*.

Typical of Mark though, he plays on 'til the bare kings...

Richard Pert having a bit of a nightmare, no?


Yes, he is poor and old and he was very tired (and very late for dinner). No excuse though.

I expect you will also enjoy my 17 move loss to Susan Lalic in Round 2 when I certainly wasn't tired.

Heh, I was already looking for it, but the games aren't loaded yet.